A Seat At The Table 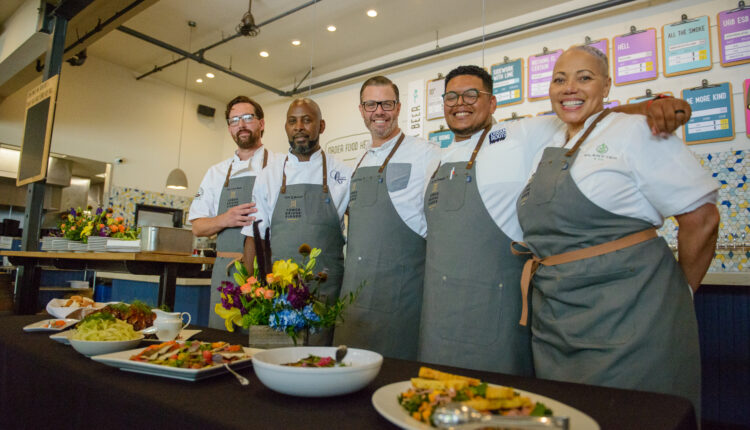 Something about the photos of past Tower Bridge Dinners didn’t sit right with Sonya Bradley.

“You start to notice that everyone is mostly White,” Bradley said. “That tells people they are not welcome here, unless they are White.”

The annual Tower Bridge Dinner has become a calling card for Sacramento, but has never featured a single Black chef — until now.

Bradley worked from the inside as Visit Sacramento’s Chief of Diversity, Equity and Inclusion to make one of Sacramento’s signature occasions look more like Sacramento — a city consistently ranked as one of the most diverse in the country.

Her efforts paid off. For the first time ever, three Black chefs will be featured at the nationally recognized event which each year transforms the city’s historic Tower Bridge into a world-class dining experience for 850 sponsors and guests.

Sonya Bradley, the Chief of Diversity, Equity, and Inclusion for Visit Sacramento, not only worked to make the Tower Bridge Dinner more inclusive, but the entire Farm-To-Fork Festival. She said, “We started a vendor impact grant specifically for people of color and the LGBTQ+ community to become vendors.” Verbal Adam, OBSERVER

A Black chief on the bridge is a huge milestone, but why has it taken nearly a decade?

“It’s like most industries, it’s who you know,” said Bradley, adding that White men control the upper echelons of the restaurant industry. “One chef may know another chef, and it turns out the chef may look just like him.”

To break this cycle, Bradley had frank conversations with Visit Sacramento president and CEO Mike Testa.

“You have to be willing to point those things out,” Bradley said. “And I can do that because I have someone who’s willing to listen.”

“It was a conversation of how we change who’s coming to the dinner,” Testa said. He explained that 2021’s invitation challenged sponsors to be more inclusive, encouraging them to bring someone who hasn’t been before. “It was amazing how quickly things changed. When you looked at the pictures from that year, it was much different than before.”

Mike Testa, President & CEO of Visit Sacramento said, “Sacramento is incredibly diverse. If we don’t represent everyone in the community, then it’s really not a community event.” Verbal Adam, OBSERVER

“The chefs were chosen because they are incredibly talented, capable chefs,” Testa said. “Also, when talking about inclusivity, if you’re not being deliberate about it — you’re not going to be inclusive.”

“This year, we have chefs who’ve helped with previous dinners but haven’t been at the forefront,” said Kari Miskit, Chief Communications Officer for Visit Sacramento. “I’m excited for people to meet them.”

“I got a knife and pried that sucker open,” Curtis remembered. “My cake would have burned if I waited on that oven.”

The Easy-Bake oven showdown would be the first test in an industry where women make up 50% of each culinary class, but only 5-7% of industry leadership.

Curtis has created her own seat at the table as a vegan chef. After launching a plant-based menu during her time as executive chef at Adventist Health in Roseville, Curtis continues to be a trailblazer in the plant-based industry. In 2018, she led an all-female team of chefs in a sold-out plant-based dinner for the James Beard Foundation. Today, she is the Director and Executive Chef of her company, Plant’ish & Co. Culinary Arts.

As one of the few women to ascend to executive chef, Curtis is well aware of the sexism and microaggressions of female chefs face — which she always calls out.

“I can relate to what any woman says she’s experienced in the kitchen,” Curtis said. “You know the difference between someone accidentally bumping you because the kitchen is tight from when someone is intentionally rubbing up against you.”

Curtis credits her thick skin to her father, Claude. She grew up in Los Angeles standing on milk crates peeling onions for his catering business, sometimes prepping for upwards of 1,000 people.

“I was schooled by my dad before any of this,” Curtis said. “He was a hardcore chef and taught me to never back down.”

As the first African American woman featured at the Tower Bridge Dinner, Curtis leads off the night with her Citrus Mustard Dressed Collard Greens salad. Complete with tender collard greens, black eyed peas, sweet potatoes, and a jalapeno cornbread biscotti, the vegan salad is a re-imagining of the prosperity meal that many African Americans eat on New Year’s Day.

“Most people on that bridge won’t have any idea of ​​my intent behind it,” Curtis said. “That salad represents me — I’m not going to be the plant-based chef that comes out with Romaine.”

Curtis’ flavor-forward food pulls the curtain back on veganism, showing that — at the end of the day — it’s just good food.

“I feel a responsibility to show up powerfully,” Curtis said. “When someone sees me, they’ll know they can do this too — no matter the cuisine and no matter who they are.”

Chef Greg Desmangles, Culinary Director at Pangea, Urban Roots Brewery & Smokehouse, and Bawk Chicken + Bar, said his Jerk King Trumpet Mushroom is an ode to his Caribbean roots and is “about being able to flex my culture and be proud of it. ” Verbal Adam, OBSERVER

Chef Greg Desmangles hid under the table while his mother, Regina, cooked when he was four. His mother debated with his aunties about whether grits were savory or sweet.

The self-proclaimed “mama’s boy” and “chunky kid” realized that — if he wanted to stay in the kitchen — he’d have to earn his keep.

“My mom started to trust me to do more than the chopping,” Desmangles, 30, said. “I became her sous chef in a sense.”

The Sacramento native never lost steam for cooking. He went on to take cooking classes at American River College and entered the culinary world bussing tables at Pangea Bier Cafe. A decade later, he is now the Culinary Director at Pangea, Urban Roots Brewery & Smokehouse, and Bawk Chicken + Bar.

While many Black chefs feel boxed into the soul food label, Desmangles wears the badge proudly. As an aficionado of the cuisine, he has studied the history of it in the book “High On The Hog” by Jessica B. Harris and Kwame Onwuachi’s memoir, “Notes From a Young Black Chef.”

Desmangles explained that there is soul food in all diasporas, but named African American soul food as his favorite.

“Southern soul food is prolific because we made do with what we had and our flavor was interstellar,” Desmangles said. “The essence of soul food is everyone sitting around the table feeling equal.”

As the youngest chef featured this year, Desmangles’ Jerk King Trumpet Mushroom is the second course and an ode to his Caribbean roots.

“This is me connecting the dots to my family’s history,” Desmangles said of the seared mushrooms glazed with jerk barbecue sauce. “After being recognized as a chef, it’s now about being able to flex my culture and be proud of it.”

Chef Q Bennett didn’t go to culinary school, he went to the school of hard knocks.

“It’s like bulldogs in the kitchen — no one wants you encroaching on their space,” Bennett said of his early days as a dishwasher. “But I was hungry for information.”

Bennett immersed himself in all things cooking: books, television, and international techniques learned during his service in the US Navy.

The Florida native stands on the shoulders of Black chiefs who came before him. He credits his mother, Phillis, who first showed him the ropes of cooking and cites nationally recognized chef Patrick Clark as an inspiration. In his professional life, Bennett names the first Black chef he ever worked with, Kevin Hightower, as pivotal.

“Those guys showed me a lot,” Bennett said of Hightower and his team. “They told me, if I stick with this, I could be good at it.”

Bennett is more than good.

As owner and executive chef of Q1227, Bennett’s “modern comfort” food combines his Southern roots with a California fresh flavor. Opened in 2019, the restaurant not only survived the pandemic, but has been recognized as one of the best places to eat in Placer County.

“Of course I want people to say the food tastes good,” Bennett, 52, said. “But what I want is for you to take a bite of something and start crying because you haven’t tasted it since your grandma prepared it.”

Bennett continues to support the next generation of culinarians, starting with the nearly 40 people he employs.

“I have people cooking who were washing dishes six months ago,” Bennett said. “If you come to work and show a willingness to learn, I got you from there.”

Bennett is no stranger to the Tower Bridge Dinner. Several years ago, he worked behind the scenes as a volunteer and last year he was an appetizer chef — saying that Bennett has earned his seat would be an understatement.

As the only Black executive chef featured who owns a restaurant, Bennett’s Llano Seco Heritage Foraged Fed Pork Ribs are the fourth course of the night.

“It’s just ribs done right,” Bennett said of the baby back ribs glazed with bourbon barbecue sauce and paired with an apple fennel salad. “They’re going to be absolutely delicious.”

Bennett is savoring this moment, but he is quick not to take all the credit.

“It’s not just the five chefs you see here,” Bennett said. “It’s the local farmers and ranchers who provide the food, it’s the people setting up tables and chairs, it’s the volunteers washing dishes — my gratitude goes to them because I was there.”

For more information on how to support the chefs and the Tower Bridge Dinner, visit www.farmtofork.com