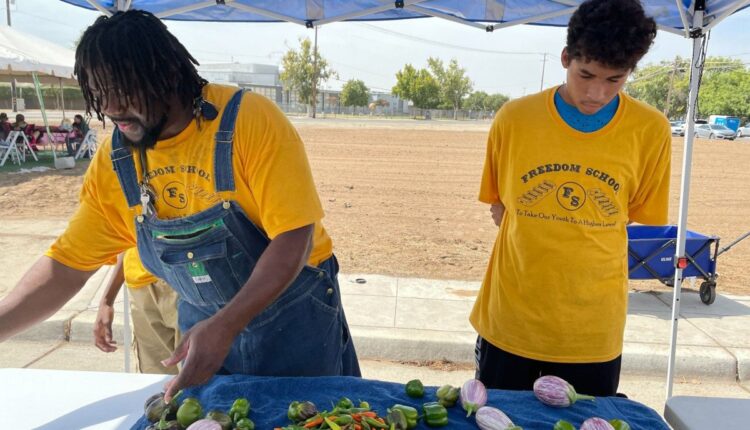 This story was originally published by Fresnoland, a nonprofit news organization.

“She taught me how to farm with just a little hoe and a rake,” he said in an interview with The Bee earlier this month.

“I didn’t notice she was planting a seed in me,” he said.

Today, Harris Jr. wears many hats: a farmer, an educator – he founded the Fresno Freedom School in 2015 to provide educational and job skills programs to K-12 youth – a pastor of west Fresno’s Free AME Ministries Church on 806 Collins Ave. , a former mayoral candidate who challenged Jerry Dyer, and a community activist based in West Fresno, which he and other locals refer to as the “Golden West Side.”

He’s also one of four farmers – three Black and one Latino – who together launched the Fresno Farm Box, a community-supported agriculture project, or CSA box, where customers can buy a fixed-price box of produce grown by west Fresno farmers.

“We have come to change the narrative in the 21st century” around who can be a farmer, Harris said.

According to the USDA, community supported agriculture is a model in which farmers sell their produce directly to their customers, “providing mutual support and sharing the risks and benefits of food production.”

In the case of the Fresno Farm Box, subscribers can pay for weekly boxes that come with an assortment of fruits, vegetables, and herbs. All of the items grown by the participating farmers — such as eggplant, tomato, okra, fresh herbs, watermelon and other seasonal produce — are grown without chemicals.

Founders of the program say it’s “historical,” given west Fresno’s lack of accessible, affordable fresh produce, as well as the relatively few numbers of Black farmers in general.

“A CSA program has never happened in the African American community here in Fresno,” Harris said.

For him, growing food is about more than just healthy eating.

“It’s what keeps our families together and brings people together – and that’s what we (African Americans) have missed.”

Fresno’s historic redlining resulted in many of the city’s Black and communities of colors being forced to live on the west side of Highway 99, what is now west Fresno.

Today, the area has high rates of poverty. An analysis of census data of the southwest Fresno 93706 zip code — which encompasses a large swath of urban and rural land southwest of Highway 99 — shows that 14% of the population is Black while 65% is Hispanic/Latino. Over 41% of the population lives below the poverty line.

“We look at west Fresno, it’s a food desert,” Harris said. “You see all this fast food, that’s not good for us (leading to) hypertension, high blood pressure, diabetes, (from) all this sugar, salt.”

The region experiences high rates of food insecurity, a term defined by Feeding America as a “lack of consistent access to enough food for every person in a household to live an active, healthy life.” As of 2019, Fresno County’s child food insecurity rate was 22%.

“Drive around – there’s a liquor store on every corner… pushing all this stuff that kills the body,” said Harris. Fresno averages one liquor store for every 1,000 residents, much higher than the state average of one per 2,500 people, Fresno city staffers told The Bee in 2020. “We’re pushing stuff that heals the body,” he said.

Hislop explained that while a desert is a living ecosystem, the word apartheid – a former policy of racial segregation against the nonwhite people in South Africa – embodies the food system’s structural racism and even “violence.”

“There’s violence in it because of the diet-related diseases and life expectancies that are shortened,” he said. “We’re trying to counteract that, which is a revolutionary thing to do.”

Currently, the Fresno Farm Box has about a dozen consistent customers from across Fresno – as well as one customer who drives down from Madera. The team recently received a funding commitment to help them operate year round.

Similar to other CSA programs, the Fresno Farm Box plan would require customers to make a 12-week upfront commitment of the harvest season, at $30 per box or $360 per harvest. Having this up-front commitment is essential to the success of a CSA program, as it guarantees a stable income for the participating farmers.

Each individual customer is “very, very important” Harris said. “We depend on that customer to purchase that box.” Small farmers “don’t have a lot of money or capital” and rely on their customers to be able to continue planting food.

Harris, the farmer, said that so far, the idea of ​​the CSA box has been well received, adding that he enjoys seeing people’s faces light up when they receive their farm boxes. “Their expressions (are) like, ‘wooow’,” he said with a smile, adding that it’s special for people to be able to pick up things like fresh lettuce, cucumber, squash, and watermelon right in their community.

Charrisha Hillery, CSA communications coordinator for Fresno Farm Box, said she has also seen a lot of interest from west Fresno residents on the Supplemental Nutrition Assistance Program. During an initial pilot phase, the farm box “really took off” with local families that rely on EBT, the electronic benefits transfer program that lets people pay for food using their SNAP benefits. Some larger households would buy four boxes a week to feed their families, she said. To make the food more accessible, EBT customers pay slightly less, or $25 per box.

When that happens, “we know our numbers are going to jump,” she said.

For Black farmers like Harris, growing is about more than providing food to a community; it’s about reconnecting with a difficult legacy.

Today, only a relatively small number of California farmers are Black. According to a United States Department of Agriculture 2017 census of agriculture, Black farmers accounted for only 429 of California’s 70,000 farms, or less than 1%.

This is due, in part, to discrimination that Black farmers have endured.

“There has been a lot of injustice that has happened since slavery,” including discrimination in access to capital and land, Harris said. “We haven’t had the same access as our white brothers have.”

In 1999, Black farmers filed a class action lawsuit against the US Department of Agriculture, alleging discrimination in its allocation of farm loans and assistance from 1981 to 1996. The USDA and the class settled the case. According to a 2013 report by the nonpartisan Congressional Research Service, Congress allocated over $1 billion for payouts to tens of thousands of Black farmers.

Ultimately, Harris said he hopes to inspire a new generation of Black farmers in west Fresno through the Farm Box as well as the Fresno Freedom School.

He said, “growing food for us is revolutionary.”

Melissa Montalvo is a labor and economic inequality reporter with The Fresno Bee and Fresnoland.