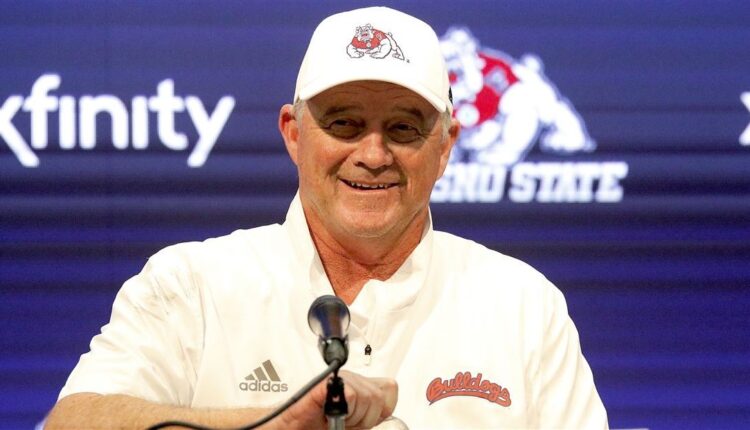 The Fresno State Bulldogs’ 2023 recruiting class doubled from six commitments to 12 in the span of the last 30 hours. The Bulldogs added six commitments – including three tight ends – over the course of Monday and Tuesday.

Fresno State hosted 18 recruits on official visits over the past weekend. Six of those players came in committed, and the Bulldogs have now scored commitments from six of the other 12 visitors.

The action began on Monday morning when Fresno City College offensive tackle Hayden Pulis announced his commitment to the Bulldogs. The Hanford High School graduate was a preseason All-American by JCGridiron.com, but missed his 2022 season with injury. Pulis tells BarkBoard.com he grew up as a Bulldog fan going to home games in the Derek Carr era and has attended games more recently to support Hanford graduates JuJu Hughes (2016-19) and Tyler Mello (2020-) on the team.

Then came 3-Star edge Isiah Chala, who holds an 86 rating by 247Sports had committed to the Bulldogs over offers from Cal, Oregon State and San Diego State. Chala was among the group of visitors who spent the weekend at Fresno State while the ‘Dogs were still celebrating last weekend’s Mountain West Championship victory at Boise State.

“That’s the thing I liked about them is that they had a great story this year,” Chala said. “They started off 1-4, and that’s hard adversity. Tough people look at it as a time to learn, move on and work harder and learn from your mistakes. Some programs might have just said, ‘Oh, the season is over. ‘ But they won eight straight, Mountain West Champions. I want to be a part of something great like that.”

– *VIP* Insider Interview with Chala – Listen to or read BarkBoard’s full-length interview | SALE: Join VIP for 50% off a year and FREE Paramount+ instantly! –

Monday closed with the first of three tight ends in the last two days. Six-foot-four Redlands (Calif.) Citrus Valley athlete Brock Lium made his commitment to Fresno State over offers including Colorado State, New Mexico, Rice, San Jose State and more from the FCS ranks. The do-it-all athlete had 52 catches for 780 yards and 15 touchdowns, plus three interceptions on defense and a kick return for a touchdown on special teams. In his junior year, he played as a dual-threat quarterback and also had 59 tackles.

The Bulldogs did not slow down on Tuesday with three more commitments, all within the span of an hour.

Justin Johnson sparked the second run, a 3-Star safety from Inglewood (Calif.) High School. He landed early offers including Florida State, Michigan State and Colorado State before making an early commitment to Arizona. Earlier this fall he decommitted from the Wildcats. The 85-rated safety announced his commitment to the Bulldogs on Tuesday.

Then came back-to-back tight ends. Richie Anderson, a 3-Star linebacker with an 86 rating by 247Sports, was committed to Colorado State but visited the Bulldogs over the weekend as a tight end recruit. He announced his flip from CSU to Fresno State two days after returning home from the visit.

The sixth commitment came from another tight end – Jake Tarwater from nearby Visalia (Calif.) College of the Sequoias. He was once a quarterback prospect from South Lake Tahoe High School in the 2021 class. In his transition to tight end, the 6-foot-4 and 240-pounder now joins the Bulldogs as a college-ready addition to the unit.

– Who’s next? Get the scoop where JuCo CB target A’marion McCoy stands after visiting Fresno State and Boise State – Join VIP now for 50% off a year AND free Paramount+ instantly –

Stockton Shelter for the Homeless Navigation Center to open