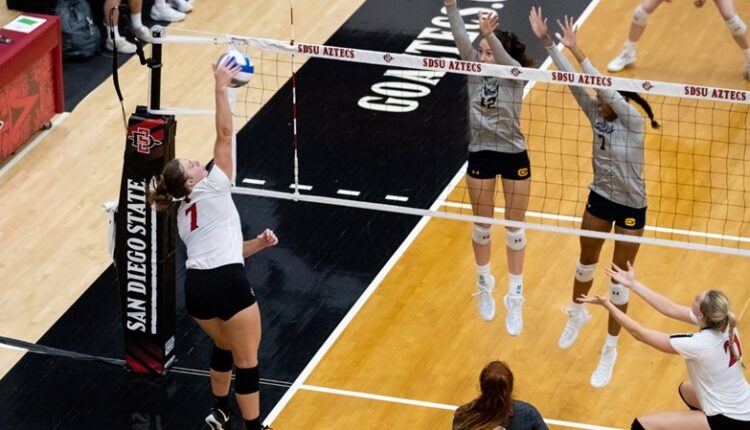 SAN DIEGO – The San Diego State volleyball team fought back from a two-set deficit on Saturday but couldn’t pull off the reverse sweep, as visiting Sacramento State hung on for a five-set victory (19-25, 26-28, 25-21, 25-22, 8-15) to close out the Aztec Classic inside Peterson Gym.

With the loss, SDSU suffered its sixth straight defeat, falling to 2-7 overall, while the Hornets snapped a four-match slide, improving to 3-6 on the young season.

The Aztecs received 15 kills apiece from Mikela Labno and Madison Corf, both of which were career highs, while Heipua Tautau’a reached the double-digit kill plateau with 14 put-aways of her own.

In addition, Tautua’a finished with her third double-double of the season after posting 14 digs, providing ample back row support for Ellie Geoghegan, who set a personal-best with 23 scoops, while Noa Miller (27 assists) and Sarena Gonzalez (23 assists) split the setting chores.

Despite maintaining a 61-55 collective advantage in kills and a 55-49 margin in digs, however, SDSU committed more attack errors (28-21) and finished with a 12.0 to 6.0 deficiency in team blocks. Additionally, the Aztecs were plagued by 12 service errors, while Sac State held a slight 10-6 edge in aces.

Still, the teams battled through an entertaining and competitive match, combining for 30 ties and 16 leads changes on the afternoon.

Trailing 2-0 in sets, SDSU finally broke through in the third frame, with Corf and Labno each supplying five kills apiece, while Tautua’a and Elly Schraeder floored two shots apiece in that span.

The Aztecs found themselves on the wrong side of a 11-10 score but took the lead for good following a Corf put-away, while the Hornets committed two straight errant attacks. Shortly thereafter, Sac State remained within striking distance at 17-16 following a Kalani Hayes kill and an SDSU attack error. However, the Scarlet and Black kept the visitors at bay down the stretch, as Corf launched three non-returnables, while Tautua’a and Miller each served up ace. Labno soon provided the clincher with a tremendous put-away to give the host school a much-needed boost.

The Aztecs rode that momentum into the fourth set, building a 17-13 cushion, as Schraeder and Kayla Rivera joined forces on a block, while each blasted a kill. However, Sac State responded with a 7-0 run, fueled by three Greta Davis kills and a Carrie Crom service ace.

Suddenly facing a 20-17 deficit, the Aztecs called timeout and subsequently turned the tables with an opportune 7-2 closing run to send the match to a fifth and deciding set. Corf and Schraeder powered down two kills each, while the Scarlet and Black benefited from a pair of Hornet ball-handling errors and a wayward attack in that span.

SDSU’s good fortune waned in the final frame, as Sac State used a 10-4 blitz to break a 2-2 deadlock to seize control. Tiyana Kamba-Griffin took center stage during the run with three kills and two combined blocks alongside Ashtin Olin, while Crom and Bridgette Smith each contributed an ace.

Davis and Ellie Tisko led the Hornets with 14 kills apiece, while Caitlin Volkmann (.375) floored 12 shots of her own, including the match-winner in set five. In addition, Olin recorded a double-double as well after dishing out 43 assists and contributing 11 digs, while Smith (3 aces) totaled 15 scoops in the victory.

Not to be outdone, Hayes was a key factor at the net with seven block assists, while Kamba-Griffin totaled five stops, including a solo stuff.

After an inconsistent effort in the opening set, SDSU had a chance to even the match in the second stanza thanks to a combined 17 kills from Labno (5), Rivera (4), Corf (4) and Tautua’a (3). However, Sac State benefited from eight Aztec attack errors and two wayward serves to escape.

Neither side managed a separation of greater than four points, as the set witnessed 10 ties and four lead changes. The Hornets ultimately reached set point at 24-22 following an errant SDSU attack. However, the Scarlet and Black flashed its resiliency with a Rivera kill, while Schraeder and Labno joined forces on a block.

Shortly thereafter, the Aztecs had two chances of their own to close out the frame, forging a 26-25 lead thanks to a Labno kill. But Sac State quickly fought itself off the proverbial ropes with three straight points on kills by Kamba-Griffin and Olin sandwiched around a Smith ace.

San Diego State continues its homestand on Thursday, Sept. 15, when it welcomes No. 22 UCLA to Aztec Court at Peterson Gym. First serve is set for 7 pm PT.