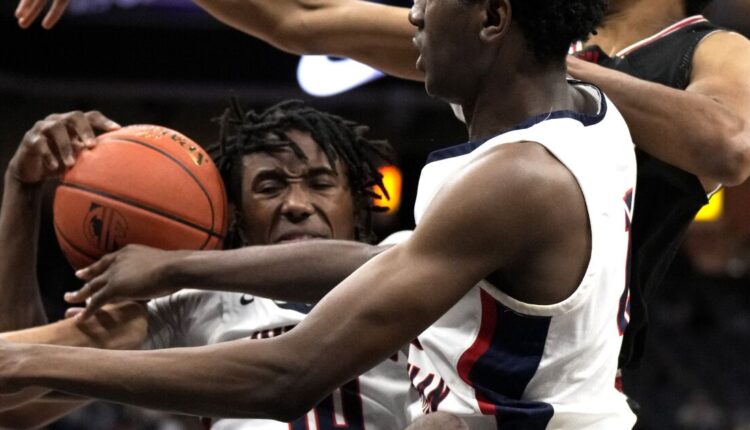 Chip on his shoulder: check.

BJ Davis, a 6-foot-2 guard from Modesto Christian High, orally committed to San Diego State at a school assembly Friday afternoon in what seems like the perfect fit for a men’s basketball program as interested in talent as intangibles.

“A lot of kids who blow up early and get a lot of attention, they stop working,” said Modesto Christian coach Brice Fantazia. “They think everything is going to be easy, everything is going to be handed to them. BJ never had anything handed to him. His parents are from Oakland, they’re grounded, they’re blue-collar people. BJ obviously has learned from them. It’s one of the best families I’ve ever coached, and one of the best kids I’ve ever coached.

“He doesn’t have an ego, he’s not entitled at all, he doesn’t care about any of that stuff. He just wants to be the best basketball player he can be. I can’t speak highly enough about him.”

In his history, Modesto Christian has twice had seasons where a player shot 50 percent from the field, 40 percent behind the 3-point arc and 90 percent at the line. Davis owns both, most notably a junior year where he averaged 17.0 points, 6.5 rebounds, 4.5 assists and 2.6 steals on a 30-6 team that lost in the Open Division state championship game to Corona Centennial.

But he has operated largely under the radar, being in Modesto and playing in the backcourt shadow of Jamar Phillips, a 6-3 junior who is ranked in the top 25 nationally for the class of 2024 and is being courted by the college basketball’s bluebloods. It wasn’t until a strong summer on the club circuit that people began to notice that, yeah, Davis can play, too.

247Sports quickly elevated him to a three-star prospect and no. 137 nationally.

“Everyone (in the recruiting services) is like, ‘He blew up so fast it’s hard to know where to put him in the rankings,’” Fantazia said. “As a freshman, he played JV and didn’t complain. He was all-state as a sophomore but that was a COVID year without fans and no one saw him. He just kept working, kept working, and this summer his athleticism kicked into another gear. He grew three inches. He just passed up a lot of kids along the way. His best basketball is ahead of him.

“I consider San Diego State to be a high major, and they were really the first high-major school to jump in and say, ‘I don’t care what these other people say. I see what I see. He can play for us.’ The thing about BJ is, he doesn’t care about any of that (recruiting rankings) stuff. He doesn’t care. You could put the no. 1 guard in the country in front of him, and BJ thinks he’s better.”

He visited SDSU over Labor Day and attended the inaugural football game at Snapdragon Stadium. He went to Saint Mary’s the following week, then canceled a trip to Washington State. Also in his list of nine finalists were Boise State, Wyoming, Colorado State, Mississippi, UC Santa Barbara and Drake.

“Committed,” Davis posted on social media shortly after the announcement at school. “100 percent.”

His commitment comes less than 24 hours after another SDSU target, 6-7 Harvard Westlake wing Brady Dunlap, picked Notre Dame. Dunlap was on the visit with Davis, but he grew up in the ACC when he was father was an assistant coach at North Carolina State and told On3.com that “being able to play in that league is a dream come true.”

The only other prospect from the class of 2023 to take an official visit to SDSU this month, 6-9 post Miles Heide from Mount Si High in Snoqualmie, Wash., is expected to announce a decision next week following a trip to Washington State.

SDSU appears to be taking a similar approach to high school recruiting as it did last season — being highly selective and identifying only three targets, then using the spring transfer market to fill any remaining holes.

A year ago, they got Elijah Saunders and Miles Byrd but lost out on guard Koran Johnson to Washington. Instead, they landed junior guard Darrion Trammell, who averaged 18.7 points in two seasons at Seattle, from the portal.

Davis, who was the only true guard SDSU had visit, fills a backcourt need with Matt Bradley and Adam Seiko both in their final year of eligibility. Trammell would have one year left, and Lamont Butler two.

Davis is more combo guard than natural point, able to score at all three levels with a quick release on his jumper and quick first step.

“But I’m guessing the first thing (SDSU) probably noticed about him is his defense,” Fantazia said. “He’s one of the very few guys who can score 30 and he’s still going to pick up the other team’s best player 94 feet. He loves to play defense. He’s extremely quick and is an excellent on-ball defender. He has great instincts. Defensively, Day 1 he’ll be ready to go.

“And he’s a gym rat. The No. 1 thing in his whole recruiting process was development. That’s all he cared about. Other schools offered him the opportunity to start right away, and there are no guarantees at San Diego State. Hey doesn’t care. He’s willing to go in and compete and work.”