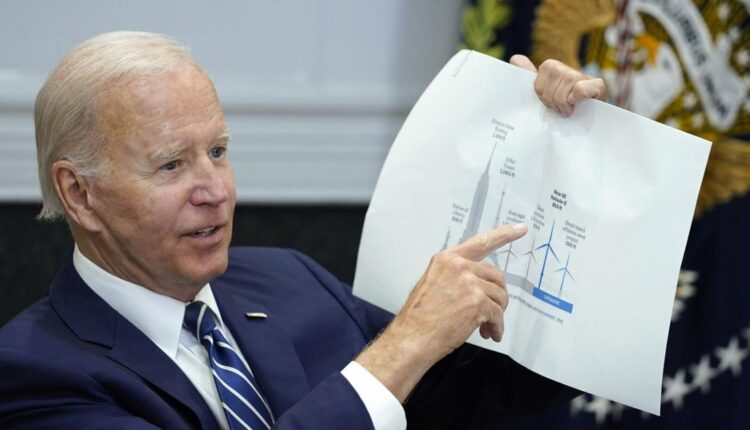 WASHINGTON (AP) — The Biden administration on Thursday announced plans to develop floating platforms in the deep ocean for wind towers that could power millions of homes and vastly expand offshore wind in the United States.

The plan would target sites in the Pacific Ocean off the California and Oregon coasts, as well as in the Atlantic in the Gulf of Maine.

President Joe Biden hopes to deploy up to 15 gigawatts of electricity through floating sites by 2035, enough to power 5 million homes. The administration has previously set a goal of 30 GW of offshore wind by 2030 using traditional technology that secures wind turbines to the ocean floor.

There are only a handful of floating offshore platforms in the world — all in Europe — but officials said the technology is developing and could soon establish the United States as a global leader in offshore wind.

The push for offshore wind is part of Biden’s effort to promote clean energy and address global warming. Biden has pledged to cut greenhouse gas emissions in half by 2030. A climate-and-tax bill he signed last month would spend about $375 billion over 10 years to boost electric vehicles, jump-start renewable energy such as solar and wind power and develop alternative energy sources like hydrogen.

“Today we’re launching efforts to seize a new opportunity — floating offshore wind — which will let us build in deep water areas where turbines can’t be secured directly to the sea floor, but where there are strong winds that we can now harness ,” White House climate adviser Gina McCarthy said at a news conference Thursday.

Deepwater areas in the Pacific especially have potential to vastly expand offshore wind energy in the US, McCarthy and other officials said.

McCarthy acknowledged that the floating technology is at an early stage. But she said “coordinated actions” by federal and state officials, working with the private sector, can position the US “to lead the world on floating offshore wind and bring offshore wind jobs to more parts of our country, including the West Coast.’ ‘

Two pilot projects are planned off the north and central California coast, and a third is planned in southern Oregon, officials said.

Oregon Gov. Kate Brown said her state and California have some of the best wind resources in the world, but called floating platforms crucial to develop them due to the depth of the ocean floor along the West Coast.

Heather Zichal, CEO of the American Clean Power Association, an industry group, called the announcement a “game changer” that will spark investment in a new domestic supply chain and allow the US to lead in this emerging technology. Along with incentives in the sweeping climate-and-tax bill, Zichal said she expects costs for offshore wind development to decrease dramatically, allowing deployment of clean energy at the scale needed to take action to address climate change.

“We think the private sector is going to quickly see the real opportunity here, not only to triple the country’s accessible offshore wind resources but to make the US a global leader in manufacturing and deploying offshore wind,” she said.

The world’s first floating wind farm has been operating off Scotland’s coast since 2017. Norway-based Equinor, which operates the 30-megawatt Hywind Scotland project, is currently building a huge, floating offshore wind farm off Norway to provide electricity for offshore oil and gas fields.

Lauren Shane, a spokeswoman for Equinor in the United States, said the company is upbeat about floating offshore wind and will evaluate possible opportunities in the US “We’re excited about the development of offshore wind in the US,” she said.

“The administration’s innovation priority is well-placed, and with the right investment and public-private partnerships,” floating platforms “can expand deployment, drive down costs and bring more clean energy to millions of Americans,” said Bryan Stockton, head of regulatory affairs for Ørsted North America.