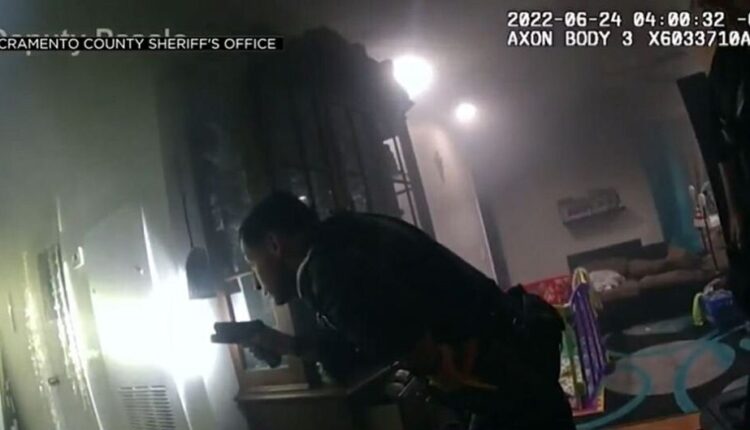 SACRAMENTO (KOVR) — The Sacramento County Sheriff’s Office has released body camera video of the hostage situation and fire along Madison Avenue from back in June.

Deputies say the incident, which started early in the morning on June 25, began after a woman and her estranged boyfriend got into a fight. At some point during the argument, the suspect allegedly went back into a bedroom – taking their two-year-old son with him.

It was at this point that the sheriff’s office alleges that the suspect held a large knife to the toddler’s throat.

As seen in the body camera video released on Tuesday, deputies entered the apartment and tried to de-escalate the situation.

However, the suspect instead allegedly lit the bedroom on fire with both him and the child inside.

Other surrounding apartments were evacuated. Just in time, first responders were able to get both the suspect and toddler and pull them out.

The video released on Tuesday also shows the scary moments after the boy was pulled out. Deputies say the boy wasn’t breathing—however, a short time later, the sheriff’s office says he spontaneously began breathing again.

Deputies say the boy suffered smoke inhalation, carbon monoxide, and burn injuries. He wasn’t released from the hospital until July 11.

The suspect was also irresponsible when he was first pulled out of the apartment. Deputies say he slowly became more alert – to the point that he then allegedly got combative.

The sheriff’s office says the suspect also suffered burn injuries as well as smoke inhalation. He was eventually discharged in July and has since been booked into Sacramento County Jail.