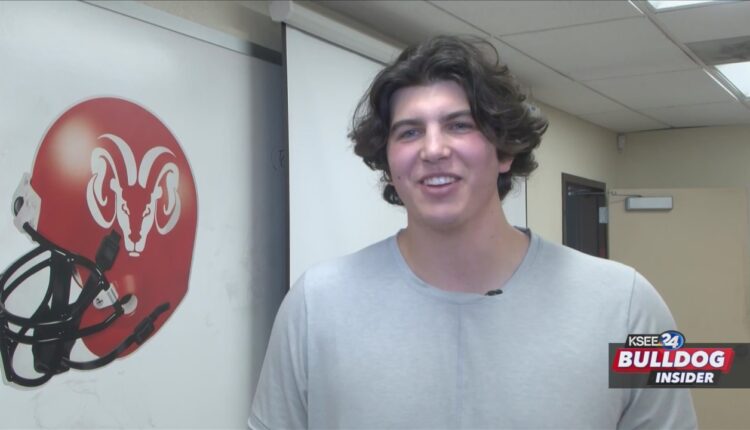 FRESNO, Calif. (KSEE) – Growing up in Hanford, Hayden Pulis played on youth football teams called, “Bulldogs.” He dreamed of one day being a Fresno State Bulldog.

“You grow up watching all these guys play, from Derek Carr and Davante Adams, who are just huge here in the valley,” said Pulis, a Hanford native and a defensive lineman at Fresno City College.

So the answer was simple when Jeff Tedford asked him a simple question after his official visit to Fresno State last weekend.

“It wasn’t even really, he told me he was gonna give me the scholarship as much as he said, ‘Do you wanna join the family?'” said Pulis earlier this week. “And I said, ‘yes.’ Automatically, yes.”

After graduating from Hanford High School in 2020, the idea of ​​getting a scholarship to play football at Fresno State was kind of in the rearview mirror for Pulis.

“‘Cause I hadn’t really gotten much looks out of high school,” he said. “And I thought maybe I just wasn’t meant to play football beyond the high school level.”

Pulis, a key left tackle on explosive Bullpup teams that captured back-to-back undefeated league titles during his junior and senior seasons, enrolled at Fresno State in the fall of 2020.

He was just a student.

That only lasted one semester.

“I just couldn’t do the normal student life,” smiled Pulis. “I need to do something a little more.”

‘Something more’ turned out to be an opportunity to play football at Fresno City College, where Hayden Pulis briefly flirted with a position switch.

“They actually lied to me and said I could play tight end to get me over here,” he laughed.

That also did not last long, as Pulis eventually went back to his high school position after making a great first impression.

“Yeah. Yeah, it was great seeing him, like first time seeing him,” said Wylie Brand, Fresno City College’s offensive line coach. “I was like, ‘alright, we’re gonna be alright at left tackle this year.’ So, it was awesome.”

Before this past season, Hayden Pulis was named a preseason third team all-American by JCGridiron. However, his sophomore campaign at City would end before it even got started.

He tore his right ACL in practice just a few days before the season opener. And this came a few years after he tore his left ACL as a sophomore in high school.

“’Why me’ is really the first thought that came to my mind,” said Pulis.

Added Brand, “If he had gotten to play this season, it would have been a game-changer. But I think it was good, silver lining.”

After coming to grips with the injury, Hayden Pulis attacked his rehab. He continued to work on making his upper body stronger, and he became an ‘extra coach’ of sorts, working alongside Wylie Brand.

“He showed up to all of our meetings, a bunch of practices and he was able to stay active, even though he was inactive,” said Brand.

Added Pulis, “you can’t really baby yourself when you’re in a position like that. You gotta pick yourself up by the boot straps and get back to work.”

That mentality helped him get back to Fresno State. This time, however, he will return to campus as a student-athlete.

“I might get a little emotional, I don’t know yet,” said Pulis of walking down the ramp at Valley Children’s Stadium. “But it kind of proves all the hard work is paying off when you get to walk down that tunnel.”

A Montana Addiction Clinic Wants to Motivate People With Rewards. Then Came a Medicaid Fraud Probe.