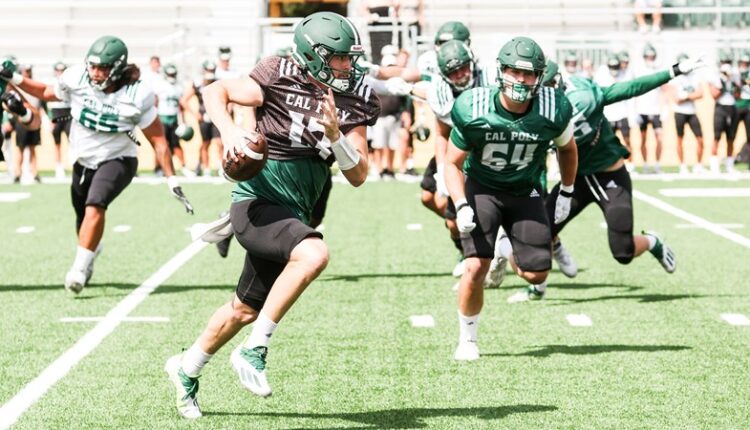 Kickoff for the non-conference game between Central California rivals is set for 7:35 pm PDT. The game will be broadcast live on ESPN?Radio (1280 AM and 101.7 FM) in San Luis Obispo County and northern Santa Barbara County and KRKC?(1490 AM and 104.9 FM)?in southern Monterey County with Zachary Anderson-Yoxsimer (play- by-play) and Stephan Hodges (analyst) calling the action. Pregame show starts at 7 pm The game also will be nationally televised on FS1 (Spectrum Channel 69 and 422 in San Luis Obispo County) with Eric Collins (play-by-play announcer for the Charlotte Hornets) and Devin Gardner (Michigan quarterback from 2010 -14) on the mic. Links for audio and video streams as well as live stats can be found on the football schedule page at www.GoPoly.com.

The first full season of Mustang football under Cal Poly head coach Beau Baldwin, which began 21 months after he was named Cal Poly’s 17th head football coach on Dec. 11, 2019, ended with a 2-9 mark. The Mustangs defeated San Diego 28-17 in the opener as Spencer Brasch, in his first game as a Mustang after transferring from Cal, completed 23 of 38 passes for 316 yards, the most by a Mustang quarterback in 12 years, and two touchdowns with no interceptions and Elijah Ponder returned an interception 75 yards for another score. Cal Poly also beat Idaho State 42-39 in the penultimate contest as Jaden Ohlsen kicked a 41-yard field goal with four seconds remaining and Brasch completed 25 of 50 passes for 233 yards and three touchdowns.

The offseason was highlighted with some firsts for Baldwin in his tenure at Cal Poly, namely seven uninterrupted months of conditioning from January through July, a Spring Camp that ended with a successful Spring Game, the hiring of five new assistant coaches to replace those who moved on to the NFL or FBS schools, and an explosive six-touchdown performance in the first of two Fall Camp scrimmages on the new FieldTurf inside Alex G. Spanos Stadium.

One of the coaches who left is James Montgomery, now running backs coach and recruiting coordinator for the Bulldogs. Another Fresno State assistant, offensive line coach and running game coordinator Saga Tuitele, coached the offensive line at Cal Poly from 2009-15. One of the new assistants at Cal Poly — running backs coach Robbie Rouse — was a running back at Fresno State from 2009-12, rushing for a total of 4,647 yards and 37 rushing touchdowns while also finishing with 794 receiving yards and five receiving touchdowns. He is the first player in program history to record three 1,000-yard seasons and helped the Bulldogs reach a bowl game in three of the four seasons. Will Plemons, currently Cal Poly’s defensive line coach, coached the same group at Fresno State during three coaching stints — 2004-05 and 2008-11 under Pat Hill and 2019 under Jeff Tedford.

Fresno State is coming off a 10-3 campaign in 2021 which included a 6-2 Mountain West mark for second place in the West Division and a 31-24 victory over UTEP?in the New Mexico Bowl at Albuquerque, NM Kalen DeBoer left the Bulldogs as head coach after the regular season ended to become head coach at Washington and Tedford was hired nine days later to coach the Fresno State program for the second time. Tedford coached the Bulldogs from 2017-19, inheriting a team that had gone 1-11 and turned it around to back-to-back double-digit wins — 10-4 in 2017 and 12-2 in 2018. Several Bulldog players on the 2022 roster have seen a full rotation of three coaching staffs in their six years of collegiate football.

Haener passed for 4,089 yards and 33 touchdowns in 2021, completing 17 of 22 passes for 380 yards and four touchdowns against Cal Poly. He was selected as the 2022 preseason Mountain West Conference Offensive Player of the Year. Cropper played in all 13 games with 10 starts and made 85 receptions for 899 yards and 11 touchdowns, which led the offense in all categories. He was named to the Biletnikoff Award watch list this summer.

Perales is coming off a season with 45 total tackles, 13.5 tackles for a loss, seven sacks, three forced fumbles and three QB hurries in 12 starts on his way to a second-team All-Mountain West selection. Over the last two seasons Perales has recorded 22.5 tackles for a loss and 11 sacks. Mims returns for a sixth season, playing in all 13 games with two starts on his way to 710 yards and six TDs rushing along with 25 catches for 324 yards and four scores. Williams recorded a team-high 94 total tackles, 4.5 tackles for a loss and three interceptions in 2021 and was a first-team all-conference pick.

Fresno State has won 28 conference titles in 100 seasons of football with 30 bowl appearances, winning 15. Fresno State is 628-439-27 overall, including a 187-61-2 mark at Valley Children’s Stadium. There have been 33 crowds of 40,000 or more at Valley Children’s Stadium, which opened in 1980 and was named Jim?Sweeney Field at Bulldog Stadium until this year. A total of 117 Bulldogs have earned All-America honors, including 18 on the first team.

Fresno State leads Cal Poly 33-10-2 in the all-time series which began in 1922. The Bulldogs have won the last eight meetings, including a 63-10 decision last fall and a 41-25 verdict in 2013. In 2021, Fresno State led 35-3 shortly before halftime and never looked back. In the game nine years ago, the Mustangs turned a 41-3 third-quarter deficit into a two-possession game with three touchdowns in the second half, but could get no closer. Seven of Cal Poly’s 10 wins against Fresno State occurred from 1969-79 when Joe Harper was head coach.

Baldwin is coaching against Fresno State for the second time while Tedford is facing Cal Poly for the first time as a head coach.

Baldwin was head coach at Eastern Washington for nine seasons (2008-16) and was an assistant coach for the Eagles from 2003-06. An offensive coordinator at Cal for three years (2017-19) before coming to Cal Poly, Baldwin guided Eastern Washington to an 85-32 mark, five Big Sky titles and six FCS playoff berths, including the 2010 national championship.

Cal Poly fans have seen major changes, particularly on offense, with Baldwin at the helm. The Triple Option is gone and the new offensive package features three or four wide receivers on most plays with one running back instead of two slots, a fullback and a pair of receivers in the old Triple Option formation.

Also on the 108-man fall roster are 22 players who were true freshmen and played in at least one game but no more than four, preserving their redshirt year, five transfers from four-year schools, two community college transfers, 13 redshirts or squad members who did not play at all in 2021 and 28 newcomers from the high school ranks.

Cal Poly played the fifth-toughest schedule in the NCAA’s Division I Football Championship Subdivision last fall and faces 10 of the 11 teams again this season, replacing Weber State with Eastern Washington.

The 11 opponents on the Mustangs’ 2021 schedule compiled an 80-52 win-loss record for a .606 winning percentage. Five of them — South Dakota, Montana, Montana State, UC Davis and Sacramento State — qualified for the FCS playoffs and Fresno State played in a bowl game.

Weber State, which won or shared four straight Big Sky titles heading into the 2021 season, didn’t make the postseason but was one of seven Cal Poly opponents ranked at one time or another in 2021. San Diego finished 7-4 with a share of the Pioneer League crown, its 10th in the last 11 years.

Cal Poly tackled that schedule with as many as 10 freshmen and seven sophomores in the starting lineup last fall.

“We’re an ascending program that will be better next year,” Baldwin said shortly after the 2021 season ended. “Every program goes through its ups and downs. It’s always a work in progress.

“I am excited for the future of this program and especially the younger players,” Baldwin added. “There were a number of young guys who got the chance to play. When you take over a program and change the system, you usually become a young team, the players adapting to your program and system, always going through growing pains, and we definitely had a lot of that.”

In addition to this year’s game at Fresno State and the 2014 contest at New Mexico State, Cal Poly’s only other season-opening Thursday games were at Toledo in 2002 on Aug. 29 and at Northern Arizona on Sept. 9 in 1999. The Mustangs also played Thanksgiving Day games against Cal Poly Pomona in the 1960s.