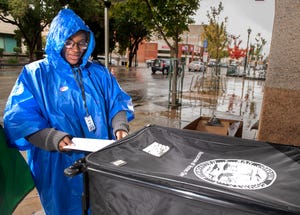 A tornado touched down just off Highway 99 near Galt during Tuesday’s storms, the National Weather Service said, downing power lines and tearing a tin roof from a barn.

The small tornado, reported at 1:40 pm, also blew the windows of a bus out when it blew through at about 70 mph near Highway 99 and Arno Road near Galt, about 25 miles north of Stockton, the NWS said, and left a trail about an eighth of a mile wide across some 400 yards. It was categorized by the weather service as an EF-O, meaning it had wind speeds less than 73 mph, the weakest tornado on the enhanced Fujita scale.

“I just saw this north of Galt. It appeared and was gone in about a minute,” one person tweeted.

The tornado struck amid a wet Election Day storm that sparked some power outages in areas of Stockton, affecting fewer than 500 customers.

Elsewhere, a drenched California emerged Wednesday from a powerful multiday storm that unleashed rain, snow and raging floodwaters, leaving one person dead and two others missing.

Lingering showers, mountain snow and gusty winds were tapering off, and the National Weather Service issued overnight frost and freeze advisories due to the cold airmass behind the storm.

The tempest unleashed heavy downpours Tuesday in Southern California, where one person was found dead after runoff surging down a creek channel swept six people away in the city of Ontario. Three were rescued by firefighters but two others remained missing.

The storm continued to affect travel Wednesday on highways through the Sierra Nevada after heavy snow and whiteout conditions. Chain controls remained in effect and big rigs were restricted altogether on some sections of routes through the towering mountain range.

The potent fall storms are a promising start to California’s wet season, although experts say it will take much more precipitation to reverse the impacts of the state’s historic drought.

UC Berkeley’s Central Sierra Snow Lab reported that this week’s storm dropped 34.3 inches of snow by Wednesday, and that the eight-day total was 54 inches.

Among Lake Tahoe snow sport resorts, Mt. Rose and Boreal announced plans to open for the season on Friday. The Eastern Sierra resort of Mammoth Mountain, which opened last weekend, reported totals from the departing storm ranged from 49-70 inches. Annual snowfall in the Sierra normally provides about a third of the state’s water when it melts. Last year, however, California had powerful storms in October and December but experienced its driest January through April on record.