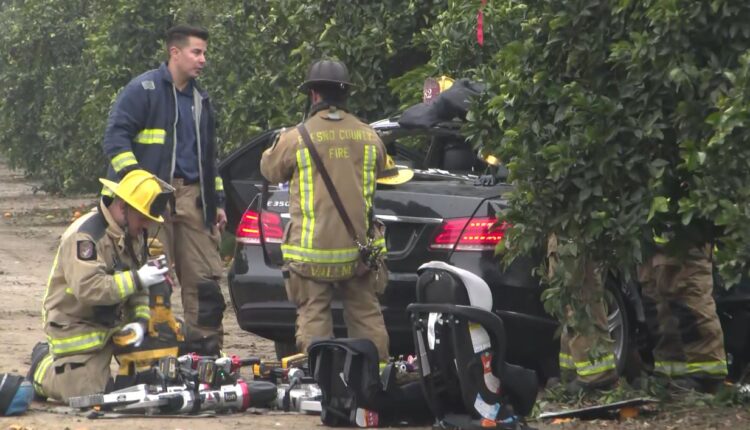 Fresno County, Calif. (KSEE/KGPE) – One woman was killed, and three adults, four children sustained injuries ranging from major to critical after a two-vehicle collision in Fresno County on Wednesday morning, according to the California Highway Patrol.

CHP officers say that at about 10:00 am the CHP responded to a major injury collision on Jefferson Avenue and Clovis Avenue. An initial investigation showed that a Chevy Malibu with only one driver was traveling southbound on Clovis Avenue. For reasons yet to be determined, a Mercedes Benz with three adults and four children inside was either on Clovis Avenue traveling northbound or made a u-turn in front of the Malibu, or was on Jefferson Avenue and came directly across in the path of the Malibu.

According to officers, the Malibu collided broadside on the right side of the Mercedes. The collision involved major to critical injuries to everyone in the vehicles and one adult female was confirmed deceased on the scene. Two of the children in the Mercedes are currently in extremely critical condition, while the two others suffered major injuries and have been taken to a local hospital. They ranged from ages two to four years old.

The Fresno County Fire Department was on the scene to assist two trapped adults in the Mercedes that required the “Jaws of Life”, they are also in critical condition according to CHP. The rest of the adults involved suffered major injuries, including the driver of the Malibu.

CHP says that drugs and alcohol were not a factor in this incident, but an error by the driver of the Mercedes, which was overloaded by two people and missing two car seats for two of the children. They are unsure if the children were either on the laps of the adults or on the seats which could have played a major factor.

Officers say that while fog was not a factor in the incident. It played a role in the transportation of the victims as helicopters could not be called in due to the fog to airlift the victims.

The California Highway Patrol says they cannot stress enough how important it is for every person in a vehicle to have their seatbelt and if necessary a car seat. Also, make sure to have your lights on during foggy conditions to help visibility.

Her Credit Was Ruined by Medical Debt. She’s Been Turned Away From Doctors, Jobs, and Loans