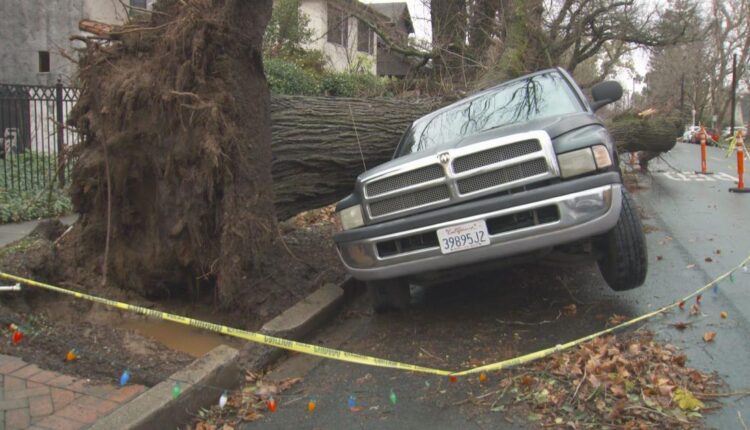 SACRAMENTO (CBS13) – A tree on 24th Street on top of two cars; another tree on two homes in Land Park; another on the levee in River Park, cut back by neighbors. Scenes throughout Sacramento on Monday signal the storm that moved through the region over the weekend, and the damages that homeowners are working to clean up.

At least 100 feet long, the tree on 24th between 4th and 5th Streets in Curtis Park in Sacramento has been removed from the street for cars to pass. Around the scene, neighbors took caution tape, orange cones, and Christmas lights out to signal to drivers and other neighbors to slow down and be careful.

The driver of one of the trucks stuck under the weight of the decades-old tree said he’s been moved by the comradery of neighbors.

“It was actually kind of a joyous occasion, everybody working together so we could open the street,” said Jeff Moore, who told CBS13 the addition of the Christmas lights around his vehicle to keep others safe was a surprising and welcomed touch by neighbors.

Moore said he has a second vehicle and is able to get around. He said he understands the City of Sacramento is inundated with calls and understands, with the tree out of the road, it may not take priority with another storm set to move through the region Tuesday.

A few miles away, a Land Park homeowner celebrated his ten-year anniversary of being a homeowner in the very house he stood outside of Monday staring up at a 65,000 pound tree on his roof.

City of Trees looks like City of Fallen Trees after #winds #CAwx over the weekend. #Sacramento has so many beautiful trees + saturated grounds, high winds, this is what you get in some areas. #california #downedtrees #tree #storm #weather #caweather

“I think it’s supposed to be aluminum not wood,” said Eben Burgoon, the Land Park homeowner finding humor in the shock as he joked about traditional 10-year anniversary gift.

Burgoon said he went outside Sunday late when winds were moving through the area. He stepped back inside to “assess the flashlight needs” when he heard a “thud, thud, thud” outside the home.

A tree, at least 100 feet long, fell from his neighbor’s front yard onto their home and then, onto Burgoon’s roof and into the fence and street next to his home. Inside his neighbor’s home, the tree fell through the attic and into a room where they slept, nearly missing them, Burgoon said.

The neighbor’s front-door was mostly blocked by the stump of the tree and the upstairs where the tree landed is exposed to rain, the homeowner said. Once the tree is removed, both families can assess the damage on the homes and begin to rebuild.