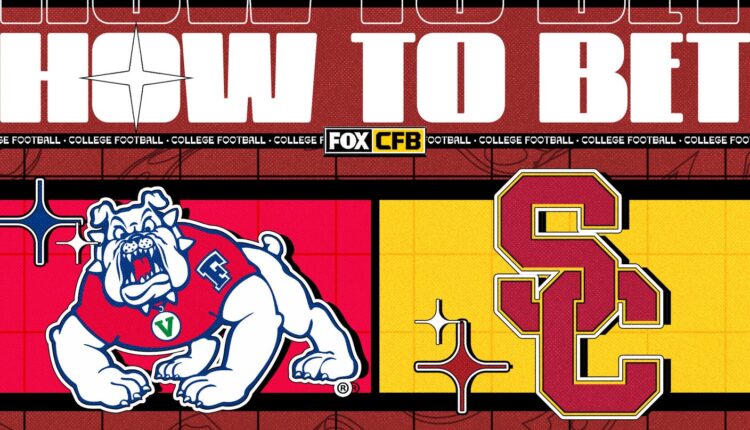 An out-of-conference matchup between two of California’s best teams is just one of the many highlights of the Week 3 college football slate as Fresno State travels south to take on the USC Trojans.

USC’s offense has been everything Trojan fans have hoped for so far following the hiring of Lincoln Riley and the addition of quarterback Caleb Williams. USC scored 66 points in a blowout win in its season-opener against Rice before scoring 41 points in its Pac-12 opener against Stanford on Saturday to win its first conference game.

Here’s everything you need from a betting perspective on the Fresno State-USC game, from the point spread, moneyline, total over/under and pick by out betting expert (odds via FOX Bet):

The Bulldogs were 8-5 against the spread (ATS) last season.

The Bulldogs were 1-0 ATS as underdogs of 12.5 or more points last season.

The Bulldogs hit the over in the over/under (O/U) six times in 13 games last season.

The Trojans were 4-7 ATS last season.

The Trojans were 1-2 ATS when favored by 12.5 or more points last season.

The Trojans hit the over in six of 11 games last season.

The Trojans lead the all-time series 4-1, with the Bulldogs winning the first game between the teams 24-7 in 1992.

USC is exactly the team I expected them to be. They are a dynamic group, especially in the first half of games. Quarterback Caleb Williams has completed 79.6% of his passes for 590 yards. Transfer receiver Jordan Addison has 12 receptions for 226 yards and fellow receiver Mario Williams, a former Oklahoma player, has added 117 yards through the air. This is everything you would expect from this offense.

On defense, USC has relied on forcing turnovers to mask the smell of the stinky defensive unit that the Trojans have put on the field. USC has forced eight turnovers in the 22 opponent drives they’ve defended. That is not a pace they can sustain throughout the season and it should concern USC fans.

They are 119th in rushing success rate, 88th in overall success rate, 109th in yards per possession, 76th in points per scoring opportunity (which includes the eight times a drive has ended in a turnover). USC’s poor defense is nothing unexpected, though, so while this appears bad — and it is — I can square with it.

Fresno State does not have the talent to match USC but they always play the Trojans well. This is their Super Bowl. Every kid playing in this game at some point hoped that USC would have recruited them. The Bulldogs are coached by Jeff Tedford. He struggled to beat USC while at Cal but always seemed to be knocking on the door of success. Fresno’s quarterback is savvy veteran Jake Haener. He led the Bulldogs into the Rose Bowl for an upset of UCLA last season. Haener has thrown for nearly 800 yards in the first two Bulldog games. Fresno’s defense is going to struggle to stop USC so I’ll be counting on the offense to help keep pace

The thing that concerns me the most about Fresno to cover this game is Tedford’s conservativeness in big moments of games. He can’t do the “right” thing. He must stay aggressive.

Are you ready for some college football? If so, head over to FOX Bet for all your wagers.

Download the FOX Super 6 app for your chance to win thousands of dollars on the biggest sporting events each and every week! Just make your picks and you could win the grand prize. Download and play today!

Get more from college football Follow your favorites to get information about games, news and more.