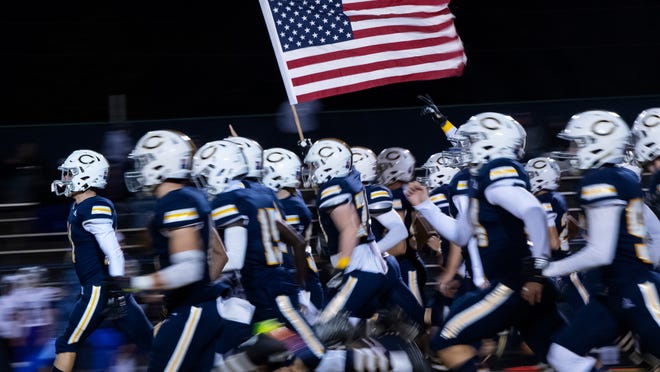 EVANSVILLE — Two Southern Indiana Athletic Conference teams will have a home-field advantage as they compete for semistate championships on Friday night.

Castle will host Whiteland in Class 5A while Mater Dei will square off with Linton-Stockton in 2A. The Wildcats reached the state finals at Lucas Oil Stadium last season; the Knights last advanced to state in 1994. Will either punch their tickets to Indianapolis on Friday night?

Our season championship on staff appears to be secured. Kyle Sokeland has a three-game lead in the standings, though everyone has at least a 75% success rate on the season in what became a competitive race down the stretch. Here’s a look, with last week’s results in parenthesis:

Kyle Sokeland: Let’s give credit where it’s due. Castle couldn’t break through in the regular season but played its best game last week against Bloomington. Not many expected it. Perhaps the momentum continues and I’m proven wrong again. It will be strength on strength with Whiteland’s unique running game against John Purdy and the defense. Whiteland 30, Castle 17.

Treasure Washington: Brayden Bishop had just three completions against Bloomington South, but his biggest one kept Castle’s season alive. The main focus now for the Knights is finding a way to pull out another upset on Whiteland. I’m not high on the Knights beating the Warriors, but I do expect for this to be another competitive game. Whiteland 28, Castle 21.

Hendrix Magley: This has been a strong postseason run for Castle. I’ll be honest, I didn’t expect them to knock off Bloomington South. But the Knights have been strong at home. Can they make it three straight to keep their Lucas Oil Stadium dreams alive? At this point, I’m a believer. Castle 24, Whiteland 21.

Anthony Kristensen: I was impressed by Castle’s performance against Bloomington South. The Knights played great defense throughout the game and came up with timely plays to pull the upset. I’m intrigued to see how they do this time around, but I think Whiteland is too strong this season. Whiteland 24, Castle 20.

KS: Linton may have the team to finally beat Mater Dei after FOUR straight years of losing to the Wildcats. But once again, Mater Dei is peaking in the tournament. Mason Wunderlich had the touchdowns, but I was impressed with his run game against Triton Central. The Wildcats need to bring their ‘A’ game on defense to win. Mater Dei 31, Linton-Stockton 24.

TW: The biggest strength of this Linton-Stockton team is its offense, and Hunter Gennicks and his 48 total touchdowns is a nightmare to stop. But Mater Dei has won four straight games against the Miners and have ended their undefeated season before. I like the Wildcats’ chances of doing it again. Mater Dei 35, Linton-Stockton 34.

HM: Isn’t it funny that a matchup that used to practically decide a sectional championship now determines who will represent the South in Class 2A at state? But enough about those wacky sectional realignments. At this point, it’s become expected that Mater Dei makes a run in the postseason. They always seem to. But the miners are good. This will be a thriller. I’m not betting against Mike Goebel at the Bowl. Mater Dei 31, Linton-Stockton 24.

AK: Mater Dei has been impressive throughout the postseason. Last week’s win against Triton Central was the best showing of that so far. Linton-Stockton has had trouble stopping the Wildcats in the past, so I give the hosts the slight edge. Mater Dei 30, Linton-Stockton 27.