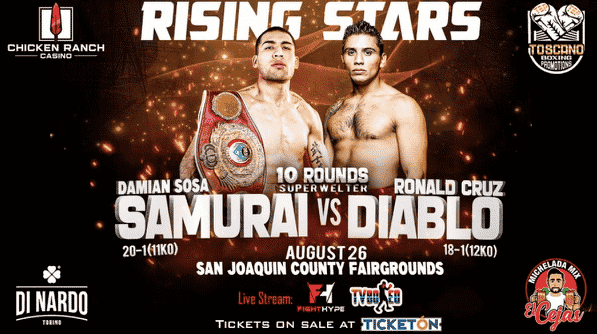 Looks like a solid matchup will unfold on August 26 in Stockton, CA. 154-pound Mexican contender Damian “Samurai” Sosa (20-1, 11 KOs) is set to battle Ronald “Diablo” Cruz (18-1-1, 12 KOs) in a 10-round main event on a Friday night at San Joaquin County Fairgrounds in California’s Central Valley.

The card as a whole will be streamed live in English on FightHype and in Spanish via TV Boxeo.

“We’re excited to be coming back to Stockton, California for another action-packed show featuring our rising star Damian Sosa,” said Jorge Toscano, CEO and Founder of Toscano Boxing Promotions, in a press release. “He’s a strong fighter with an aggressive style, but Ronald Cruz poses a big threat to him. We’ll see what both fighters are made of on August 26, and it will be a fun fight while it lasts.”

Here is more info on the main events, from the release:

He fought in his native country for most of his career before challenging Artem Oganesyan for the WBO Youth Junior Middleweight Championship on enemy territory. Despite losing, Sosa put on a tremendous effort and bounced back with victories against the likes of “Cassius” Clay Collard and Jesus Vega. Sosa, who lives and trains in Tijuana, looks to continue making his case for a world title at 154 pounds.

“I’m very happy to know that I’ll be fighting again in Stockton, California, once again,” said Damian Sosa. “Last year I had my first fight in the United States, and it was right there in Stockton. So, I’m very motivated and more so because it’ll be against an American fighter with a very good record. For me, our records make this an attractive fight. On the other hand, I also know that he’s very strong fighter who likes to come forward, and those are ingredients that make for an exciting fight. Without a doubt, it will be a war.”

Cruz is a 30-year-old native of Los Angeles, California who debuted as a pro in September 2014.

He had a rocky start to his career by suffering his first defeat in his third fight, but he then remained undefeated across 16 additional fights through seven years of action. In his last outing, Cruz fought to draw against Kevin Ottley, but feels that he will be ready to deliver the best performance of his life against Sosa.

“I look forward to fighting against Damian Sosa this coming August 26,” said Ronald Cruz. “The judges can take a break in this fight because we won’t be needing them. There will be lots of fireworks, and you won’t want to miss this.”

Undercard information will be announced shortly.

Tickets for Sosa vs. Cruz are on sale now and start at $45, excluding applicable services charges. Tickets are available for purchase at Ticketon.com or by clicking here.