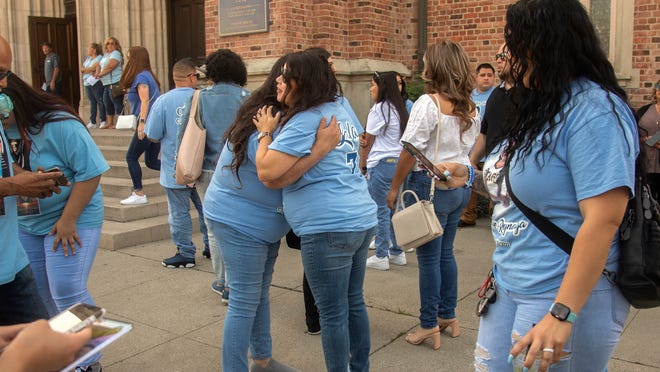 A city is defined by its people, and many have left their mark on Stockton over the years. Several influential Stocktonians passed away in 2022, but their local legacies live on.

Some are remembered for their achievements in life — a name cemented on the crosstown freeway, a collection of hundreds of thousands of Valentine’s Day cards, foundations left in their stead or stories of their relentless work ethic, activism or kindness.

Others were taken before their life’s work was finished — or had barely begun. The slayings of a local high school freshman and a fire captain brought the Stockton community together in mourning, remembrance and reflection.

Stockton lost 15-year-old Stagg High School freshman Alycia Reynaga April 18 when she was killed on campus by a trespasser.

Some 750 Stocktonians came to Cathedral of the Annunciation to celebrate Reynaga’s life and lay her to rest.

A water advocate for over three decades and a defender of Delta fisheries, Bill Jennings, 79, passed away Dec. 27

Jennings was a co-founder of local nonprofit Restore the Delta and served as executive director at California Sportfishing Protection Alliance. In January Jennings was inducted into the California Outdoors Hall of Fame.

“His activism and legacy will leave a lasting impact on water policy and projects in our region for many years to come,” Winn said in a statement. “He will truly be missed.”

A retired US Marine and recipient of over 300,000 Valentine’s Day Cards, Bill White died in March at age 106.

White was thinking to be the oldest living Marine before his death. He received the Purple Heart for sustained injuries during the Battle of Iwo Jima in 1945 and later served during the Korean War.

White started Operation Valentine in 2020 with the goal of receiving 10,000 Valentine’s Day cards for his memorabilia collection. He received 14,000 in a single day and ended up with over 300,000.

“I wasn’t expecting anything like this,” he told USA Today. “It hit me like a ton of bricks. I still can’t get over it.”

Agricultural leader, 2005 Stocktonian of the Year and “giant of a man,” Dean “Dino” Cortopassi died in February at age 84 after complications from a stroke.

“He did so much for this community in so many areas — education, agriculture, protecting the water of the Delta area,” former Greater Stockton Chamber of Commerce CEO Doug Wilhoit said in February.

“He was a go-getter, I mean he was aggressive in the sense that he wanted to be successful and he wanted to win,” said Rob DeWitt, Marcopulos’ successor as head coach of Delta College men’s basketball. “Our relationship was good and Ernie was very loyal and he would have your back on things.”

As Delta College’s athletic director from 1974 to 1996, Marcopulos was a strong proponent for Title IX and created equal opportunities for young women interested in intercollegiate athletics. An administrator ahead of his time, he implemented 11 women’s sports at the college in 1979.

Nearly four decades ago, the businessman and philanthropist led the Stockton-based State Savings and Loan through its transformation into the largest savings and loan in the United States.

“We had 6,000 employees at (the savings and loan), and I think everybody there knew Foster and absolutely loved him,” Sheri Reiman-Estes, a former colleague of Fluetsch said. “I can’t imagine the world without him.”

American Savings and Loan was once Stockton’s largest private employer in the 1980’s with 1,800 employees.

Fortuna’s death shocked the community, and his memorial service overflowed with love for the fallen firefighter. Those who gathered told stories of a man whose life was devoted to three pillars: faith, family and being a fireman.

“Today we honor a leader, a hero and a man who was deeply loved,” Stockton Mayor Kevin Lincoln said at Fortuna’s Feb. 6 memorial service. “That is how Capt. Max Fortuna will always be remembered.”

Robert Somerville, the man charged in Fortuna’s death, could face a jury trial as early as Jan. 10, 2023.

His eldest daughter, Brenda Pozzo, said Calosso had a tough exterior, but on the inside he was “a big teddy bear.”

When M. Calosso & Son’s building on Miner Avenue caught fire on the Fourth of July in 2013, the company’s suppliers rushed to replace damaged materials within a day — a testament to Calosso’s rock-solid business relationships, Calosso’s son-in-law, Jeff King, said.

A coach for over 35 years at Stockton staples like St. Mary’s High school, the Boys & Girls Club, Spanos Duck Teams, Big Valley Water Polo and San Joaquin Delta College, Leabo was commemorated April 28 with the renaming of its pool.

“He was just very positive, he was always encouraging his athletes,” Nathan Varosh, one of Leabo’s athletes, said in April. “He had a great knowledge of the game and just a really amazing skill set to connect with kids and teach them the game.”

Henry spent decades as an educator, counselor, mentor and cherished neighbor. She moved to Stockton from South Carolina in the 1940s, and her dedication, impact and love for the community made her a Stocktonian.

“Love is the answer,” was her popular motto throughout her career and life’s work. She praised her students, applauded their success and established positive family-like relationships with them.

“That’s the only thing that works,” Henry said. “Negative comments do nothing but destroy — adults and children.”