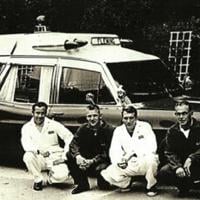 By Susan Armburger and Mark Roche

COCHRANTON — A group of 30 people met at the Cochranton Municipal Building on April 25, 1972, to discuss the possibility of the community providing an emergency ambulance service. The decision would result in one of the biggest volunteer efforts in the community’s history.

The meeting was the result of a proposal presented to the Cochranton Volunteer Fire Department by David Stockton concerning the possibility of the department purchasing the Fleming Ambulance Service. Stockton was discontinuing the service in June (1972) and offered the equipment, valued at $7,800, to the fire department for $6,500. He further agreed to help train the personnel that would be needed to operate the 24-hour, seven-day-a-week service. After a long discussion, the department decided that a public meeting was in order to explore the sentiment and commitment of the community.

The meeting included representatives from the local service organizations. Among the groups represented were the fire department, Jaycees, Business and Professional Women’s Association, Cochranton Grange, school Parent-Teacher Association, Rotary Club, American Legion post, Lions Club and a Fairfield Township supervisor. The meeting, conducted by Cochranton Fire Chief Harry Wood, centered on the community commitment needed to fund and operate the service. Cochranton Police Chief Grover Heffernan reported that in the past three years, there had been 72 accidents with 19 people requiring ambulance transport for life-threatening injuries. Dave Stockton reported that the Fleming Service averaged 125 calls per year. The group decided to reach out to the Utica and Townville volunteer ambulance services to gain further information before agreeing to proceed.

Representatives also reached out to local businesses to determine whether employees would be able to leave work to answer calls. Interested individuals were asked to contact Chief Wood to determine the level of participation to be expected by community members.

At a follow-up meeting at the fire department on May 8, Wood reported that state Rep. R. Budd Dwyer and Congressman Joseph Vigoritto’s offices were exploring state and federal aid. Reports were given on the operations of the Utica and Townville services, along with a commitment by several of Cochranton’s larger employers to allow personnel to leave work to answer calls. The fire department decided to mail out a questionnaire to all persons in the Cochranton Post Office service area to survey their interest. The deadline for responses was set for May 22. A special meeting was called for May 24 to make a decision. After weighing the pros and cons, Reggie Smith moved that the fire department purchase the 1968 Pontiac Ambulance from Dave Stockton for $6,500. The motion was seconded by Don Bauer and received overwhelming support. Stockton was appointed to contact the American Red Cross in regard to holding classes. Fire Department President Charles Papinchak appointed a steering committee to get operations organized which included Stockton, Jack Heffernan, Bauer, Dale Shreve and Chuck Derby.

The first ambulance service meeting was held on June 5. First aid classes were held on Monday and Tuesday evenings with nearly 40 individuals taking classes from Dave and Glenn Stockton. With the assistance of the Cochranton First National Bank and Kightlinger’s Chevrolet, the balance due on the ambulance was paid off in August. The membership had risen to over 500. Regular monthly practices were held to continue the training of the volunteers. In September, the service received a check from the July 4 Celebration Committee for $1,000. This was the first community July 4 celebration that would become an annual tradition of the community during the 1970s and early ’80s.

A new challenge was embarked upon by the fire department in November. The department formed a committee to begin the process of building a new fire hall. The original building, in use since 1939, was unable to accommodate all the department’s equipment due to the addition of the ambulance. The new building was dedicated in 1974.

In 1973, 20 members of the department took standard and advanced first aid training in preparation for the Emergency Medical Technician Program (EMT) to be offered by Meadville City Hospital. The training consisted of 90 hours of clinical and practical training. In January of 1974, the first class of EMTs in Crawford County received certification. Cochranton had 20 members of the class of 27.

A Chevy van ambulance was added to the service in 1974; the first year the service ran 180 calls with the volume increasing to near 400 in the subsequent years. By 1983, the company had 35 advanced first aiders and EMTs and continued to add equipment.

Six years ago, due to a decline in qualified personnel, the department was forced to downsize to a Basic Life Support service. Under these guidelines the service no longer can transport patients.

Of the original group of EMTs, Earl Mook remains the only active participant with the department. Mook maintains his certification and continues to respond to emergency calls. His resilience over the past 50 years is a testament to his dedication. For him it is a personal ministry in supporting the physical and mental well-being of his community.

It is impossible to calculate the impact the ambulance service has had on the community in the past half-century, but it reveals the heart and soul of a caring generation of community volunteers.

Burned Out by Covid and 80-Hour Workweeks, Resident Physicians Unionize