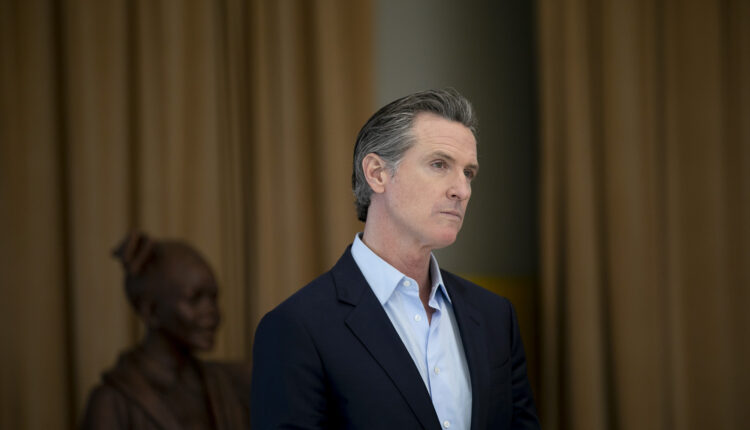 Gov. Gavin Newsom has a big decision to make — one that could have equally big implications for his national profile.

Heading to Newsom’s desk is a controversial bill that would allow Oakland, San Francisco and Los Angeles to launch trial supervised drug injection sites through Jan. 1, 2028. The sites — which are currently not authorized under federal law — would permit Californians to use illegal drugs under the supervision of medical professionals, who would supply them with clean needles, connect them with substance abuse services if requested, and administer overdose reversal medications if needed.

As Newsom elevates his political profile by contrasting California with Republican-led states such as Texas and Florida — a strategy that suggests he may be building the foundation for a future presidential run — he’s no doubt aware that greenlighting the safe injection sites would give his GOP critics plenty of fodder for attack ads.

“This is one of the most dangerous pieces of legislation that I’ve seen sent to the governor,” state Senate Republican Leader Scott Wilk said in an Aug. 1 statement. “Instead of focusing on a strategy to help people get their lives back, get off drugs and into treatment, California Democrats focus on giving people free needles and a safe place to shoot up.”

But pressure is also mounting on the governor to sign the bill. On Wednesday, the Los Angeles Times and Sacramento Bee editorial boards and San Francisco Chronicle columnist Heather Knight urged Newsom to approve it, citing a massive surge in fatal overdoses — many of them caused by the powerful synthetic opioid fentanyl — that killed a record 10,000 Californians in the year-long period ending April 2021.

(Also Wednesday, a federal judge ruled that Walgreens can be held liable for causing much of San Francisco’s opioid epidemic, noting it distributed more than 100 million prescription pills to the city’s pharmacies between 2006 and 2020 without taking reasonable steps to curb their misuse.)

If Newsom were to sign the bill, it would reverse the decision of his predecessor, fellow Democrat Jerry Brown, who vetoed a similar bill in 2018. “Fundamentally, I don’t believe that enabling illegal drug use in government-sponsored injection centers — with no corresponding requirement that the user undergo treatment — will reduce drug addiction,” Brown said at the time.

But rejecting the bill would also be a repudiation of California’s values and vision, lawmakers and advocates argued at a Wednesday press conference.

Politics aside, how exactly do supervised injection sites work, when would they be open, how would they be funded, and what does research show about their effectiveness? CalMatters health reporter Ana B. Ibarra has the details.

California has administered 78,998,017 vaccine doses, and 71.8% of eligible Californians are fully vaccinated.

Other Stories You Should Know

Patricia Guerrero, second from right, before she was sworn into the California Supreme Court by Gov. Gavin Newsom at the Stanford Mansion in Sacramento on March 28, 2022. Photo by Nathaniel Levine/The Sacramento Bee via AP, Pool

Patricia Guerrero, who was confirmed as the newest member of the California Supreme Court in March after Newsom nominated her the month before, is poised to assume its most senior role after Newsom on Wednesday selected her as the court’s next chief justice. Guerrero — if confirmed by the Commission on Judicial Appointments and by California voters in the November general election for a 12-year term — will replace current Chief Justice Tani Cantil-Sakauye, who announced last month she plans to retire when her term ends on Jan. 1, 2023. By elevating Guerrero to the court’s top position over more senior justices appointed by past governors, Newsom could be seen as intent on cementing his influence over the state’s highest court. Guerrero would also be the first Latina to lead the state Supreme Court, CalMatters’ Nigel Duara reports. California has a glaring gap of Latino judges on court benches across the state, as CalMatters’ Byrhonda Lyons has reported.

To replace Guerrero as an associate justice of the California Supreme Court, Newsom nominated Kelli Evans, an Alameda County superior court judge who previously served as Newsom’s deputy legal affairs secretary and helped shape his moratorium on the death penalty, according to the governor’s office. If confirmed by the Commission on Judicial Appointments, Evans would be the court’s second openly LGBTQ+ justice after Martin Jenkins, whom Newsom appointed in 2020. Newsom has now nominated three justices to the seven-member court.

In other nomination news: Following two closed-door meetings this week, the Joint Legislative Audit Committee on Wednesday announced its selection of the three final candidates for California’s next state auditor. Newsom is now tasked with picking one of them to lead the independent agency charged with evaluating the performance of his own administration, which has been without a permanent auditor since Elaine Howle stepped down at the end of last year after 21 years on the job. The three finalists are:

The Assembly floor at the state Capitol on May 31, 2022. Photo by Miguel Gutierrez Jr., CalMatters

The suspense is almost over: Today, state lawmakers will determine the fate of some of the most controversial bills of the legislative session as part of a secretive process called the suspense file. During this infamous twice-annual procedure, legislators speed through a list of hundreds of proposals almost without pausing for breath, passing or killing them without a word of explanation. This process — which allows lawmakers to shelve proposals they consider too expensive — also permits them to silently eliminate bills that are contentious, opposed by powerful interest groups, or politically perilous — concerns that take on additional weight in an election year.

If I had a dollar for every time Kaiser Permanente — the health care giant that serves nearly a fourth of California’s population — was brought up during Wednesday’s inaugural hearing of the state Senate Select Committee on Mental Health and Addiction, I could retire today. The hearing focused on a new state law that went into effect July 1 that requires patients to receive follow-up mental health care within 10 business days unless it’s determined a longer wait won’t be detrimental. During the hearing, Kaiser mental health clinicians — some of whom are preparing to launch an open-ended strike Monday — said it isn’t close to meeting those requirements, and alleged it’s actively trying to bypass them. Some key takeaways:

Other things worth your time

Some stories may require a subscription to read

How this California program is making it easier for those leaving prison to earn degrees. // PBS NewsHour

Robert Rivas is confident he can become Assembly’s next Speaker. Can he hold on? // Monterey County Weekly

How California exported its worst problem to Texas. // The Atlantic

Home restaurants are supposed to help entrepreneurs. In one Bay Area county, half have closed. // San Francisco Chronicle

Offshore wind doesn’t exist in California, but it could account for 25% of state’s power in future following new goal from regulators. // San Francisco Chronicle