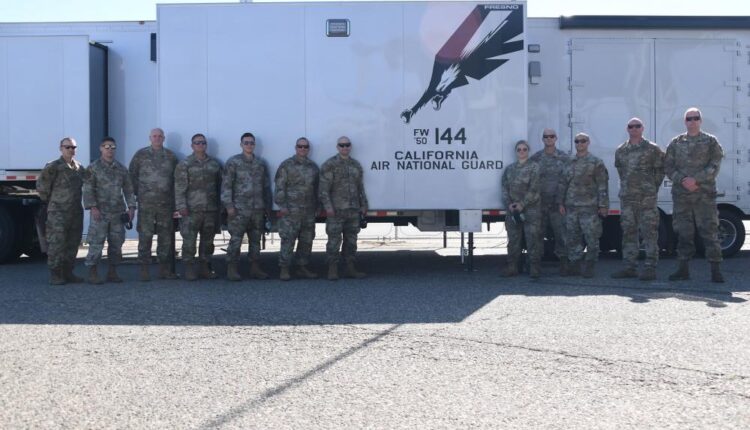 Since its fruition, the adaptive basing trailer prototype has created many opportunities for the members of the 144th Fighter Wing here, including facilitating a recent partnership with Guardsmen from the Tennessee Air National Guard’s 134th Air Refueling Wing.
The 144th Maintenance Group personnel showcased the capabilities of the Adaptive Basing prototype trailer and collaborated with the 134th Maintenance Group personnel on the Agile Combat Employment and Multi-capable Airmen concepts.
ACE is an Air Force operational concept which shifts military operations from centralized physical infrastructures to a network of smaller, dispersed locations. The prototype trailer facilitates ACE by enabling a small team of Multi-Capable Airmen to launch and recover jets in remote, austere locations.
“We are trying to apply the ideas conceptualized by the trailer to [our aircraft], the KC-135R,” said 1st Lt. Daniel Simmons, 134th Maintenance Squadron officer. “We are looking to leverage the capabilities contained in the adaptive basing trailer into a package more suitable to how we launch and recover our tankers. Our team has already been inspired by our visit to Fresno, and we are quickly trying to solidify a way forward in ACE operations.”
In addition to laying the foundation for ACE execution, this partnership has already paved the way for members from both units to seek future integration opportunities, such as training exercises or proof-of-concept exercises.
“It was important for us to see how a unit leading the way in ACE tactics was operating so that we can build on concepts that are already in use,” Simmons said. “Furthermore, it will allow us to more seamlessly integrate with the 144th FW and other ACE capable units in the near future. Over the next six months, we will be attempting to field our first operable ACE team, and we will be utilizing the information gathered and contacts made during our visit in order to reach our goal.”
The discussions between members of the 144th FW and the 134th ARW about equipment and methods for ACE execution illustrate a symbolic partnership within the US Air Force. This collaborative effort is a testament to how innovation can bring units together in a dynamic, evolving Air Force.

this work, Prototype trailer brings together Fresno and Tennessee Guardby SSgt Mercedes Tayloridentified by DVIDSmust comply with the restrictions shown on https://www.dvidshub.net/about/copyright.

FSCT to host tryouts for “A Christmas Story”