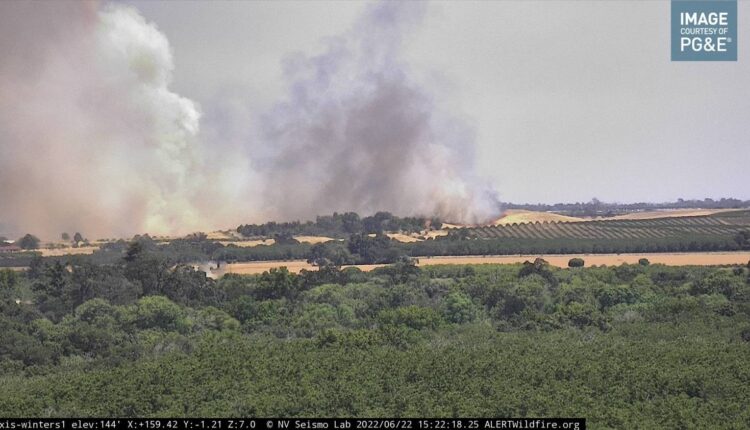 WINTERS (CBS13) — A fast-moving grass fire reached right up to several homes near Winters as winds and triple-digit temperatures created a dangerous combination Wednesday. By the evening, homeowners were definitely feeling relief.

Chuck Pearce, who lives in the area, ordered a special delivery of pizza dinners for firefighters doing mop-up work.

“Here I’ll put it in the truck for you,” Pearce told firefighters. “You guys kept it so I still have an address.”

This grass fire spread almost, tearing through vegetation, up hillsides, and next to homes just south of Winters and over the Solano County line.

The Solano County Sheriff’s Office issued mandatory evacuations for some homes. Pearce got too close to the flames trying to cut his own fire break.

“Oh yeah, it was burning my skin,” Pearce said.

Pearce’s home was saved, although some of his property was not. He lost a van and a trailer.

“My wife called me, she yelled, ‘fire,’ ” said Wally Pearce who lives up the road from his son.

Wally Pearce watched as flames moved dangerously close to his house, too.

A recent report by First Street Foundation, which studies fire risk, showed Winters ranks as one of the highest fire danger communities in the region, with more than 2,500 properties at risk.

Firefighters used air and ground attacks Wednesday. The fire was stopped at about 110 acres.

Things to do in Stockton: concerts, festivals, car shows