Ex-Kings Owner Shaquille O’Neal On Sacramento Kings In 2002, “We’re Not Worried About The Sacramento Queens” 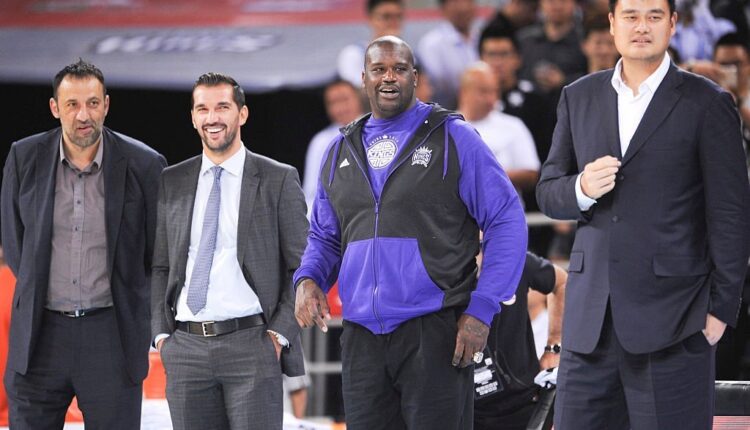 BEIJING, CHINA – OCTOBER 15: (CHINA OUT) Former NBA stars Vlade Divac, Peja Stojakovic, Shaquille O’Neal and Yao Ming take in the game between the Brooklyn Nets and the Sacramento Kings as part of the 2014 NBA Global Games at the MasterCard Center on October 15, 2014 in Beijing, China. (Photo by Visual China Group via Getty Images/Visual China Group via Getty Images)

On the latest episode of the “Legacy: The True Story of the Los Angeles Lakers. The Lakers were in the 2002 Western Conference Finals against their rivals, the Sacramento Kings, who were facing for the third straight season in the playoffs. During the offseason, Shaquille O’Neal said, “We’re not worried about the Sacramento Queens. Not at all…Write it down and send it to them I don’t care.”

The Lakers and Kings would have a seven-game series before the Lakers moved on to the finals to sweep the then New Jersey Nets. However, later in the doc, Shaq told the Kings that they were playing the ‘Lake Show,’ and they were going to the finals.

“This is the #LakeShow you’re playing me, Kobe, Bob, B Shaw, and Rick I’m out there w some dogs… We going to the Finals,” said Shaq.

Disgrace official Tim Donaghy did not ref game six of the Western Conference Finals Between the Kings and Lakers. However, he say, it has gone down has the worse officiated game in the history of the NBA.

“I didn’t ref the Lakers/Kings playoff game, but the game has gone down as the worse officiated game in the history of the NBA.”