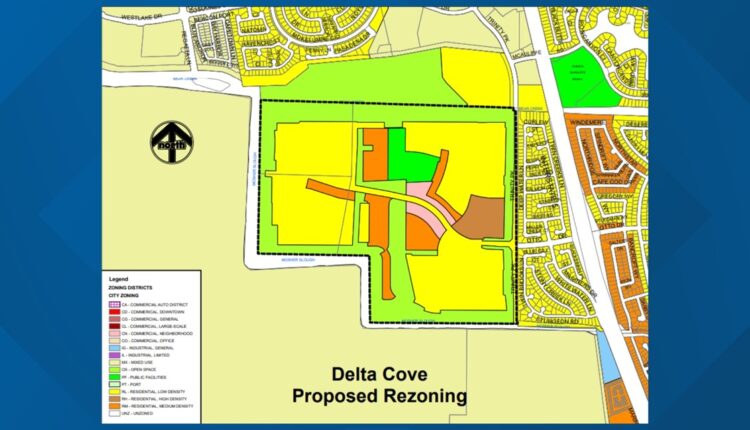 The Delta Cove project would extend both Trinity Parkway and Otto Drive to make way for more than 1,500 new homes on an undeveloped lot in north Stockton.

The Delta Cove Project, first approved by Stockton’s City Council in 2010, would extend Trinity Parkway and Otto Drive, developing on an empty plot of land currently owned by the AG Spanos Companies, a leading construction and development firm in Stockton.

The 360-acre site is located just beyond the southerly dead-end of Trinity Parkway and is surrounded by the Mosher Slough to the west and south and Bear Creek to the north.

The plan to develop on the large plot of land would force the extension of both Otto Drive and Trinity Parkway and the completion of the dead-end bridge at the end of Trinity Parkway.

In city filings, the land’s owner and developer, AG Spanos Companies, says the Delta Cove project would consist of a 280-unit condominium project and a new 1,545-unit residential community with parks, open space and commercial use.

AG Spanos Companies is requesting a 15-year extension on the development agreement with the City of Stockton with a possibility of an additional 5-year extension in the future.

Since the project’s initial approval by Stockton’s city council more than a decade ago, AG Spanos Companies have filed for several extensions on individual maps for the project.

In a recommendation filing, Stockton city staff members say the company has exhausted all the extensions possible for individual maps. Without approving the extension for the development agreement as a whole, the city’s agreement with the company to develop on the land was slated to expire on Sept. 9.

“The Development Agreement is in the best interests of the City, as it would promote housing, commercial, and recreational development and employment opportunities associated with those uses,” city staff members said in their filing recommending the approval of the extension. “The community will benefit from the completion of the project via the new infrastructure improvements, new jobs, housing opportunities, and civic amenities including trails, parks, and schools.”

According to city staff, a public virtual meeting was held on Aug. 10 to discuss the proposed agreement extension and five citizens showed up raising questions on the status of the project, but not objecting to the extension request.

The request for the extension of the agreement on the project is slated to go before Stockton’s planning commission during its Sept. 22 meeting where commissioners will vote on whether to approve the extension.

ABC10 reached out to AG Spanos Companies for comment Saturday, but did not immediately hear back.

Watch More Stockton Stories from ABC10: ‘jumping’ | A crime that law enforcement says is on the rise in our cities