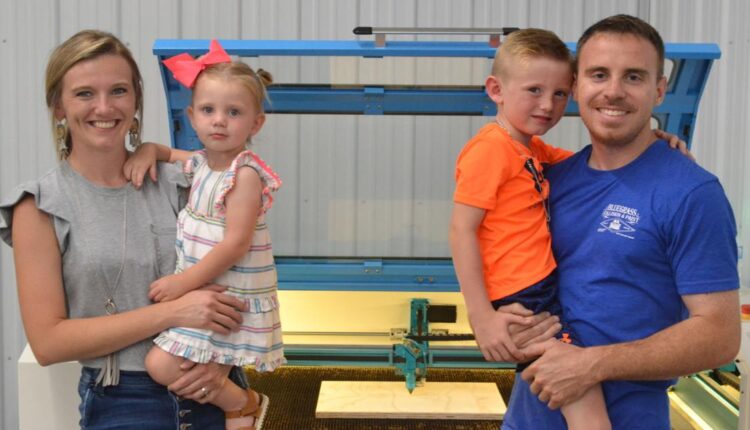 When the coronavirus pandemic caused Sacramento resident Stephen Edmonds to be laid off from his job for about eight weeks in 2020, he went looking for something to pass the time.

“I got really bored and I started building a deer feeder and kind of wanted some apparel-like hats to go along with it,” Edmonds, 31, said. “(My wife and I) were laying in bed, and I was wracking my brain trying to think of something — a name for a business like that.”

From there, West KY Slayor Customs LLC was born. And though Edmonds didn’t think it would actually go anywhere, it has become a small family business that he and his wife, Chelsea Edmonds, 28, run out of their garage.

At first, Stephen Edmonds was working primarily in hunting and outdoor apparel as a hobby before shifting gears to expand to a wider audience. He now specializes in a number of custom products, ranging from hats, wall signs, door hangers, acrylic night lights, tumblers, door mats, address signs and more.

They’ve even ventured into making handwritten recipes engraved on cutting boards and signs that consist of QR codes that link a customer to a recording of a loved one’s voice.

“We can customize just about anything that anyone wants,” Stephen Edmonds said.

The name comes from the inspiration of their children’s name — son Weston, 5, and daughter Saylor, 2.

The growth of the business has been promising, Stephen Edmonds said, but he admits its start was a bit like entering unknown territory.

“I didn’t even know how to make hats or anything,” he said. “I just did a lot of research … and figured out that you can laser and engrave leather and sew it on hats. It’s really popular.”

The business accepts orders through Facebook, where the Edmonds receive messages daily and between five to 10 order requests per week. Each order is completed within one to two weeks.

Stephen Edmonds at first used a small diode laser before recently upgrading to a Thunder Laser machine in order to meet the high demand and the range of requests they receive.

The business recently completed its biggest project yet when the Edmonds were asked to make the new front entry signage for Riverside Care & Rehabilitation Center in Calhoun, where Chelsea Edmonds works in accounting.

The business not only serves local customers, but is now receiving orders from outside Kentucky.

“I was just looking for something to do, and took it off,” Stephen Edmonds said. “… Honestly, we’ve had to stop advertising on Facebook, because if we put one post on there, we just get swamped, and it’s hard to get caught up.”

“It’s a side gig — but really, it’s flourished into a very well growing small business for sure,” Chelsea Edmonds said.

“We cut the leather and engrave it and when it comes time to sew it, we kind of wait till the kids are in bed (and use) the sewing machine (that is) upstairs,” he said. “We can sew about 15 hats an hour or so. We can knock a pretty big order out pretty quick if we have the patches ready to go.”

Chelsea Edmonds specifically enjoys the design portion of the orders.

“Art has been a passion for me in the past …,” she said. “I’ve done a lot of artwork and have had a lot of things published, so that’s kind of my area.”

That type of teamwork has helped keep the business flourishing.

“We work really well together. It’s definitely a blessing to be able to have my husband working alongside me,” Chelsea Edmonds said. “We get along very well, we build things very well together, and we kind of brainstorm on different things.”

One of Edmonds’ goals is to focus on what the business could do for their children’s futures.

“One of the main reasons why I feel like we started this was (that) we’re middle-class; we didn’t come from rich families, and we wanted something that our kids could actually invest in as they grow as well,” Chelsea Edmonds said. “Once our kids get old enough to where they can start doing this themselves, this will be their little business.”

“If it takes off big — great,” Stephen Edmonds said. “I think this business — if you wanted to do it full-time — I absolutely think you can make great money doing it and the business would get as big as you want it to get; I think it will grow as much as you want and how much you put into it.”

For now, the Edmonds are happy to be able to offer this service to the people who want it with guidance from above.

“Our customers definitely keep us going,” Chelsea Edmonds said. “We like to keep our customers happy, and we like to see their ideas on things as well.”

“We are great time in church, and without God, none of this would be possible,” Stephen Edmonds said. “Through this business from the very beginning, we have always asked God to allow the business to grow and prosper; and he has done just that for sure.”