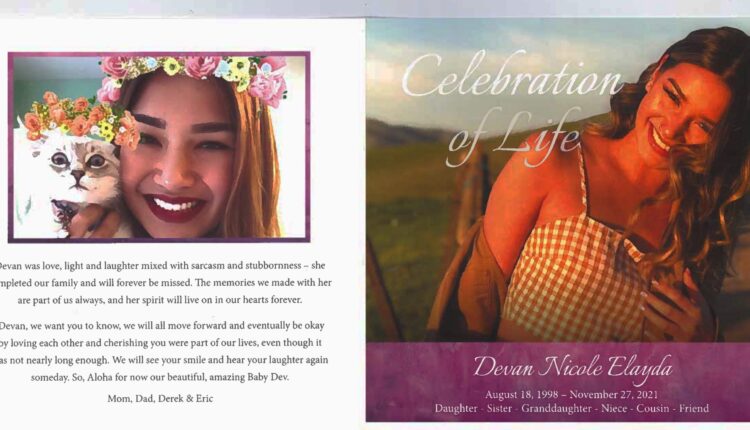 One year after a Fresno State criminology major was killed in a hit-and-run accident on Highway 180, a police report confirmed the student was not drunk at the wheel.

Devan Elayda’s death on Nov. 27, 2021, was covered by local and national news publications due to her popularity on social media. She was a popular online influencer for fashion, with a prominent fan base on TikTok and Instagram.

Based upon preliminary information provided by police, mediaoriginally reported that Elayda was driving before pulling over on State Route 180. After exiting the car, she was hit while walking across the highway lane.

However, according to a police report that was released in August, Elayda was not the driver. At the wheel was a friend of hers, the report said.

Now the lawyer for Elayda’s case is looking for justice and planning to file a lawsuit against the friend.

“We’re just trying to bring light to this beautiful girl’s spirit and character, and try to bring some closure to the family to reveal the truth,” said Zoi Jones, the attorney representing Elayda’s family.

On the night of the accident, Elayda was a passenger in the car and was arguing with a friend who then pulled over on the highway by the cement barricades, according to the police report. Elayda then left the vehicle, walked across the lane and was hit by a Lexus that proceeded to drive away.

Police were able to contact the driver the following day and obtain a statement from him, according to the report. Last year, California Highway Patrol identified the driver as a 16-year-old male. The police report issued in August confirmed the driver who hit Elayda did not have a driver’s license.

The police report recommends the teenager be charged with both driving without a license and with a hit-and-run.

Jones said charges have been filed against the driver and the story will be updated accordingly.

Elayda called her friend in need of a ride because she did not have a license and was drinking alcohol, according to Jones. Jones said the friend was responsible for Elayda’s safety and shouldn’t have pulled over on the highway.

Jones said the friend song to the police about who was driving. It has not yet been confirmed if the friend was lying or if charges have been filed for lying to police.

Due to Elayda’s involvement with alcohol that day and the following national news coverage reporting her as the driver, Jones said Elayda’s reputation was tarnished.

“The information that was relayed was incorrect because of lies that were told at the scene. It completely assassinated Devan’s character and the circumstances surrounding her death, which caused a lot of grief for the family, who was already grieving,” Jones said.

Police did not perform a blood alcohol test on the friend, but Jones suspects the person was also under the influence.

“[Elayda] is a girl, 23-years-old, who was out with her friends, but acting responsibly and calling for what she thought was a sober ride… and then when the police came, the driver accused Devan of driving to protect himself,” Jones said.

Elayda was a criminology major with a forensics behavioral sciences option. She was originally from Hollister and graduated from San Benito High School.

A year ago, the criminology department and Fresno State sent out a message to students in memory of Elayda.

family over the weekend… Our hearts are with Devan’s family and friends and our Fresno State community who are feeling the loss from this tragic accident,” said Carolyn Coon, interim vice president of Student Affairs & Enrollment Management, in the message.