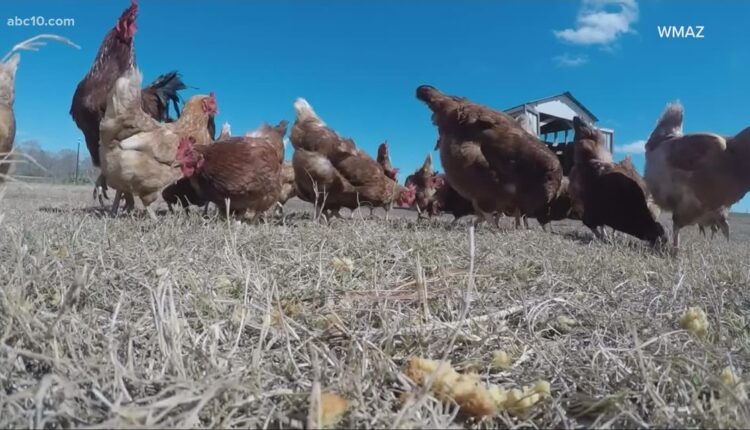 The first H5N1 Bird Flu outbreak in California is in Sacramento County.

SACRAMENTO, Calif. — Farmers and officials with the California Poultry Federation say their concerns are growing with the recent bird flu outbreak in Sacramento County.

It’s the first H5N1 Bird Flu outbreak in California. According to CDC data, the outbreak was on Wednesday, Aug. 10.

The outbreak was in a flock of about 10 birds and they belonged to a backyard producer. The CDC qualifies them as non-poultry, but for the California Poultry Federation and those that make their livelihood off birds, concerns are at an all-time high.

Biosecurity for poultry farms is set at the highest level due to concerns about bird flu.

Ken Mitchell of Mitchell Farms is going so far as to not let mail and deliveries come onto his property. He’s also hauling his own trash to make sure interaction is limited.

“Anybody entering the facility, the UPS driver, everything doesn’t go past the gate. Everything is dropped off so we can control what we can control,” said Mitchell.

The current outbreak has killed more than 40 million turkeys and chickens across the county. Bird flu viruses do not normally infect humans, but it can happen.

What he can’t control is wild birds flying overhead or his other concern — bird flu appears in backyard chicken flocks and owners aren’t aware.

Bill Mattos, the President of the California Poultry Federation, echoes the concerns of farmers: the threat of bird flu on top of existing productivity concerns. It’s not bird flu driving up the price of poultry but staffing shortages with productivity sitting around 85%.

“We can’t supply all of California with California grown — we can only supply half the state right now,” said Mattos.

It’s also important to note this doesn’t impact the food you’re currently buying in stores, and there are no cases in commercial flocks in California right now.

Still, this impacts California the most because Californians consume more chicken, turkey, eggs than other state. On average, each Californian will eat 20 chickens a year, according to the California Poultry Federation.

Concern is only going to grow as wild birds migrate in fall back over California because bird flu cases are being seen in wild birds.

Due to the concern for bird flu, the Sacramento Zoo has moved its birds inside and drained the flamingo pool to not attract wild birds. Two ponds at William Regional Land Parks were also drained.