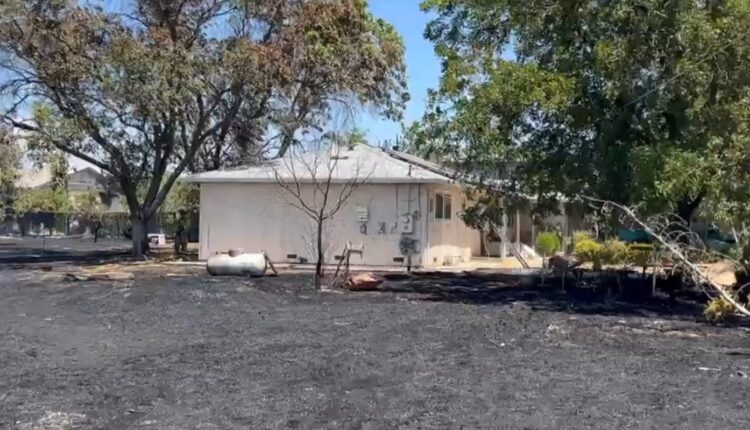 SACRAMENTO (CBS13) — Firefighters knocked down flames in the attic of a South Sacramento home Monday after a vegetation fire burned through the area, charring roughly three acres.

The Sacramento Metropolitan Fire District says the fire originated near a homeless encampment and spread to threaten multiple homes. However, only one home caught fire and fire crews were able to extinguish the flames.

Yael Pacis has lived along Roseview Way in Sacramento County for six years.

“It came right up against our fence line and it’s pretty scary, and I figured moving out might be the best thing at this point,” Pacis said.

While officials didn’t immediately detail the exact area where the fire started, video posted on Twitter showed a fenced-in yard completely blackened, as well as a stretch of grassland burned behind the fence.

Pacis was grateful when a firefighting helicopter showed up just in time.

“It was pretty dramatic. It’s the first time I’ve ever seen it drop something like that literally in a residential neighborhood in the middle of the day,” he said.

Our CBS13 crew met the homeowners who lost their property, but they didn’t want to talk on camera and were frustrated after Sacramento Metro Fire said a nearby homeless encampment is to blame for the destruction.

“It’s a significant concern. A lot of Sac County is made up of fields that bump up directly into neighborhoods,” Metro Fire Captain Parker Wilbourn said. “That fire has the ability to spread into adjacent homes and threaten folks.”

Wilbourn explained how often homeless encampments are the root of county fires.

“At this point, we are seeing homeless encampment fires starting every day and sometimes multiple times a day,” Wilbourn said. “This is a very significant issue in our county and for our community.”