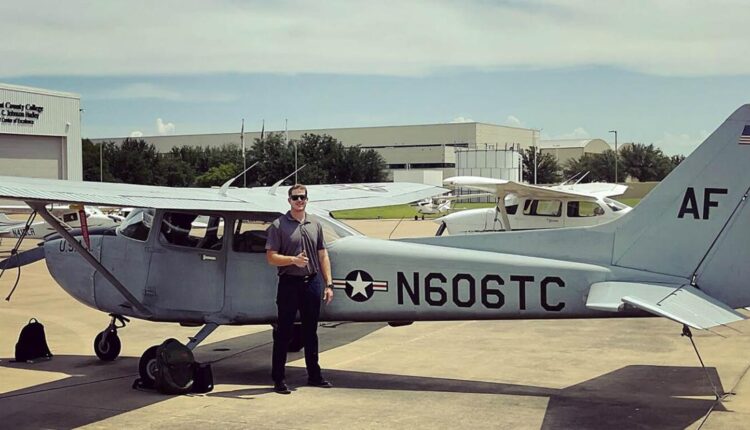 Some things just feel normal when you grow up in a family of pilots, like flying up to Turlock or Stockton to see family, or down to Baja California, Mexico, to go fishing.

“Those were always neat trips to go on as a kid,” Matt Darr said, “and I didn’t realize at the time that that was kind of uncommon. It was just what we did.”

For years, Darr was the odd one out in a family where his grandfather, parents, uncles, cousins ​​and brother immersed themselves in the world of aviation.

Instead, he became one of just a few Bakersfield natives to lock down NFL starting spots in the last decade, winning the Miami Dolphins’ punting job as an undrafted free agent in 2015 and staying there through September 2017.

As an offseason project in 2018, Darr got his private pilot’s license under longtime Rosamond pilot Eric Hansen, with minimal long-term ambitions in the field. But then Darr got cut by the New York Jets during the 2019 preseason, and spent more than a year and a half trying to get looks as a street free agent during the pandemic.

“When I kind of saw that my career was coming to a close,” he said, “and I started thinking about what I might enjoy doing as a career, aviation was one of the things at the top of the list.”

The Darr aviation tradition goes back to Matt’s grandfather, who was in the Air Force in World War II and served at Edwards Air Force Base. He later bought property near Boron that the family still owns.

Darr said his father, Don, practically taught himself to fly on a Cessna 195 plane, and as early as high school would cruise to and from Arizona with his brother to visit family. Later, both brothers served in Vietnam, and Don earned a Distinguished Flying Cross and Bronze Star for successfully landing a plane with nonfunctional controls during a training exercise, according to a 2015 article in The Palm Beach Post.

Matt had a somewhat different experience in his youth. As a star thrower at Frontier, he won three combined state titles between the shot put and discus. But his true calling was in football, where he became the nation’s top-ranked punter, and ultimately attended Tennessee. He was in and out of the starting role with the Volunteers but as a redshirt senior in 2014 punted 80 times with a 42.2-yard average.

Darr’s brother got his private pilot’s license while in college at Cal Poly. For Darr, it had to wait until the 2018 offseason, when he was a free agent after leaving the Dolphins.

Hansen, who became Darr’s first official instructor, doesn’t teach for a living, and so “can be very picky” about he takes on. But in Darr, he found a student “among the most motivated I’ve ever dealt with.”

“Really sharp guy, really smart,” Hansen said, “and his physical abilities, (his) hands and ability to make things happen the way your brain’s telling you to, is really off the wall.”

Darr passed his check ride in Bakersfield with flying colors. But at the time, as Hansen points out, Darr was still invested in his NFL career.

He caught on with Buffalo for several games in 2018 and New York for training camp the following year, but saw his opportunities start to dry up after that.

“The amount of effort that you put in year-round as a free agent to stay workout-ready and game ready really takes a toll on you,” Darr said, “more so even then when you’re really on a roster because you don ‘t get the offseason to recover.”

Eventually, he set himself a hard deadline of 2021 training camp by which he would retire if he didn’t get signed. To help enforce it, he enrolled in flight school at Tarrant County College in Fort Worth, with a start date of June 1.

With his private pilot’s license already in hand, next up for Darr was his instrument rating, which allows a pilot to fly in the clouds with no reference to the ground, and then his commercial certification.

“I had scholarships from the NFL as a former player to use for flight training costs,” he said, “and I was also recent enough for the NFL to still qualify under my active player benefits for tuition reimbursement.”

He got his commercial rating and multi-engine rating concurrently in December, and could have stopped there to become an airline pilot, but then by May 11, less than a year after his retirement, became a certified instructor himself.

Darr said he doesn’t want to teach long-term — though his experience showing people how to punt has helped him become a better teacher, he added. Instead, he hopes to fly big cargo jets for UPS or FedEx.

“You’re kind of working behind the scenes,” he said, “but the ones that are in that industry, they perform it at a really high level.”

Though it took him longer to get started, Darr has already transcended where many of his family members stopped their aviation training.

“They’re all excited and they’ve been a huge help and resource when I was starting out,” he said, “and then just the support of having them to understand what I was going through with flight training.”

Hansen said he’s happy to see one of his students reach new heights.

“Flying is kind of a bug,” Hansen said. “Once you start flying, everything else just looks like something else.”