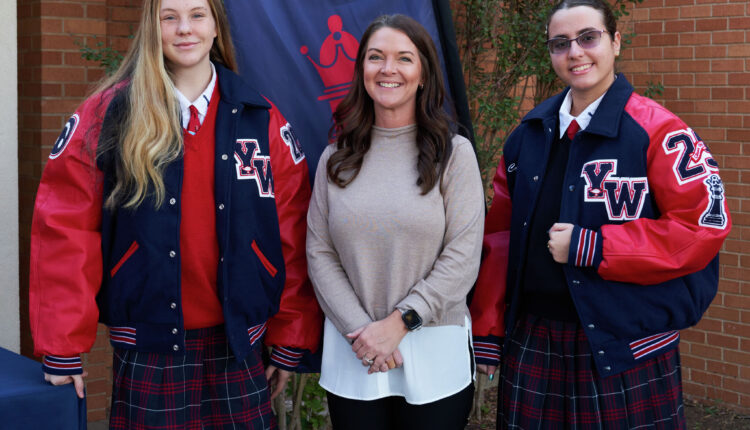 Laura Doughty admits that she always knew “kinda” she wanted to pursue a career in education, but it wasn’t until after college that she found her calling.

Doughty was born and raised in Fort Stockton and felt the urge to teach as a child after seeing her mother — a now-retired teacher of 32 years — in action. Yet her ambitions changed upon entering college.

She received a bachelor’s degree in mass communication, with an emphasis in electronic media, from Texas State University. “I was thinking at the time that I would become a TV journalist,” Doughty said. “But then I met a boy.”

Doughty married right out of college, and her former husband’s enlistment in the Army took her to Kansas. She happened upon a paraprofessional opportunity at a local middle school, where she worked with special education students. The experience changed the trajectory of her career plans.

“I was hooked,” Doughty said. “Working with kids is what I really wanted to do, especially middle school kids. Junior high schoolers are at a pivotal time in their lives. They’re figuring out their identities, and there’s something about this age group that I really like.”

Then, as happens in times of war, her former husband was deployed. Left alone in Kansas with a three-month-old child and determined to advance in her educational career, she changed course.

Doughty moved back home and earned her teaching certificate through iteachTEXAS. It was tough—but worth it.

“At the time, I taught at Crockett Middle School in Pecos, about an hour’s drive each way,” she said. “My mother would drop off and pick up my child every day from day care so I could be a teacher. And for that, I’m forever grateful.”

Then, Kansas came calling once again. Doughty taught middle school at the Army base.

“Everyone in Kansas had a master’s degree and aimed to pursue educational leadership, which inspired me to go back to school and do the same,” she said.

Doughty headed back to West Texas once again to pursue her master’s at the University of Texas Permian Basin, and a certain professor — Jennifer Seybert — would play a big role in her career.

After teaching for a time in Big Spring, Doughty took a position as a teacher at Sam Houston Elementary. She then moved to Goddard Junior High, where she taught English and was the department chairman, her first leadership opportunity.

In 2019, Midland ISD entered into partnership with the Young Women’s Preparatory Network to open a YWLA campus. Seybert, the school’s first principal, had Doughty in mind to fill the role of dean of students, her first opportunity as an administrator.

“There were a lot of firsts not just for me, but for everyone at YWLA when it opened: New campus. New concept. New position. New culture,” Doughty said. “But I love a challenge.”

In 2021, Seybert was tapped to become principal at Midland High School. “She wanted me to apply to lead YWLA, and I didn’t feel like I was ready,” Doughty said. “However, after doing a lot of research, I took the plunge.”

While she now leads a school, what keeps her in education is the same as when she was a paraprofessional 15 years ago. Every day she gets to help students build their self-confidence and revels in the relationships she builds along the way.

“From the moment I get to school each day, I know this is where I want to be,” she said.

Trevor Hawes is a Communications Specialist at Midland ISD.

Don’t Drill Your Own Teeth! And Quashing Other Rotten Dental Advice on TikTok