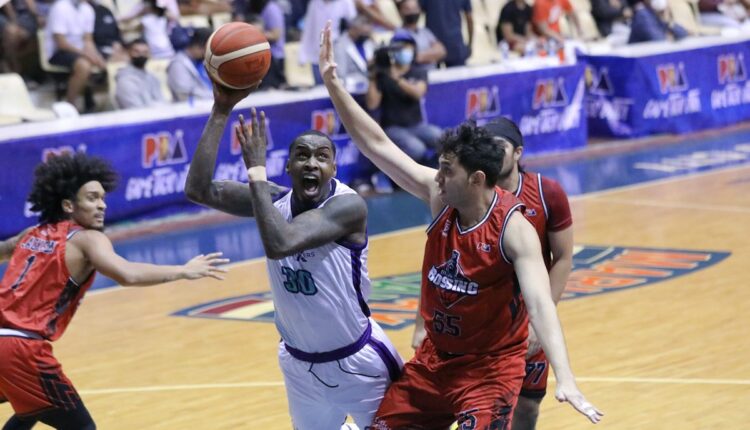 Miller picked up his fourth foul in the first half but managed to stay in the game, finishing with 22 points, 19 rebounds, 4 blocks, and 2 steals to lead the FiberXers to their fourth straight victory.

Converge also got timely contributions from Alec Stockton, who notched a career-high 15 points to go with 8 rebounds as he anchored their tide-turning run in the fourth quarter.

The Bossing led 68-66 with five minutes left before Stockton sparked an 11-0 blitz that raised the FiberXers’ record to 5-2 for solo third place.

Stockton scored 4 points during that stretch, while Miller delivered the last 5 points of that stretch as Converge continues to make case for a top-two finish, which comes with a twice-to-beat advantage in the quarterfinals.

Abu Tratter finished with a double-double of 12 points and 10 rebounds, while Justin Arana added 8 points, 9 rebounds, and 2 steals before leaving the game late in the third quarter after seemingly hurting his hamstring.

Foul trouble plagued Miller as he picked up his fourth foul with seven minutes left in the second quarter, forcing him to sit out the rest of the first half.

But the prolonged rest worked wonders for the former NBA player, who scattered 15 points in the second half alone to outduel Blackwater counterpart Cameron Krutwig.

Krutwig posted 16 points, 15 rebounds, and 4 assists, but he got limited to just 2 points in the last two quarters as he battled cramps after trying to keep pace with the FiberXers’ past-faced offense.

The American import subbed out four minutes remaining in the game, and by the time he returned with a minute left, Converge already grabbed a 74-68 lead.

Rey Suerte netted 15 points and Ato Ular put up 13 points and 8 rebounds for Blackwater, which lost back-to-back games for the first time this conference.

Missing the presence of veterans Baser Amer and Troy Rosario, the Bossing dropped to 3-5.

Commentary: A fight for power in Sacramento tests boundaries of campaign finance law