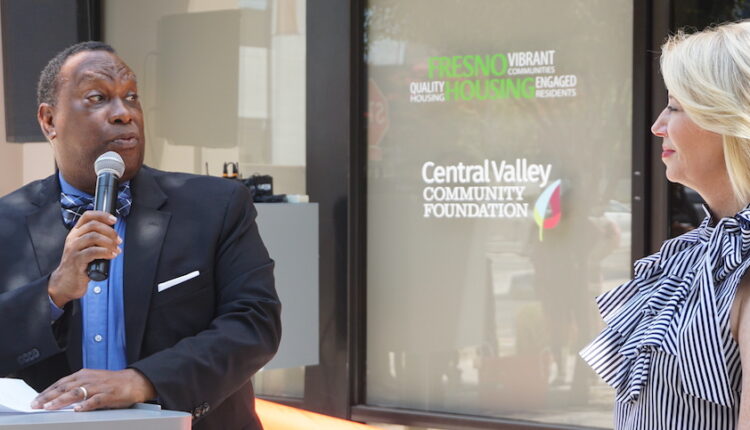 A ribbon cutting in Downtown Fresno Wednesday for Fresno Housing and the Central Valley Community Foundation marks the beginning of a relationship that goes beyond tenant and landlord.

Executive Director Ashley Swearengin said the move puts them “in the heart of the region” they exist to serve. The location at 1260 Fulton St. means easy access for the six counties the nonprofit serves. Additionally, many of their nonprofit partners are within one mile of the office, Swearengin said.

Fresno Housing purchased the two-story building at the corner of Merced and Fulton streets in 2020. The expansion allows Fresno Housing to move its board room and housing management team to the new building.

The expansion gives Fresno Housing space to expand the lobby and create a children’s area for residents. Fresno Housing will have approximately 30 staff at the new location.

The relationship between Fresno Housing and the foundation goes beyond sharing space, said Tyrone Roderick Williams, president and CEO of Fresno Housing.

One of the organization’s goals was to expand summer learning for children in Fresno Housing’s various programs.

They had 11 different activities supporting literacy and learning. The foundation donated $200,000 to the efforts, said Williams — the largest single donation received by Fresno Housing “in decades.”

“We shared our vision with the Community Foundation, and they joined with us in a momentous partnership that has significant financial implications but even greater personal implications for all those students who benefit,” Williams said.

Fresno Housing also announced a partnership in July with Fresno State to bring students to do service work for the organization, including teaching, social work and psychological services to residents. Under the housing development team, students in engineering and construction disciplines could also find real-life experiences, Williams said.

Being one of the region’s most prolific housing developers, the mission at Fresno Housing matches up with that of the foundation, Swearengin said.