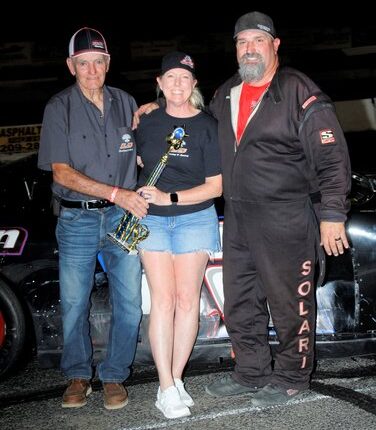 Escalon driver Sam Solari continues to be hot as ghost pepper chili after he extended his recent hot streak by rolling to his fourth Stockton Late Model feature victory in his last five starts at the 99 Speedway on Saturday night.

Solari started the 50-lap feature on Aug. 13 from the second row of the 10-car field just behind Gary Shafer Jr. and Ty Carlson, both of Stockton. He made quick work of Carlson and immediately set his sights on Shafer, methodically reeling the defending track champion in over the next several laps.

Solari was eventually able to get underneath of Shafer on multiple occasions, but despite his best efforts he was never able to gain a big enough advantage to complete the pass. On one attempt the pair rubbed doors hard enough to cause them to slide sideways up the bank coming out of the turn before both were able to regain control and soldier on.

“We were running door-to-door and it was racing just hard when we got together. We weren’t trying to wreck each other, but when you are racing that hard anything can happen,” explained Solari, the 2018 track champion. “When we got sideways Shafer and I were both able to save it and drive on. That was kind of fun.”

Just after midrace the action was suddenly brought to a halt by one of the most bizarre cautions of the season when someone from the infield threw a push broom onto the edge of the front straightaway. Although the restart was single file, it proved to be pivotal when Solari timed the green flag perfectly to get the jump on Shafer and squeeze by him on the low side of the turn to take the lead.

Solari was never challenged for the rest of the race and slowly pulled away from the pack with the help of Sean Hingorani, of Newport Beach, who was now engaged with Shafer in a fight for the second spot. Hingorani would ultimately prevail over Shafer to grab second place while Carlson and season points leader JoJo Stearns, of Stockton, rounded out the top five.

“We showed up with old tires tonight because we are on a budget so I knew we were in for tough fight,” said Solari, as he celebrated on the front straight. “When I cleared Shafer my spotter told me they were two-wide behind me so I knew could take it easy and bring it home.”

The always entertaining B-4 class did not disappoint as season points leader Joe Flowers, of Manteca, fought tooth and nail with Andy Rumsey and Barrett Sugden, both of Stockton, for the race lead throughout the first half of their 25-lap main. The trio went three-wide on multiple occasions, twice forcing Rumsey onto the infield grass as they entered the corner to avoid a collision.

Rumsey continued to press the leaders and he eventually got the last laugh when Flowers spun out on lap 12 as he desperately tried to fend off his pursuers. Although Flowers was done for the night Rumsey still had to hold off the hard charging Sugden for the remainder of the race to earn his first win of the season.

“We’ve been battling those guys all season so it feels good to finally get a win,” Rumsey said. “We had to work really hard for this including mowing some lawn when we were three-wide.”

After missing the previous race, Bomber division points leader Donnie Darter, of Valley Springs, returned to action and picked up his seventh victory of the season, but unlike most of his previous victories, this one was far from easy.

After tangling with Salida’s Seth Holman in their heat race Darter and his team scrambled to make sufficient repairs in time to start the main event while Holman, the winner of the previous two races, packed up for the night.

Despite Holman’s absence Darter still had his hands full in the 25-lap feature when Stockton’s Kayci Phillips stayed glued to his back bumper over the last 20 laps. Phillips, however, could never find a way to make the pass as Darter survived the challenge to take the checkered flag

“There was something going on in the back end, drive line or something so we were lucky just to make it to the finish,” admitted Darter. “I have to thank my crew because we got pretty beat up in that heat race.”

Ethan Nascimento, of Manteca, led all 35-laps of the Legends Tour race to earn his first victory of the year and the $1,000 first place money that went with it on Saturday.

After gaining the pole thanks to a four-car invert, Nascimento immediately drove into the lead and then fought off repeated challenges from Rocklin’s Robert Czub, and Sebastopol’s Cody Winchel in the closing laps following a couple of late race restarts that bunched the field.

“They tried to pinch me down on that last restart, but I wasn’t gonna let them get away with that,” said Nascimento, age 15. “I am going to put the money in the bank and use it to help get into NASCAR.”

Stockton’s Scottie Crawford celebrated his 17th birthday by taking his third consecutive win in the B-4 Juniors division.

Racing returns to the 99 Speedway on Saturday, Sept. 3, with a First Responders Night program that includes the Stockton Late Models, Bombers, B-4s, B-4 Juniors and North State Modifieds.

Prior to that, on Saturday, Aug. 27, the Stockton Dirt Track, located at the San Joaquin Fairgrounds, will be hosting the Champions Classic featuring the King of the West-NARC Fujitsu 410 Sprint Car Series, Hunt Magneto Wingless Tour and Legends of Kearney Bowl.

Lawn conversion, xeriscapes and the future of landscaping in CA

Newsom, Energizer Bunny of Sacramento politics, wants to make a deal with ‘the devil’