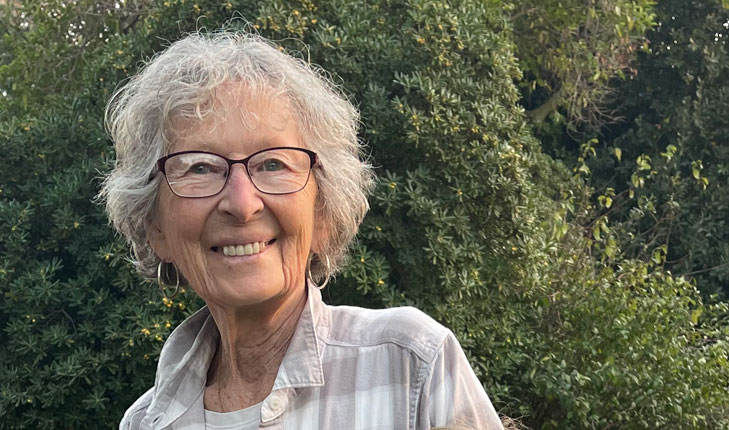 Frances Levine, whose gift to Fresno State of her US poet laureate husband’s extensive personal book collection sparked the creation of the Philip Levine Reading Room inside the University library, passed away in Fresno on June 13. She was 94.

The generosity of Frances Levine — known by friends as “Franny” — was emblematic of her life in Fresno. For more than 60 years, she was the welcoming center of the Levine home, which always offered an open door to poets and artists from Fresno and beyond.

dr Honora Chapman, dean of the College of Arts and Humanities at Fresno State, said Levine’s care and concern for Fresno State students continues to inspire.

“When Franny donated Phil’s library to the University, we then could create a beautiful reading room in his memory for all students to enjoy,” Chapman said. “She also gave us lovely personal photos and prints that enliven this space with poetic art and good humour. Their legacy will surely inspire future generations of student writers to become creative thinkers who make the world a better place, just as Franny and Phil did.”

“Her contributions elevated our sense of community and fomented our resolve to forge a more embracing and multicultural environment,” Jiménez-Sandoval said. “She was creative, bright and warm. Franny’s spirited presence illuminated conversation, reflection and a sense of togetherness.”

Many knew Franny as the wife of Philip Levine, the Pulitzer Prize-winning poet and Fresno State professor emeritus of English. She was also, in her own right, a painter and sketchbook artist, a gardener, a chef and cookbook writer, and a community volunteer. She loved writing letters to friends, doing the daily New York Times crossword puzzle, and reading extensively the latest literary fiction and crime novels by Donna Leon and Martin Walker.

Frances Joan Artley was born in 1927 in Hampton, Iowa. Her father, Wayne Clifford Artley, was a banker; her mother, Levina Riggs, what an X-ray technician at the local hospital.

Philip Levine taught at Fresno State from 1958 to 1992, and the Levines remained closely connected to the University’s Creative Writing Program. He also taught at Tufts, Columbia and New York universities, and until Phil’s death in 2015 they maintained homes in both Fresno and Brooklyn.

In the family’s early years, Franny Levine worked designing costumes and sets for college theater productions, according to her son, Mark Levine. But it was his mother’s “audacious generosity” and “tremendous sense of morality,” he said, that touched so many people.

Throughout her life, Franny Levine produced hundreds of paintings and sketchbooks, most of which she gave to friends as gifts. Inspired by the family’s travels, she sketched and then painted landscapes from all over the world. She drew still lives of fruit on a table, seasonal flowers in a vase and views out of whatever window she found herself in front of. Her friend Dianne Hanzlicek said Franny was “happiest when sketching” and making art.

In the 1960s and ’70s, Mark Levine said his parents were vocal supporters of the civil rights movement and outspoken critics of the Vietnam War. With her friend Joan Poss, Franny Levine in 1972 volunteered to co-edit a cookbook featuring recipes by founders of the Fresno branch of the Women’s International League for Peace and Freedom. Proceeds went toward anti-war efforts. The organization’s cookbook remains a coveted treasure among local activists.

Franny Levine continued to write cookbooks, published locally by Bette Peterson’s Poppy Lane Books. The cookbooks introduced readers to recipes from Spain, Italy, Hungary and parts of Africa and Australia. Each of them — including her most beloved, a two-part set on soups and salads — included wry, funny instructions penned by Franny.

Mark Levine said his mother was an insatiable cook. Franny’s experimentation in the kitchen often included fresh vegetables from their expansive backyard garden and ingredients from local markets and shops. In both Fresno and Brooklyn, she served as host to many big gatherings, which often included Phil’s poet contemporaries and former students.

Franny Levine’s warmth touched everyone she met, according to Fresno State English professor Steven Church. In an essay published in the anthology “The Kiss: Intimacies from Writers,” Church wrote:

“When she greets you, Franny Levine, a small woman with an impossibly bright smile and soft eyes magnified by her glasses, will reach up to you and cup your face in her hands; she’ll hold you there, look you in the eye, never blinking, and kiss you square on your lips or maybe on the side of your face, keeping you in her embrace for a second or two — and this small gesture, this mark is filled with more kindness and love than most people get in a day or a week or a month. This is no coldly formal European side-kiss. This is something bigger, deeper, the difference between a fountain and a well. She will reach out, bridging the abyss between any two humans, and offer this kiss, this true gift, this brief meeting of spheres, and you’ll feel like a balloon being inflated, and believe quite suddenly in the possibility of grace.”

She was preceded in death by her parents, husband and sister, Margaret Moeller.

A memorial service will be announced in the fall. In lieu of flowers, the family requests memorial tributes be made to the Fresno State English Department in honor of Frances Levine. Checks can be made to the Fresno State Foundation, with “Philip Levine Scholarship” in the memo, and mailed to 5245 N. Backer Ave., PB98, Fresno, CA 93740. For questions about donations, call 559.278.1569.

My surprisingly great weekend in Sacramento