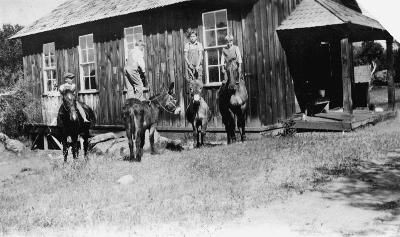 For The Madera Tribune

Green School, shown here in 1895, was one of the 27 school districts in operation when Madera County was carved out of Fresno County. Green School was located in the vicinity of Black Hawk Lodge just off present day Highway 41.

When they carved Madera County out of Fresno County, the newspapers of Fresno never failed to take pot shots at its new neighbor to the north. In 1893, the public tone in Fresno turned blatantly sarcastic. “How dare these ingrates even propose leaving the nurturing arms of Fresno!”

An excellent example of these journalistic sour grapes appeared in May of 1893. No sooner had the last vote been counted than a headline in the Fresno paper attempted to put Madera County residents in their place. In an article entitled “Madera County’s Little Slice of Schools,” the writer picked up his condescending pen and proclaimed that Fresno County would no longer pay for education north of the San Joaquin River.

Continuing his pejorative broadside, the reporter pointed out that “the schools on the north side of the river in the new county of Madera will henceforth and forever have to stand or fall alone, without any support from this side (south) of the San Joaquin.”

At that time, there were 27 school districts in Madera County. The largest was Madera, with its two elementary schools, a new high school, and 444 students. The smallest was San Joaquin School District with 9 pupils. In between, there were one-school districts like Arcola (52 students), Berenda (62), Raymond (60), and La Vina (51).

The Fresno Expositor asserted that education north of the San Joaquin almost paled into insignificance when the student count of both counties were compared. While Fresno County was busy educating 7,170 students, Madera County’s pupils numbered a paltry 1,356.

The underlying inference was that the residents of Madera County had been precipitate in separating from Fresno County and would have quite a struggle reaching the intellectual heights that had been attained in schools south of the river.

In the mind of the Expositor’s editor, not only did sheer numbers relegate Madera County to second class status; so did its presumed dependence upon Fresno County for part of its educational expenses.

TJ Kirk, Fresno County Superintendent of Schools, stated that since “no further connection in educational matters existed between the two counties,” the teachers of Madera County would have to look to their own side of the river for their pay.

The matter of county division had been thoroughly explored, and Madera County’s ability to maintain financial self-sufficiency had been well established before the issue was ever submitted to the State Legislature.

When it became obvious that the creation of a new county was inevitable, Hawkins threw his hat into the race for the top school position in Madera County. With the affirmative vote for county division came Hawkins’ election as Superintendent.

The Fresnoites were quick to point out that Hawkins would suffer a significant reduction in salary. By taking the helm of education in Madera County, he would earn only $500 per year.

The newspaper, however, sarcastically reminded its readers that Hawkins could hold a teaching position concurrently with his tenure as Superintendent, suggesting that he could perform his administrative duties on Saturday. The record does not show that Hawkins ever had to teach school to supplement his superintendent’s salary.

In time, Madera County schools came to be recognized as fully equal to those of Fresno County, and today there is considerable pedagogical cooperation among the schools, proving once again that if the politicians will just take their hands off of education, everything will eventually work .