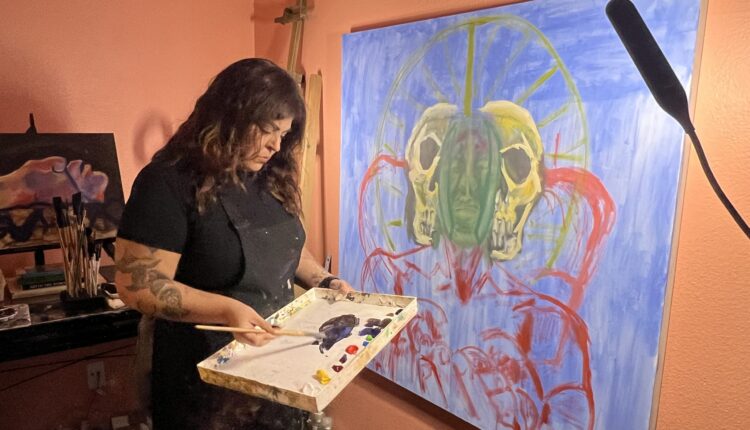 When walking into local artist Veronica Garcia’s apartment, visitors are greeted by her two cats and a massive art display.

An easel next to Garcia’s most recent piece is surrounded by multicolored paints, brushes and books. “Art of the Andes: From Chavín to Inca” by Rebecca Stone-Miller, “The Maya” by Michael D. Coe and several Stephen Houston novels are just a few of the books that take up space next to Garcia’s oil paints.

As a third-generation Mexican art student, born and raised in Fresno, Garcia’s roots trace back to where her grandfathers from both sides of her family were born.

A deep connection to this culture, and an even deeper connection to strength, resilience and creativity, is what inspires Garcia’s art pieces.

She began to draw, paint and create as a little girl who grew up with two brothers and wasn’t included in the same activities as the boys.

“I did my own thing. Drawing and painting and making bowls out of the mud in my backyard was just something that came naturally to me,” she said. “I just started doing things with my hands and it was very organic to me.”

Garcia, now a senior at Fresno State, uses oil on canvas for most of her art, a medium she didn’t use until last year.

Each piece of art she creates is a form of therapy and a release from life’s most heartbreaking events, according to Garcia.

“My art is very emotionally driven. It’s very connected with my life experience, and it’s very personal,” she said.

“The Patriarch,” a self-portrait depicting Garcia holding the head of her abuser, is a piece she takes most pride in due to the response and support she has received regarding it.

“The Patriarch” (A Dishonorable Mention) 2022, oil on canvas, is a self-portrait of Garcia holding the head of her abuser.

Veronica Garcia, The Patriarch (A Dishonorable Mention.) 2022. Oil on canvas.

When Garcia was a young girl, she was sexually abused by her grandfather for many years.

“It’s a circumstance that unfortunately is a pandemic of its own, where trusted individuals abuse young girls in the family,” Garcia said. “When it’s someone who is so powerful within the family, someone that is perceived as this hero or [as] untouchable, and then when someone in the family is abused by that person, it’s such a difficult position to be in because you are basically groomed to really love this person.”

When Garica began to tell her family about the abuse she had been experiencing, she was angry and hurt by how some responded.

“Not everyone, but certain people in my family chose to continue to have a relationship with this person and to continue to praise him,” Garcia said.

This added to her anger. This anger transformed into spite.

“To be violated by a person that everyone loves and adores, but he’s doing these things to you that you know are not good; and he’s crossed multiple boundaries and he was a very special person to you as a child; when these boundaries are violated, it can be a very scary place to be,” Garcia said.

She said art and receiving therapy at Fresno State is what started her healing process.

“I was able to go through these motions of healing, and stand in my own power and expose this person…And instead of feeding that anger, I decided to utilize it in a way that would contribute to my healing so that I could close that chapter [of my life],” Garcia said.

For Garcia, exposing and sharing this experience with the world through her art meant being able to not only help herself but others as well. She emphasized the courage it took her to paint “The Patriarch” in particular.

“I am 100% someone that was born with the courage to ruffle feathers, but this trauma took way more courage than I thought I ever had,” Garcia said. “I was preparing for an army to come for me, but I did it anyway, and it was all worth it.”

“The Patriarch” was an advanced painting class assignment in which Garcia had to find an older masterpiece and use the content to make her own version.

Garcia chose to use the biblical story of Judith and the Head of Holofernes as the inspiration behind “The Patriarch.”

Shortly after posting and sharing her piece with social media and family, Garcia received an outpouring of support.

“I had messages from other women who had similar experiences and messages from younger cousins ​​who said they were so proud of me, and that, ‘I’m so glad you could be a role model for my sister.’ And that was one of the reasons I had to do this,” Garcia said.

Garcia is no stranger to overcoming traumatic experiences and obstacles. Prior to painting “The Patriarch,” Garcia created “Loss,” an oil painting on canvas.

Garcia was diagnosed with endometrial uterine cancer a few years ago. It was a period of Garcia’s life that she described as full of pain, hospital visits and loss.

Due to the severity of her cancer, Garcia had to have a full hysterectomy, a surgery that removed her uterus and ovaries.

“When I was diagnosed, my oncologist said [that] the only treatment is a hysterectomy and I was like, ‘OK, yeah, let’s do it.’ But I didn’t grasp the fact that I wasn’t going to be able to have kids at that moment,” Garcia said. “When that choice is taken away from you, it’s so permanent.”

After she recovered from the surgery, and the pain had faded, the reality of no longer being able to have kids set in. It was a moment she describes as “a bad dream.”

To heal and process this life-changing event, Garcia began to paint “Loss.”

“Loss” is an oil painting on canvas, featuring half of an open pomegranate with a fetus in the middle next to a vaginal speculum.

Through Garcia’s own research, she found that pomegranates have cultural symbolism for fertility and a uterus.

Garcia used pomegranates as a symbol for her own uterus in multiple paintings, including “Loss.”

The speculum in “Loss” represents the pain Garcia experienced during several exams and biopsies.

“Those instruments that are used when we have our pap smears and other exams are painful,” Garcia said. “One biopsy was extremely traumatic. I later found out I wasn’t given any type of pain relief. I felt everything, and I remember wanting to pass out.”

The pomegranate juice in the painting portrays the blood loss Garcia recalled experiencing throughout her battle with cancer.

“They leave you in a room [afterward] to get dressed, and they left all of the instruments out, and it was like a murder scene,” Garcia said. “I used that imagery to show people just how raw going through something like this is.”

Despite losing all of her reproductive organs, Garcia says she now feels more like a woman than ever before.

“Even though it was very heartbreaking to not be able to carry a child, it was at the same time very liberating to not have the pressure to have children; and I felt that I could really be a sensual, powerful woman when I removed those organs because they caused me so much pain,” Garcia said.

A source of light during difficult times like that in Garcia’s life has been her niece, Xiomara.

This is shown through a painting titled “Dissipating,” which features charcoal, oil pastels and pencil on paper.

“I used her image and a scene from one of my hospital visits, with pomegranates on the ground, and then I had Xiomara holding a watering can and diluting the pain,” Garcia said.

“Dissipating” features one of Garcia’s favorite mediums to use which is charcoal.

“There’s something about charcoal, the deep, dark black is just so beautiful to me. The way you can manipulate it to be very dark or very light, and the fact that it’s just from the earth and you can do so much with it, [is beautiful].” Garcia said.

Garcia hopes her art connects and resonates with people in a way that encourages them to do something bold. There were points in Garcia’s life when she felt stagnant, and painting helped her see other opportunities. She hopes others could experience the same.

“We all have these very different lives, but yet very similar lives, and we need each other way more than we like to believe,” Garcia said.

The organic and wholesome parts of life are what is most important to Garcia, and art is one of those things.

She explained that art has been used since the beginning of time and by her ancestors, and said she hopes it never becomes a lost practice.

“We are all creators. You might think that you are not, but we all are,” Garcia said.

As Garcia gets closer to graduation next semester, she is preparing for the next chapter in her life, and a love for her community is what may lead her to her next creative venture.

“I really want to try to teach classes on my own, not under a school district or anything, but to do something where I am my own boss because I work better that way,” Garcia said. “I lived so long for other people. I’m such a different person now, and I can’t go backwards.”

After overcoming and sharing such traumatic life events, Garcia said she now feels more powerful and alive than ever before.

“It’s scary, but it feels so good after,” Garcia said. “This is the first time in my life that I feel completely free.”

Cleanup underway at Tanzanite Park in Sacramento for diesel spill