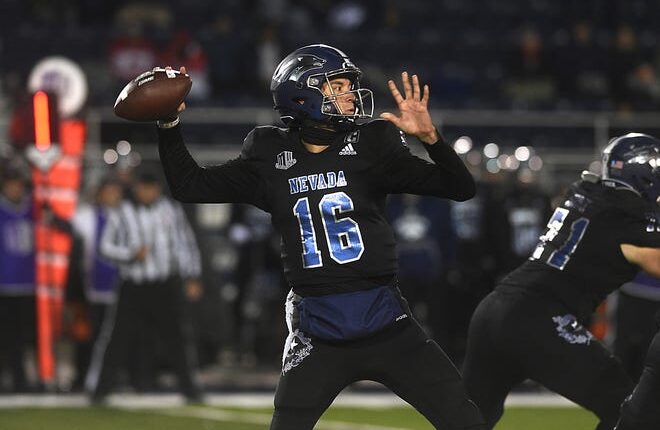 Fresno State picked up where Boise State left off. In Nevada football’s final home game of the season, the defense allowed 41 points for the second-straight game and the offense couldn’t keep up, leaving Nevada on the wrong end of a 41- 14 blowout.

Since senior quarterback Jake Haener came back from injury four weeks ago, the Fresno State offense has been a well-oiled machine. Haener continued his roll Saturday, finishing 29-for-42 for 361 yards and two touchdowns while adding two touchdowns on the ground.

In his last four starts, Haener has thrown for 1,395 yards, 12 touchdowns and two interceptions while also completing 77 percent of his passes.

The Bulldogs’ offense was lethal Saturday, putting up 524 total yards, 361 yards passing, and 163 yards rushing. They averaged 4.9 yards per carry, 8.6 yards per catch, went 8-for-15 on third down, and dominated time of possession by nearly nine minutes.

The Bulldogs scored on four of their first five drives of the first half to go up 24-0 at halftime. After being held to a field goal in the third quarter, Fresno State added two touchdowns on back-to-back drives to put the game on ice.

Fresno State running back Jordan Mims ran for 156 yards and a touchdown on a whopping 8.6 yards per carry. Receiver Jalen Moreno-Cropper hauled in seven catches for 136 yards on 19.4 yards per catch.

Nate Cox gets the start for the pack

Nevada’s game of quarterback musical chairs continued Saturday with fifth-year senior Nate Cox getting the start over redshirt sophomore Shane Illingworth. The results were mixed, with Cox going 16-for-38 for 243 yards, two touchdowns, and two interceptions through the air while adding 10 carries for 56 yards and a lost fumble on the ground.

The highlight of the game was a deep pass from Cox to junior Dalevon Campbell for a 73-yard touchdown. When Campbell made the catch, he got a little help when the Fresno defender ran into the referee, which gave Campbell enough space to run in for the score.

For the season, Cox has thrown for 1,188 yards with four touchdowns and three interceptions with a 51 percent completion percentage while rushing for 242 yards and three touchdowns.

Fresno State defensive end David Perales made his case for Mountain West defensive player of the year Saturday, making life miserable for Cox and the Nevada offense all night. Perales’ play of the game came when he picked off Cox’s pass and took it 21 yards.

He finished with six tackles, a sack, two tackles for loss, one pass deflection, and three quarterback hurries.

Nevada made history Saturday night, and not the good kind. The 2022 rendition of Nevada football is the first Nevada team to lose nine straight games since 1964, a program record.

Fifth-year senior running back Toa Taua’s 93 yards rushing against Fresno State were enough to vault him to sixth all-time in Nevada rushing yards with 3853.

He’s 147 yards shy of being the sixth Nevada ball carrier to rush for 4000 career yards.

UNLV lost at Hawaii on Saturday night for its sixth straight defeat. The loss eliminated the Rebels from bowl contention.

Boise State will host Fresno State in the 2022 Mountain West Football Championship Game, on Saturday, Dec. 3, at Albertsons Stadium in Boise, Idaho. Kickoff is set for 1 pm and the game will be televised on FOX for the third consecutive year.

The Broncos are 7-0 in MW play and own the head-to-head tiebreaker over the Bulldogs if the two teams finish the regular season with identical Conference win percentages.

The Broncos and Bulldogs have met on three previous occasions in the MW Football Championship Game, with Boise State owning a 2-1 advantage.

Here are the holiday donations Sacramento food banks are asking for