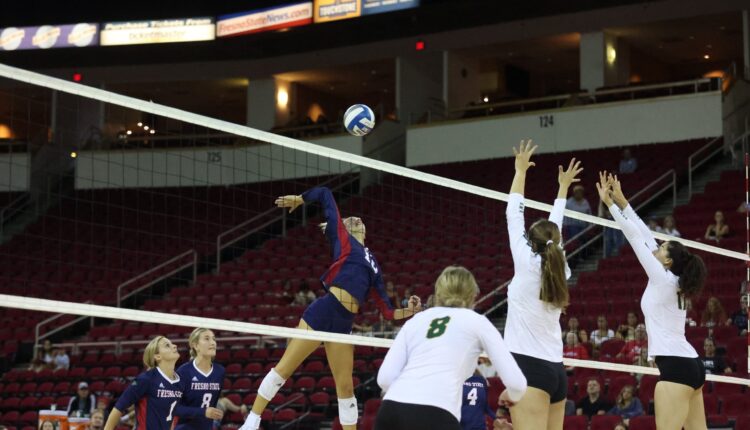 The Bulldogs faced the Seattle Redhawks on Friday morning, the Louisiana Tech Bulldogs on Friday night and the San Francisco Dons on Saturday afternoon. The ‘Dogs took the first two matches from the Redhawks 3-0 and Louisiana Tech 3-1, before dropping their third match to the Dons 3-2.

“Preseason is always a gamble of figuring things out, you just hope you figure it out faster than the other team,” Wright said.

The ‘Dogs took down the Redhawks without much drama, winning all three sets by six or more points. Rud and senior middle blocker Grace Doyle led the way with 15 and 12 kills respectively.

The battle of the Bulldogs started off strong with both teams winning a set. Fresno State was propelled by five service errors from Louisiana Tech to win the first set by two points.

The second set looked like it was headed towards another tight finish, as the score was knotted at 11 apiece. A 9-2 run by Louisiana Tech gave them a 20-13 lead which was enough of a lead to withstand a late 5-1 Fresno State push.

After losing the second set, Fresno State comfortably won the third and fourth set,never trailing in points in either. Rud and Doyle built off their strong first match by tallying a combined 37 kills, five less than Louisiana Tech had as a team.

Olivia Keller and Kasey Purry attempt to block Louisiana Tech’s spike in their match on Sept 2, 2022, at the Save Mart Center. (Marcos Acosta/ The Collegian)

Both Fresno State and San Francisco came into the third contest at 2-0. The match lived up to the hype, as all five sets were decided by three points or less, and four sets were determined by just two.

The second set was a back and forth contest, with the biggest lead by either team being three points. Facing set point down 24-23, the Bulldogs scored three consecutive points to take the second set 26-24.

Despite never having the lead in the third set, the ‘Dogs kept it competitive, coming back from a six point deficit to lose by only two points. The fourth set saw the roles reversed.

A kill by freshman middle blocker Addison Haluska leveled the score at 21. The Dons made two errors as the Bulldogs closed out the set on a 5-1 run to take the fourth set 25-22, forcing a decisive fifth set.

They fell behind early and were never able to take the lead back from San Francisco, falling 15-13 in the fifth and final set.

Fresno State’s Grace Doyle spikes the ball in the match against Louisiana Tech on Sept 2, 2022, at the Save Mart Center. (Marcos Acosta/ The Collegian)

“We focus a lot on culture as a program. This group really loves each other, and we’ll get out there and win the next one,” Rud said.

Wright joined the Fresno State coaching staff as an assistant coach in February.

“They’ve been really gracious with me. It’s a learning experience for everybody, and it’s made me a better coach,” Wright said.

With the 2-1 weekend, the ‘Dogs improved to 3-3 on the young season. They will now continue their pre-Mountain West schedule as they travel to the Bay Area for the Santa Clara Tournament where they will face Tulane (3-3), Santa Clara (3-3) and Oklahoma (4-2).

Sydney Gazzaniga saves the ball from touching the court in the match against the University of San Francisco on Sept 3, 2022, at the Save Mart Center. (Marcos Acosta/ The Collegian)