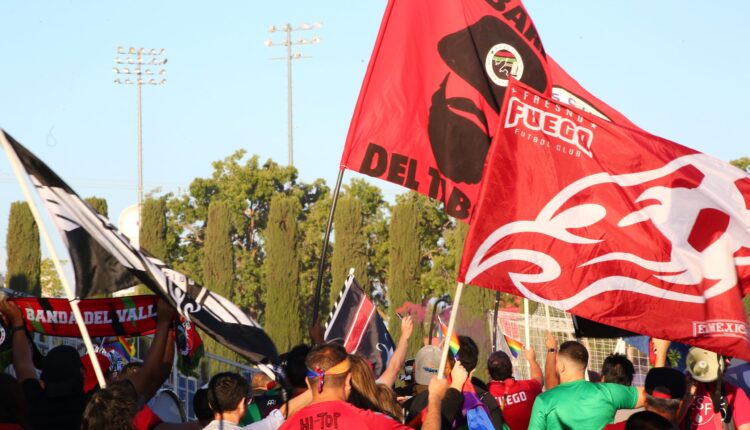 Presented in association with Fresno State’s Rainbow Alumnx and Allies Club, the event featured a raffle for a “Forever Proud Fuego FC” jersey to raise funds for student scholarships, which was given away by Fresno Mayor Jerry Dyer. Pride flags were given to attendees and used to decorate the stadium.

Attendees of the Pride Night game pose for a picture. (Manuel Hernandez/The Collegian)

Fuego FC, who recently topped the USL League One’s power rankings at the beginning of June, kept the pressure on Tucson throughout the first half, but were scoreless by halftime.

Bulgarian-born forward Villyan Bijev, Fuego FC’s top scorer according to ESPN, came close to ending the drought in the 70th minute, but his shot went above the crossbar instead. Another attempt 13 minutes later was just outside.

Villjan Bijev after his attempt to break the tie went over the crossbar. (Manuel Hernandez/The Collegian)

Other attempts to score were similarly fruitless, and the game ended scoreless, making their record 3-4-3.

FC Tucson, who came in 2-6-1 and last on the USL League One power rankings, finished with no shots on target while the Fuego finished with two.

The tie continued a season that marked the return of professional soccer to Fresno for the first time since 2019.

Central Valley Fuego FC has hosted matches at the Fresno State Soccer Stadium since May 28, despite previous reports that the club was looking for its own dedicated stadium. Fresno FC, the last professional soccer team in Fresno before the Fuego FC, played at Chukchansi Park.

Fuego FC now have a five-year deal with Fresno State to use the stadium for home games, according to marketing associate Laura Gonzalez.

Smith, who was head coach for Fresno FC prior to its dissolution after the 2019 season, said the “compact and tight” playing field could create a good atmosphere for both players and fans.

“I’m really confident this group will do well, and the fanbase will continue to grow again. There’ll be some exciting times ahead for the Central Valley and for professional soccer here,” Smith said.
The club will be back at Fresno State on Saturday, June 25, hosting North Carolina FC.