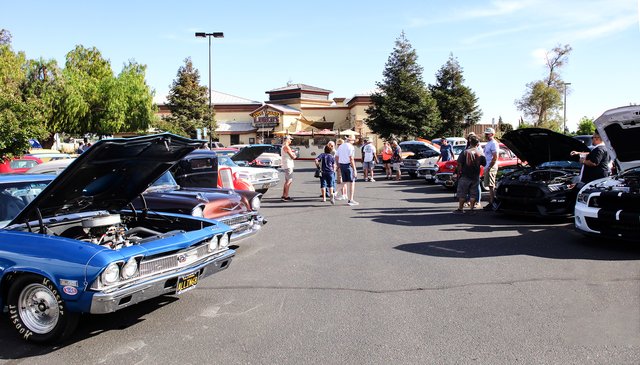 A little bit of the larger Graffiti Week celebration centered primarily in and around Modesto also visited Riverbank last week, as hot rods, classic cars, antique and custom vehicles were on display on Thursday, June 9.

The parking lot between Cool Hand Luke’s and the iMax Theater at the Galaxy Luxury+ complex was filled with all manner of cars, parked in rows easily accessible by the crowd that came to look them over.

Though missing in action during pandemic COVID concerns, Graffiti Week, although mostly a Modesto event, was also enjoyed by some neighboring communities, like Waterford and Riverbank, which offered mini ‘cruise’ events. The main car show was staged this past weekend on the Modesto Junior College West Campus.

Graffiti Week celebrates the film ‘American Graffiti’ by George Lucas, which in turn celebrates his own youth, growing up in Modesto and cruising city streets.

And for those who might have missed it, another car show will be held locally on Saturday, June 25, as another part of the Riverbank Centennial. It’ll be staged in the area surrounding Plaza del Rio Park, from 11 am to 3 pm

Participants will enjoy a live band, a free picnic, and cars from through the decades. And there will also be a beer garden.

City officials note that anyone who wishes to enter a vehicle, or just needs more information, can contact Gaby Hernandez at City Hall, at 209-863-7122, or at [email protected]

Former Ceres man gets star on Graffiti Walk of Fame

Buy and Bust: When Private Equity Comes for Rural Hospitals