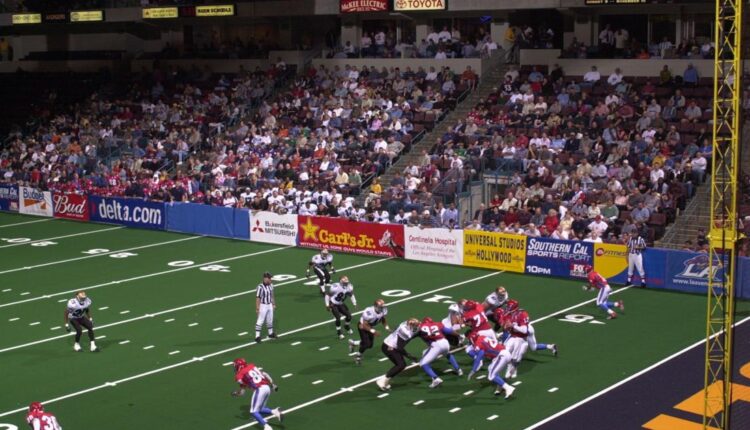 As I was assembling the event calendar for the July issue of Bakersfield Life magazine (which comes out June 25), looking at the entertainment offerings online I stumbled on something that gave me a pause — a two-month gap in pretty much any type of sporting event.

This summer slumber simply got me thinking about Julys past in Bakersfield, and what used to populate the calendar.

Specifically, my mind went to July 21, 2007, the last game the Bakersfield Blitz of the arenafootball2 ever played in the arena.

The Blitz won 50-36 against Stockton that day, behind eight touchdowns from quarterback Chad Elliott, in front of a crowd of 3,455. A few months later, amid financial woes and controversy over multiple players’ criminal offenses, the team faded into oblivion.

All that persists of the Blitz are some faint remnants around the city. For example, Eric Mahanke, the longtime wide receiver who was the replacement offensive coordinator in that game, still owns a gym in town. Interception leader Nathan Munson is a flag football fixture here. The US Army All-Star Bowl — you may remember its previous moniker, the “Blitz Bowl” — played in Mechanics Bank Arena until 2019, but now faces an uncertain future.

Now consider the Spokane Shock. Originating in the same league as the Blitz, operating out of a city with a vastly smaller population than Bakersfield, where Gonzaga is king during the school year, the Shock doggedly persisted. The team outlived not just the af2 but the Arena Football League, jumping to the Indoor Football League, and finally meeting an anticlimactic end this February when it failed to secure the rights to its arena. I wouldn’t be surprised if the Shock rose from the ashes yet again.

Meanwhile, here in Bakersfield, an ever-expanding city that simply cannot get enough football, with one of the state’s most storied junior college football programs, and where it gets unreasonably hot this time of year, we’re entering our 15th straight summer without football in our air-conditioned arena.

Even after a venture called West Coast Arena Football, with a DeVry University partnership and an off-kilter naming scheme (why would you call a Bakersfield team the “Pantheons”? Is there a coffered concrete dome here I’m not aware of?) , wanted to bring the sport to Mechanics Bank Arena this spring. Even as Bakersfield native EJ Johnson of the San Diego Strike Force is leading another arena football team. And even as vastly smaller markets like Northern Arizona — which, by the way, got the Jam of the D-League when it left Bakersfield — field brand-new expansion teams in the IFL, which also includes Bismarck, the Quad Cities and Sioux Falls .

When I spoke to Shane Cadwell, general manager of the Findlay Toyota Center where Northern Arizona plays, this time last year, he pointed out that arenas typically lack programming during this part of the summer, and football fills a hole in their schedule. And so we come full circle.

In fourth grade, I went downtown with some family and friends to an arena football game at the Staples Center, featuring the Los Angeles Avengers of blessed memory. We had won tickets in a charity auction at my elementary school. The team gave out ridiculous fuzzy red mohawks for fans to wear. (At least that’s what I remember. A Google image search for “avengers mohawk” brings up only Jeremy Renner’s ill-advised Ronin hairstyle.) The Avengers’ kicker, coincidentally, was renting a house from my friend’s parents, and so everyone got excited whenever there was a kickoff — very frequently, in arena ball. And the remainder of the game was so fast-paced that even the non-sports fans among us were drawn in, even in as cavernous a facility as Staples. After the game, we got to go down to the field and meet the players, a starstruck moment that cemented the experience in my 10-year-old brain.

Arena football creates a uniquely intimate environment, with fans lining the walls that ring the playing field. The access it allows to the players is unparalleled, a great fit for a city with fans as devoted as Bakersfield’s. And in a city where preps, college sports and the Condors — all of which wrap up by June — take center stage, there remains plenty of space alongside the Train Robbers in the summer schedule. Why don’t we have an IFL team?

Now, I fully understand that the Blitz’s attendance — with an all-time average around 4,000 — wasn’t enough to sustain the team financially in 2007. And that was back when sports teams were having a much easier time getting people off their couches and into stages. (College football attendance just declined for the seventh straight season.) But a new arena football squad wouldn’t even need that much to be firmly in the IFL range. The Strike Force reported figures of 1,026, 1,200 and 1,332 in its last three home games. Northern Arizona has peaked at 2,777 this year, and that was against the in-state Tucson Sugar Skulls.

On that note, a Bakersfield franchise would be able to save plenty of costs on travel and draw fans from across the state. The city is ideally positioned between the San Diego, San Jose and Las Vegas teams — three of the league’s newest as it builds up its western presence.

The presence of professional sports in Bakersfield has dwindled over the years. In the span of a decade the city lost the Blitz, the Brigade, the Jam and the Blaze. The Train Robbers and most recently the Bakersfield Magic have stepped in to shore up the athletic offerings somewhat. But if there’s any sports tradition that needs a revival, it’s football in Mechanics Bank Arena, smack in the middle of that vacant schedule.

Here are things to do this weekend in Northern California