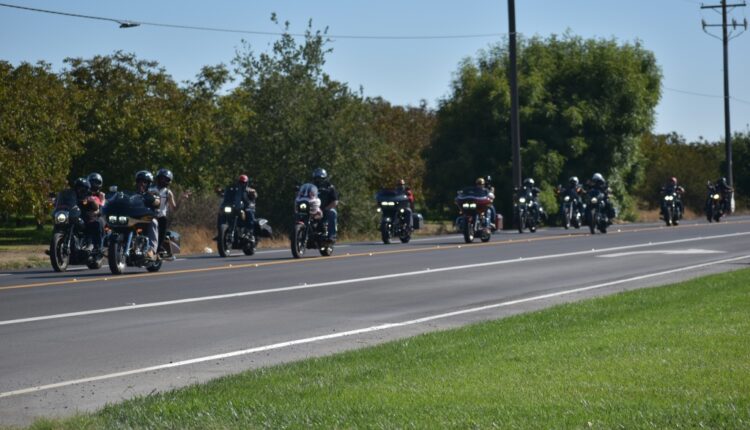 Ralph Hubert “Sonny” Barger, Jr., who authored several books and appeared in “Sons of Anarchy,” was best known as a founding member of the notorious Hells Angels Motorcycle Club.

The Modesto native, 83, died in June in Livermore.

On Saturday morning, the rumble of motorcycles filled the air as hundreds of bikers and other mourners traversed Midway Road to Sacramento Valley National Cemetery in Dixon for Barger’s funeral.

As crisp breezes twirled, the roar of bikes whose riders hailed from throughout California and beyond, overshadowed all other sounds. The short, private ceremony, about 20 minutes long, was conducted in relative silence.

The funeral for Sonny Barger, founder of the Hells Angels, was a private, quiet affair Saturday in Dixon. His Celebration of Life was slated for later that day at Stockton. (Photo, Kimberly K.Fu, The Reporter)

Though some public safety officials had voiced concern about the event, it unfolded without incident.

Following the ceremony, riders headed to Stockton for an afternoon Celebration of Life.

At press time, only minor incidents were reported at the Stockton gathering.

Barger, who served about 14 months in the Army, reportedly took over the Oakland chapter of the Hells Angels in 1957 and built it into one of the biggest and dangerous clubs at the time.

Back in its heyday, the club was known for drugs, firearms and violence, including a beating and fatal stabbing at a 1969 concert at the Altamont Speedway in Alameda County.

Though arrests were made in that case, Barger’s actions were attributed to self defense.