If BT Collins could lead by downing malathion, Sacramento can lead by going 100% green now 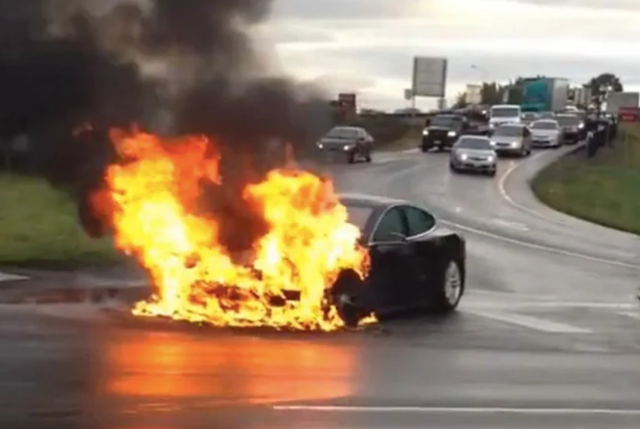 It’s time for Sacramento to put up or shut up.

They can start doing it by putting the State of California at the front of the line to order electric vehicles.

And that goes for every vehicle on elected official drives or rides in conducting official business.

The CHP needs to chauffeur Gov. Gavin Newsom around? Then shed the gas-powered sedans and Chevy Suburbans. Use a Tesla or a Cadillac LYRIQ instead.

And for law enforcement purposes the 2,000 or so patrol units need to be Teslas or Ford Mustang Mach-E vehicles

The Department of Corrections needs to switch to Bluebird electric buses for prisoner transport.

Given there are 625,473 vehicles in California owned by state and other government divisions based on 2020 figures, such a move would increase the number of registered EVs in the Godden State that is now at 425,300 by about 140 percent.

And what better time to do it now when used car prices are at an all-time high.

If California is going to be green, then let Sacramento lead the green charge.

Sacramento does need to simply phase out their gas-powered fleet. They need to lead the way.

That is, unless, this is another French Laundry moment.

You know where the governor and all of the high mucky mucks in Sacramento tell you that you have to do something while they go along doing exactly what they don’t want you to do.

With COVID it was wearing masks. With the green stampede it’s to drive EVs.

Think of BT Collins. He was the former Green Beret registered Republican who served as Jerry Brown’s last chief of staff in his first stint as governor.

When BT Collins was director of the California Conservation Corps, his youthful charges were worried about developing health issues while spraying malathion to stop the Mediterranean fruit fly invasion that was threatening California’s agriculture.

BT Collins stepped up and chug-a-lugged a diluted beaker of it in front of CCC members to prove it was safe.

BT would be the first to give up his gas-powered car to prove that the state edict for EVs was safe, effective and made sense.

It’s funny but given all of the hype about EVs and the state trying to entice people to buy them as well as handing down an edict that fossil fuel powered vehicles are history in terms of new car sales in California after 2023, you’d think the state honchos would be crowing about driving green machines.

Look all you want, but there is no website bragging about the cars taxpayers are underwriting for the use of the 120 legislators being 100 percent EVs. Nor is there any such information out there about constitutional officers or even the governor doing so.

Do you wonder why?

Could there be concerns about range?

Could it be rapid charging instead of overnight charging diminishes the battery’s capacity quicker?

Could there be issues about being sidelined while charging vehicles?

Could there be problems with battery capacity in extreme heat and extreme cold?

These should not be issues given Sacramento waved its magic wand called an “edict” and declared EVs are a go.

It is why you see Caltrans using them in snow country during the winter.

It is why you see the Department of Corrections using them to transport prisoners even though such buses typically only have a range of 120 miles.

The CHP should have no problem using EVs, right? After all, there have been EVs produced that accelerate faster than their gas-powered counterparts.

But what about other aspects of functionality?
Every notice police cars are almost always left running? There are a couple of reasons that. The first and foremost is it takes 10 minutes so to power up much of the electronic equipment needed to do the job that each unit is equipped with.

Then there is the question of officers laden with equipment and bullet-proof vests. Rest assured they have to use the air conditioning more than the average driver.

None of that could possibly be a challenge for an EV and not reduce range, right?

Then there is the issue of who owns EVs.

Forget about them costing more than gas-powered vehicles. That’s not a functionality concern. It’s an affordability issue.

Outside of major cities blessed with extensive public transportation, how many households in the suburbs and the countryside have EVs as their only vehicle?

There is no doubt technology is evolving.

And clearly it is wise to significantly reduce fossil fuel use for a variety of reasons.

But the obsession with 100 percent EVs is a tad reckless.

While hydrogen powered engines show promise, practicality would call for allowing hybrids that are gas powered being sold in new vehicle lineups after 2035.

If for no other reason than safety.

Let’s say there is a major earthquake that knocks out the power grid. A wildfire that puts people without a full charged EV in harm’s way. Perhaps it is fleeting floods.

Yes, those are doomsday scenarios just like the fact there are parts of California where snow not only reduce battery effectiveness but can knock out power for days.

California is basically putting all of its eggs in one basket.

Given the shaking, burning, flooding, and such that we have a lot of isn’t going to go away anytime soon, just how wise is the game plan?

That said, if this is the future, then let Sacramento live it now.

Perhaps the voters can quality a proposition for the 2024 ballot that requires every vehicle used for government business in California by an employee or an elected official must be 100 percent electric by 2026.

To do the same thing for all private vehicles that now number 29.7 million between now and 2035 would take 2.2 million a year being replaced by EVs.

Yes, gas-powered vehicles can be driven after 2035 and resold. It’s just that no new ones can be sold.

Even so, it give you an idea of ​​what Sacramento is expecting to happen in California.

You think they’d be more than thrilled to go 100 percent first to show everyone that it is no more of a threat to your lifestyle and well-being than chug-lugging a beaker of malathion.

But as they say at the French Laundry, let them wear masks.

column is the opinion of editor, Dennis Wyatt, and does not necessarily represent the opinions of The Bulletin or 209 Multimedia. He can be reached at [email protected]

First look at the SJSU Spartans