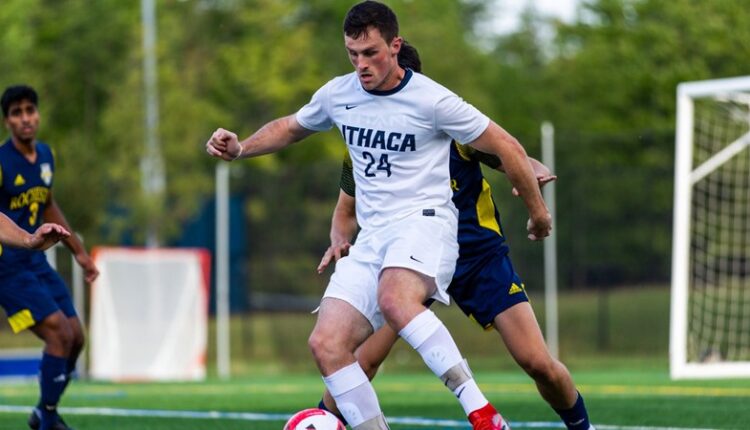 SALEM, Va. – The Ithaca College men’s soccer team returned to action on Saturday afternoon as they dropped their second game of the 2022 season to Stockton University with a score of 2-0 to close out their season-opening weekend.

The Bombers appeared the more dangerous of the programs as they generated eight corner kicks in just the first half, but Stockton managed to keep a clean sheet behind the efforts of their defense and faced senior goalkeeper Ian Brett who made four saves on 11 total shots.

Ithaca dominated play for most of the first half, holding a 6-2 advantage in shot attempts over the Ospreys 6-2, but the Bombers couldn’t find the back of the net.

The Bombers nearly broke through halfway through the first half when Aidan Keenan saw his header trickle into the back of the net, but unfortunately it was called back for offsides.

In the 38th minute, Stockton scored their first of two goals on the day when James McCombs assisted Owen Kitch off a free kick with McCombs heading it down and in to put them up 1-0 just before the halftime break.

The second half was a lot of back-and-forth play, until Stockton doubled their lead off to an Aidan Hoenisch counterattack putting them up 2-0 with a little over 20 minutes to play.

The Bombers had a few more chances to get on the board but just couldn’t manage to put one away. Ithaca outshot the Ospreys by a 11-7 margin as each team placed four shots on target. Junior goalkeeper Ian Whitfield finished with a pair of saves as he played all 90 minutes for the Bombers.

The loss drops Ithaca 0-1-1 and they will be back in action on Friday, September 9 in Rochester, NY for a 7 pm non-conference matchup with St. John Fisher University.