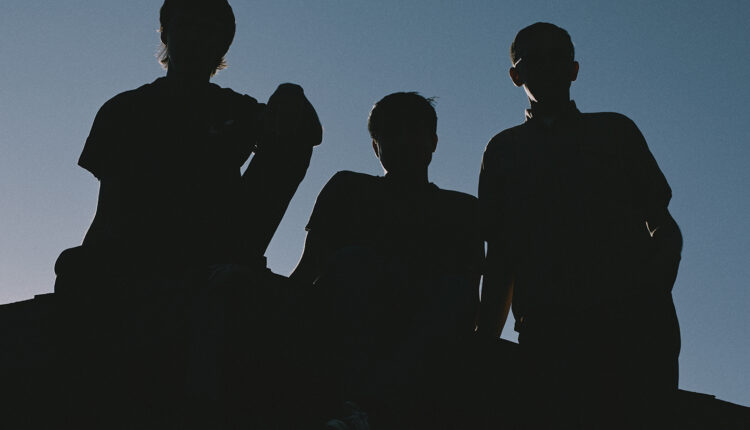 Barry Johnson is apparently MacGyver for power-pop songs. In an interview with Alternative Press last fall, months before it was officially announced, the Joyce Manor singer-songwriter and guitarist compared the creative process for his band’s new album to the Rolling Stones’ Tattoo You, explaining that it was mostly pieced together from scraps of old unfinished songs he had laying around. Speaking to Uproxx more recently, Johnson said the immaculate single “Don’t Try” was “Frankensteined from four songs in the Joyce Manor graveyard.” But as that song suggests, 40 Oz. To Fresno does not play like a makeshift collection of leftovers. It’s another stellar entry in a catalog that has become a model of satisfying consistency.

Not that every Joyce Manor album has been exactly the same, or that their zealous supporters have always been pleased. There have been minor evolutions in style and fidelity over the years, each change exhaustively litigated by the band’s fan base. Joyce Manor’s Tumblr-revered 2011 debut was Cali pop-punk crossbred with ripshit lo-fi indie rock, spiked with traces of the Smiths, the Thermals, and especially early Weezer. They reacted to that record’s success with the scattershot and self-consciously challenging Of All The Things I Will Grow Tired Soon. Upon signing to Epitaph they got back to crowd-pleasing with the artfully revved-up Never Hungover Again. And though some fans thought Cody leaned too hard into the post-grunge side of their sound — the latent Third Eye Blind and Everclear influence they picked up on KROQ alongside Green Day and blink-182 — it was just as much a step toward the Britpop and power-pop aesthetics that manifested more clearly on 2018’s Million Dollars To Kill Me.

In hindsight, it feels like a pretty clear progression, a process of refinement more than reinvention. If Joyce Manor’s self-titled album was their admitted attempt at Pinkerton-style abrasion, a decade later they’ve settled into an extended “Green Album” era, cranking out endless variations on well-crafted guitar-pop. In theory this should be a problem because Pinkerton rules whereas “The Green Album” is the sound of Rivers Cuomo hedging his bets, draining the personality out of his music, and ending up with a sterilized zombie version of Weezer. But Joyce Manor do the “Green Album” sound so much better than Weezer ever did. At his tamest, Johnson still howls his songs with grit and conviction, and his bandmates play even the most radio-ready tracks with an anxious vigor. They’re starting to seem like the emo revival’s answer to Spoon: a hooky, straightforward rock band that can’t seem to miss, with a signature touch you can’t mistake no matter how much they tweak the details.

Despite its Sublime-referencing title, 40 Oz. To Fresno presents a band just as indebted to Scottish power-pop greats Teenage Fanclub, who got their own nod from Joyce Manor on the 2020 rarities collection Songs From Northern Torrance. The band once again worked with Cody producer Rob Schnapf, a guy known for his work with Beck and Elliott Smith but also Guided By Voices, Joyce Manor’s predecessors in short, sweet guitar bangers that thrive in any fidelity. Motion City Soundtrack’s Tony Thaxton is the latest to ably take over the drummer’s stool. Rory Allen Phillips (of ska-punks the Impossibles and pop-rockers the Stereo) co-wrote a couple tracks, including one with Johnson favorite Katy Davidson of Dear Nora. Perhaps owing to the patchwork composition style or Johnson’s desire to make a weirder Joyce Manor album, there are some sonic outliers — yes, even on a 17-minute album — but it all holds together thanks to constants like Johnson’s contagious harmonies with bassist Alex Ebert and similarly engaging lead lines from guitarist Chase Knobbe, who makes brilliantly subtle use of his pedalboard.

The album shows off its range right away. First comes a majestically chugging cover of OMD’s 1981 new wave hit “Souvenir,” Knobbe’s high-pitched guitar part doubled by keyboard as they soar above the clamor. Then it’s on to the tightly wound, breathlessly scraping “NBTSA,” a song that maintains the energy of its original four-track recording from half a decade ago. Although the title is an acronym for “Never Be The Same Again,” more than most current Joyce Manor songs “NBTSA” calls back to the ragtag spirit of their debut. Soon “Reason To Believe” is rolling out jangly arpeggios worthy of Gin Blossoms and “You’re Not Famous Anymore” is bouncing along with a shaggy two-chord riff a la “Should I Stay Or Should I Go,” topping it off with slicing lead guitar. That last one is a mean-spirited dig at an unnamed washed-up indie-rock celebrity: “You were a child star on methamphetamines/ Now who knows what you are, ’cause you’re not anything.” Yet, somehow compared to spiteful oldies like “Call Out,” the song makes schadenfreude feel like good clean fun.

Up to that point 40 Oz. To Fresno is a winner — relentlessly catchy, holding power and finesse expertly in balance — but things shift into overdrive with “Don’t Try,” one of the finest guitar-pop songs in recent memory. Musically, it’s such a tight little machine, its propulsive, understated verses giving way to a gorgeously streamlined chorus, accented just so by Schnapf’s guitar on the middle eight. Lyrically, it’s a genius poem, as minimal as the sonic architecture and just as effective. I love how the first verse keeps zooming in from a bird’s-eye view until it’s all the way inside a human body: “In your town, on your street, in each room of your house/ In your bones and your teeth, you’ re so tired you can’t sleep.” I love how much information is provided, and how much is left unsaid, in verse two: “In your car, the backseat, the stale taste, the dry heat/ We might live, we might die, you can’t win, so don’t try.” I especially love how the economical storytelling resolves into the most brilliantly simple refrain: “Sometimes I feel so far away/ I missed you so much today.” I could listen to those 101 seconds over and over. I do listen to them over and over.

And yet just as often the momentum carries me forward into 40 Oz. To Fresno’s other monster single. “Gotta Let It Go,” sort of a post-hardcore “When I Come Around,” rides its central low-end riff and power chords as wide as the sky all the way to Johnson’s fiercely barked bridge — the album’s climactic peak, it’s like a shouting match breaking out in the middle of a fireworks display. The tracklist is falling action from there, but not because any of the remaining songs are stinkers. “Dance With Me” shows off Johnson’s ability to cram vivid description into basic love-song tropes: “We’re on a burning planet, but upon it there is magic/ If you reach out you can grab it, but you always seem to panic.” (He also slides in a reference to Frightened Rabbit and rhymes “stealing shit from Best Buy” with “tearing out my heart for the sound guy.”) “Did You Ever Know?” conjures more lovelorn nostalgia in 90 seconds than most movies manage in 90 minutes. It all ends with “Secret Sisters,” a towering, bashed-out throwback to Joyce Manor’s early days — and rock ‘n’ roll’s — seemingly conceived under the influence of Weezer’s “Suzanne.”

In that Uproxx interview, Johnson reveals he went back to college during the pandemic and nervously wonders whether there’s any public interest in his band on this side of the decade divide, four years removed from their last album. The same feature finds writer Ian Cohen, a far more studied Joyce Manor scholar than I, suggesting 40 Oz. To Fresno is unlikely to unseat the self-titled or Never Hungover Again in fans’ personal rankings. But speaking as someone who has always appreciated this band more than I’ve loved them, this new album has unlocked something for me. It strikes me not as the work of a past-their-prime buzz band but a group that is getting better with age, even as they age into a style that doesn’t offer much upward mobility. I don’t know what their commercial prospects are or where they fit into the world going forward, but I can tell you they’ve won themselves at least one more diehard fan at this late date. Maybe they can’t win, but I hope they keep trying.

Other albums of note out this week: