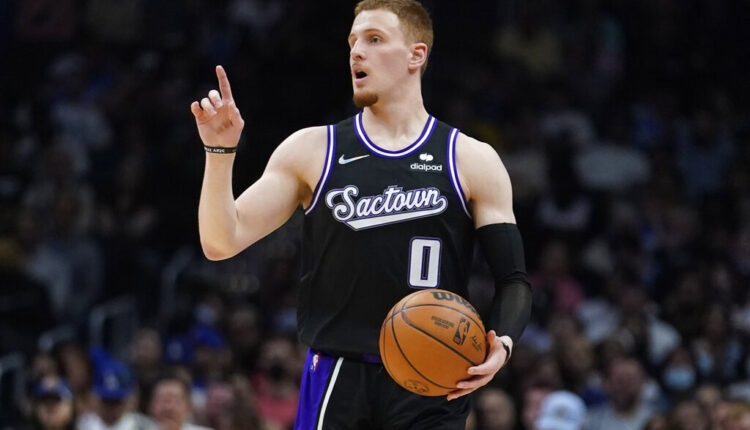 On the eve of what should be a frenzy of free agency activity for teams across the NBA, the Sacramento Kings made several moves to help navigate a busy offseason of their own.

The biggest, and perhaps most surprising decision by the Kings front office on Wednesday, was to decline extending a qualifying offer for guard Donte DiVincenzo, according to multiple sources.

DiVinvenzo, 25, would have been a restricted free agent on July 1, if the Kings extended the qualifying offer worth around $6.6 million. Those sources, speaking to FOX40 on the condition of anonymity because they were not authorized to speak publicly, say that the Kings still have interest in the former Villanova star, but the organization felt the price was too steep.

A salary cap hold of $14 million would have been in place until DiVincenzo signed an offer sheet with another team, if the Kings had extended the qualifying offer to make him a restricted free agent.

As a restricted free agent, Sacramento would have been able to match any offer sheet signed by DiVincenzo to keep him. The Kings could have also worked out a sign and trade possibility with any team he agreed to sign an offer sheet with.

The decision to let DiVincenzo walk makes him an unrestricted free agent.

The Sacramento Kings have declined the qualifying offer for guard Donte DiVincenzo (worth $6.6 million), according to sources. I’m told that the team remains interested in the former Villanova star.

DiVincenzo was acquired by the Kings at February’s trade deadline from the Milwaukee Bucks as part of a four-team deal that shipped Marvin Bagley III to Detroit. He would appear in 25 games with Sacramento, averaging 10.3 points (36% shooting, 37% from 3-point), 4.4 rebounds, 3.6 assists and 1.5 steals per contest.

Chimezie Metu to remain with the Kings

One player to secure a roster spot for the 2022-23 season before the start of free agency was forward Chimezie Metu.

Metu’s $1.9 million deal is now guaranteed for next season, as the Kings chose not to release the 25-year-old, sources said.

Metu, 25, will enter his third season with Sacramento. The former USC star was originally selected by San Antonio with the 49th overall pick in the 2018 NBA Draft. The 6-foot-9 power forward was a starter in 20 of his 60 games last season. He posted career best per game averages of 8.9 points, 5.6 rebounds and 1.0 assist, along with six double-doubles.

The highlight of his 2021-22 season was his buzzer beating three-point bucket to lead the Kings over the Mavericks 95-94 on Dec. 29 at Golden 1 Center.

Neemias Queta to return to Sacramento

Portuguese center Neemias Queta has had his two-way qualifying option picked up by the Sacramento Kings, sources say.

Queta, who will turn 23-years-old next month, split time last season as a two-way player between Sacramento and G League Stockton.

The 39th overall pick from last year’s NBA Draft appears ready to accept the offer from the Kings.

Queta will once again play on the Kings summer league roster and he’s looking forward to defending the Las Vegas championship he helped win last season.

Queta played 14 games with G League Stockton and 14 games with Sacramento. He posted per game averages of 3.2 points, 2.2 rebounds and 0.6 blocks with the Kings, while logging an average of 8.6 minutes per contest. He even made history last season by becoming the first player from Portugal to play in an NBA game.

The Kings have picked up the $2.63 million option on forward Trey Lyles for the 2022-23 season, according to sources.

Lyles, 26, came to the Kings, along with Josh Jackson, from the Pistons in a four-team trade involving Bagley III and DiVincenzo. He appeared in 75 games between both Detroit and Sacramento, averaging 10.5 points, 5.1 rebounds and 1.2 assists per contest.

Lyles’ toughness and ability to stretch the floor were valued by the Kings. He shot 55% from the floor and 32% from distance yet improved his 3-point shooting to 36.5% during his 24 games with Sacramento.

He will be entering his eighth NBA season.

Sacramento Kings summer league roster for this weekend’s California Classic, to be coached by Associate Head Coach Jordi Fernandez.
This roster can change for the Las Vegas Summer League. pic.twitter.com/z5j7io8kVE

The Kings announced their NBA Summer League roster on Wednesday which will compete in the California Classic tipping off on Saturday.

Keon Ellis, who was not selected during last Thursday’s NBA Draft, agreed to a two-way contract with the Kings, where he will split time with G League Stockton.

The California Classic will take place Saturday, Sunday and Tuesday at San Francisco’s Chase Center. The Kings will compete against the Warriors, Lakers and Heat over the course of the three days.