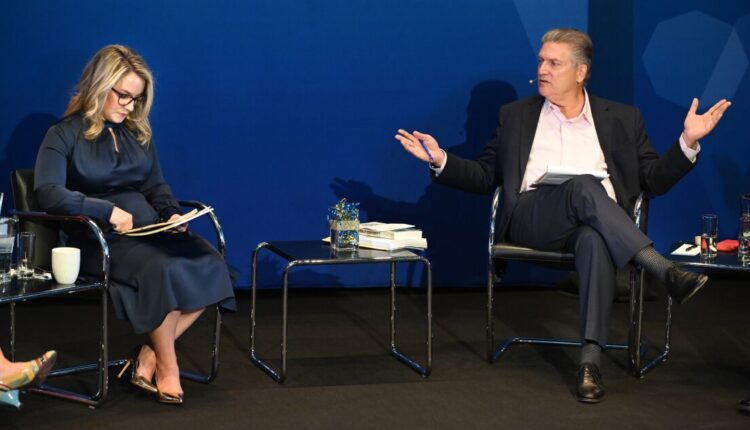 The viewed Hertzberg, 67, sat cross-legged with a pair of 450-page-plus self-published books to his right. One contained a collection of op-ed pieces the self-described “ideas man” has written over the last 20 years, on issues from housing to redistricting.

He read a brief invocation from the Torah about good governance, then showcased a body of legislative work that began in 1996 — the same year Horvath entered high school. Hertzberg, a Van Nuys resident, promised the audience that he would solve problems with big ideas, negotiation and compromise.

When Horvath’s turn came, the 40-year-old Notre Dame graduate and Ohio transplant launched right into her speech. She championed herself as a grass-roots defender of abortion rights, and talked of relying on “21st century solutions” and avoiding “failed policies of the past.”

At stake is Kuehl’s district, with 2.08 million residents. The winner joins a five-member governing body — currently all female — in charge of a nearly $39-billion budget.

The newly configured 3rd District is about 43% white, 37% Latino, 12% Asian and 4% Black. It covers 431 square miles and stretches from the Westside through the San Fernando Valley. December redistricting moved more conservative Valley communities, such as Porter Ranch and Chatsworth, to the 3rd District from the 5th.

Hertzberg, whose Senate district intersects with several District 3 communities, took first in the six-person primary in June, with 31% of the vote, just ahead of Horvath with 28%. Hertzberg also leads in fundraising.

As of Oct. 21, he had raised more than $5 million, including almost $3.5 million from four political action committees, $200,000 from Los Angeles County Firefighters Local 1014, and $858,000 from law enforcement groups, including the Assn. for Los Angeles Deputy Sheriffs.

At that point, Horvath and allies had raised just under $1.5 million, with two political action committees providing $325,000. Some of her biggest donations came from women’s groups, including the Planned Parenthood Advocacy Project of Los Angeles and the Women’s Political Committee, which kicked in $50,000 apiece.

The candidates — both Democrats — have focused on three major themes in their campaign mailers: solving homelessness, protecting reproductive rights and portraying each other as closet Republicans.

In the battle of endorsements, they both have high-profile support.

Hertzberg served in the State Assembly from 1996 to 2002; in his final two years, he was a speaker. He will be termed out this winter, and his 31-year-old son, Daniel, is running to replace him.

On the campaign trail, he touts his $1.2-billion expansion of California’s Cal Grant financial aid program. But another of his signature proposals, which ended cash bail, was overturned by voters in 2020.

But Horvath, “who isn’t as well known,” may be able to turn that to her advantage by framing the race as the “classic case of the outsider versus the insider,” Sragow said.

Within the Westside, Horvath is a familiar entity. She was appointed to the West Hollywood City Council in 2009, served two years and was elected to the council in 2015. She also served 16 months as the city’s mayor, during the pandemic. She was a founding board member of the NoH8 Campaign for gay marriage in 2009.

In this campaign, she had to broaden her appeal. A few months ago, mentions of her connections to West Hollywood, the LGBTQ+ epicenter of Los Angeles, were removed from her website. The erasure irritated some voters.

Horvath has tried to counteract Hertzberg’s name recognition by winning over some of his supporters. The Democratic Party of the San Fernando Valley, which Hertzberg helped found, has endorsed Horvath. Party Chair Sean Rivas called her “a champion of the community and ardent supporter” while labeling Hertzberg “out of touch.”

Hertzberg’s response, in various debates, has been to question Horvath’s experience, pointing to West Hollywood’s small size and population — just 1.9 square miles and roughly 37,000 people — to suggest that Horvath is unprepared for a leadership role in a county that serves almost 10 million residents and has more than 66,000 homeless people, compared with West Hollywood’s tally of 40 or so.

Yet while Hertzberg says his resume gives him “a decided advantage,” he has also faced scrutiny for inappropriate behavior during his career.

In Sacramento, Hertzberg was nicknamed “Huggy Bear” for his unsolicited hugs and was accused of sexual harassment by a former Fresno-area lawmaker. A 2018 Senate investigation cleared him of sexual harassment, but his hugs were considered unwarranted and he was warned to stop.

On Oct. 12, a coalition of female officials and advocacy leaders issued a letter to Hertzberg’s camp, demanding an official apology, disclosure of his sexual harassment training and a listening session with survivors and advocacy groups.

Hertzberg’s camp did not respond, though they did maintain earlier this year that he has “apologized for his actions, learned from his mistakes and did not repeat them.”

For Kuehl, who served in the Assembly with Hertzberg, the coalition’s letter was in line with what she said she “witnessed for years.”

“Bob’s full-body bear hugs were a kind of bullying,” Kuehl contends. “You felt it was something you couldn’t avoid, especially for the young members of the Assembly who didn’t know how to say ‘no.'”

Horvath released a statement condemning the unwanted embraces and said her election would represent “real change.”

She would be the lone millennial and the only renter on the board, if she wins the race. “I’m still paying off my student loans and I know firsthand about affordability issues, rent stabilization and struggling to make it,” Horvath said. “I have these lived experiences that so many others in my generation have and they will guide me.”

Horvath’s most scrutinized move as a politician came in June when she voted to trim one sheriff’s deputy position and add 30 unarmed security ambassadors. The measure passed by a 3-2 vote but was criticized by many residents as a first step toward defunding the police.

The West Hollywood vote occurred as long-running tension between Los Angeles County Sheriff Alex Villanueva and the Board of Supervisors was escalating dramatically.

Villanueva searched Kuehl’s home in September as part of a highly controversial investigation. Two years ago, Kuehl had called for Villanueva’s resignation, and there is an amendment on the ballot in this election that would authorize the board to remove an elected sheriff.

Horvath called out Villanueva at the UCLA candidates’ forum, saying she “would not support the sheriff.” And though Hertzberg called the search of Kuehl’s home by armed deputies “horrible,” he did not take an official position against Villanueva, because he “didn’t see the value in putting a finger in someone’s eye if you have to get up and work with them,” he said.

Horvath considers her denunciation of Villanueva — who is running for reelection — as the type of “executive leadership needed to run the district.” But Hertzberg, the self-avowed conciliator, said Horvath’s move showcased her “my-way-or-the-highway attitude.”

Current West Hollywood Mayor Lauren Meister has endorsed Hertzberg and lauded his stance on public safety, along with “his maturity” and “years of experience.”

But Kuehl, who endorsed Horvath early on, said one “giant advantage” the younger candidate has is her ability to listen. “She doesn’t enter a room thinking she has all the answers,” Kuehl said.

In terms of homelessness, Horvath and Hertzberg appear split on the rights of homeless people and restrictions on sidewalk encampments.

Hertzberg called himself “a strong advocate” of the Los Angeles city ordinance that outlaws obstruction by tents and forbids sleeping on the public right-of-way near schools and other similar facilities. He tied its enforcement to public safety.

Though Horvath did not take a position on the ban, she said the law offers no help for the unhoused. Instead, she singled out for support recent state legislation (SB 679) that will establish a county agency to create and preserve affordable housing and offer aid to struggling renters.

Hertzberg has his own institutional solution in mind. He envisions a pilot program in which the 88 cities within the county would be aligned under a giant operation that he likened to the Metropolitan Transit Authority.

Polling for each camp is predicting a close result. Hertzberg’s poll, based on a survey of 800 likely voters at the end of August, gave him a 7-percentage point advantage, with 47% of voters undecided.

Team Horvath posted a poll on Aug. 22, based on a survey of 538 District 3 residents, that found the pair tied at 23%. A majority of voters were undecided — which means there’s a lot of pavement pounding still to do.