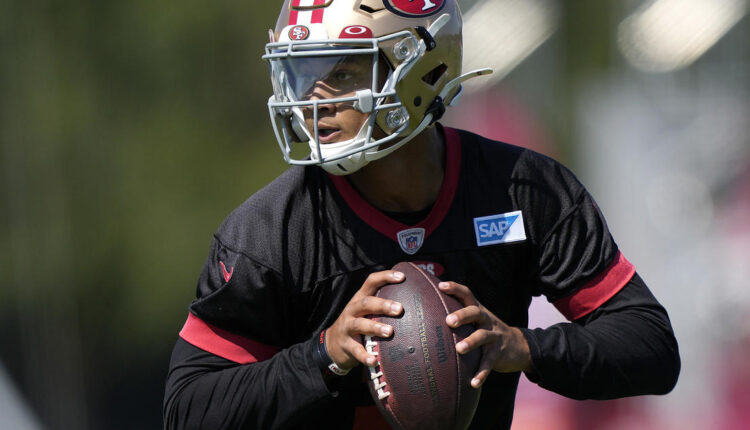 While some people outside the organization may have wondered if the Niners were ready to turn a contender over to an untested, second-year quarterback, Lance had been operating all offseason as the starter.

“Honestly, the only difference is I was hoping you guys would stop asking me about it all the time,” Lance said after practice on Thursday. “But for me, it wasn’t really a moment or anything like that. I’ve been excited. I’ve been prepared. I’ve been preparing to play since the day I got here, the day I got drafted. So , obviously excited for this year but nothing has really changed this whole offseason.”

The Niners have been planning for this ever since trading three first-round picks to draft Lance third overall in 2021.

After having only limited playing time in college at lower-level North Dakota State, Lance spent most of his rookie season on the bench behind starter Jimmy Garoppolo as San Francisco made a run to the NFC title game.

Lance made two starts when Garoppolo was hurt and completed 41 of 71 passes for 603 yards, five TDs and two interceptions, while also running for 168 yards and a score as a rookie.

But he feels far more prepared this season.

“Last year, I was definitely in a different spot mentally, I would say,” he said. “Just feeling a lot more confident this year, coming in, knowing what I’m doing, knowing the offense a lot better, knowing the guys a lot better. And having been around this organization, this coaching staff for a year. I think it’ll be a great thing.”

After a mostly sharp first day of practice, Lance had a tougher time Thursday going up against San Francisco’s talented first-team defense. He completed less than half of his passes in team drills and was picked off by Jimmie Ward.

But Lance said he was pleased with how the offense bounced back from mistakes and he provided a few highlights with a scramble and well-placed pass on a deep out pattern to Brandon Aiyuk.

“We know that our defense is really good, but I mean … one turnover is, is too many,” Lance said. “But just because we have one turnover, I thought we turned the page really well. I thought the next few reps, for all of us, after our turnovers we turned it around really quick, which I think is, is a bigger part than not throwing picks at all.”

While Lance is running the offense for the Niners, Garoppolo is still around. He is doing a throwing program early each day as he works his way back from offseason shoulder surgery, but has not been on the practice field as the Niners try to find a trade partner for their former starter.

Lance said it has been good to see Garoppolo this week after not being together during the offseason program while Garoppolo was rehabilitating in Southern California.

NOTES: WR Deebo Samuel is still not practicing as he works on getting a contract extension with the team. … LT Trent Williams missed his second straight day to attend to a family matter. … DT Arik Armstead missed practice for an undisclosed reason.