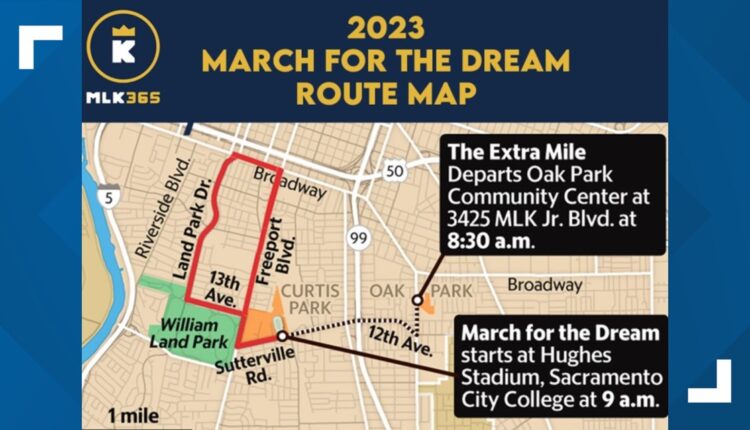 SACRAMENTO, Calif. — With thousands of people expected to march the streets of Sacramento for Martin Luther King Jr. Day Monday, many roads in downtown will be closed for the day’s events.

March For The Dream kicks off at 8:30 am at the Oak Park Community Center on 3425 Martin Luther King Jr. Blvd.

Community leaders and residents will gather for an early ceremony at the start of the march before heading to Sacramento City College on 3835 Freeport Blvd. at 9 am

Street closures will occur along the following:

The North Area March, sponsored by the Roberts Family Development Center, kicks off 10 am at Grant Union High School on 1400 Grand Ave. The march starts at 9:30 am and is expected to end at noon for a business and resource fair.

Street closures will occur during the march at the following locations:

The MLK Jr. Day Freedom Caravan and Wellness Fair will start at 7000 Franklin Blvd., Suite 1000 with the caravan parade beginning at 10 am