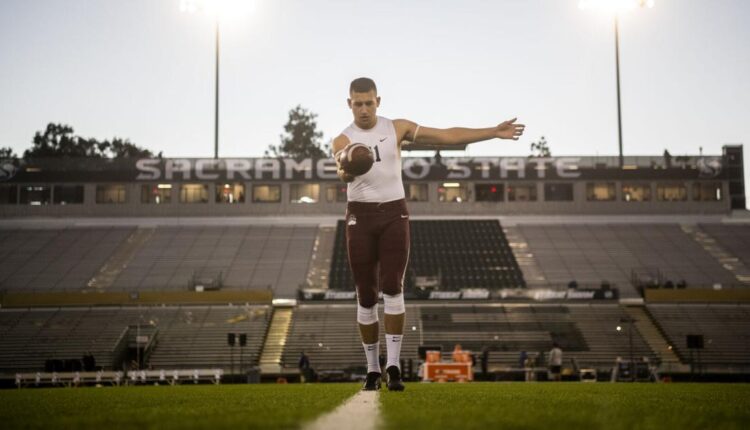 SACRAMENTO – The No. 7 Montana Grizzlies travel to Sacramento on Saturday to take on the undefeated No. 2-ranked Sacramento State Hornets.

UM dominates the all-time series 20-3, but they’ve lost the last two (2019 and 2021) and this weekend’s contest comes with what feels like the most at stake in a long time for the Griz.

Griz win the toss and defer.

The Hornets, who haven’t trailed a game all year, will start on offense.

Sac State now trails for the first time in the 2022 season. From two yards out, Marcus Knight caps off a 15-play, 88-yard drive and Montana is up early.

QB Lucas Johnson had three third-down conversions on the ground. Looking much healthier than he did over the past two contests.

That is the first quarter this season that the Hornets have been held scoreless. They had some self-inflicted harm with four penalties on offense that quarter.

The home team will open the second quarter facing a fourth-and-eight.

Sac State QB Jake Dunniway throws up a wobbly pass after just connecting a long pass with Carlos Hill the play before.

Corbin Walker comes down with it and takes it to midfield where the Griz takeover.

Backup QB Kris Brown is up to 0/5 passing and he just threw a hospital ball to Malik Flowers over the middle. He was hit hard and dropped it.

Nico Ramos comes on for a 45-yarder and gets it blocked by nickelback Marte Mapu.

Of course, it’s Patrick O’Connell. On a pitch play, the ball squirts loose and the linebacker jumps on it. Montana takes over deep in Hornets territory.

It’s not a touchdown but a 37-yard Nico Ramos field goal puts Montana up two possessions, 10-0. No problem on this attempt after getting a 45-yarder blocked earlier.

It was only a matter of time with this electric Sac State offense and they are on the board. Tight end Marshel Martin reels in his team-leading sixth touchdown of the season on the pass from Dunniway.

Lucas Semb is the Griz football beat writer for the Missoulian. Follow him on Twitter @Lucas_Semb or email him at [email protected]