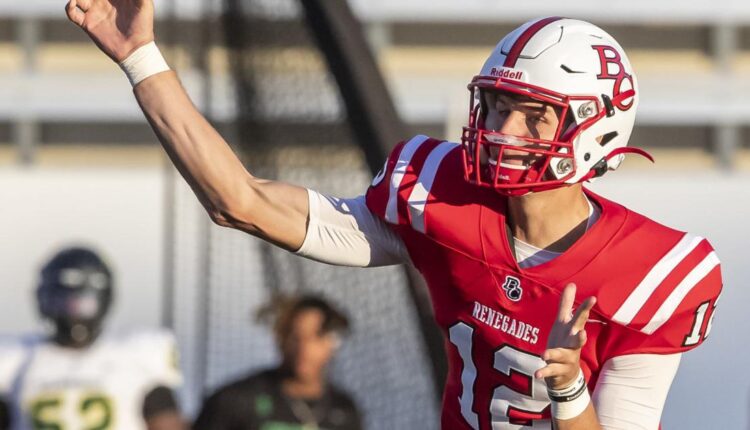 When Braden Wingle finished his high school football career, it was November 2017. He was already a year removed from setting the CIF Central Section passing record for Bakersfield Christian as a junior and had wrapped up a decorated career with the Eagles.

“It all hit me really quick that college is right around the corner,” he told The Californian that December, upon accepting an invitation to an all-star game in Texas. “I have to find my school.”

Four years and three colleges later — still with three years of eligibility remaining — it seems he finally has. The quarterback announced his commitment to Fort Lewis College in Durango, Colo., on May 3.

Wingle did not play his first year at Bakersfield College but was the primary starter during the Renegades’ 3-7 2019 campaign. Rather than stick around with the Renegades, he parlayed that into a preferred walk-on slot at Fresno State. But when the pandemic hit, he realized he wasn’t in the right place.

“I think it just kind of changed my mind and my outlook on where I wanted to be,” Wingle said.

When Wingle announced his intent to transfer, he quickly connected with Artie Allen, then an assistant at Chaffey, soon to be the head coach at Victor Valley, and Wingle followed him to the High Desert — “I think his style of offense really matched mine and I just think he had good intentions with trying to get me out.”

The Rams had a challenging season with minimal playing time for Wingle, save a cathartic 46-0 win over LA Pierce in which he started and threw for a pair of touchdowns. But the season-long stop helped him build up his film — most of which was from years earlier — and link up with Fort Lewis. He said he was drawn in by the area and the Skyhawks’ coaching staff.

“I think I’ve grown a lot,” Wingle said. “I felt like I’ve gone through every different situation there is, and I’ve been to all kinds of levels of football.”

Turn off the heat: So much for the Highway 99 rivalry. After seven seasons, the Calgary Flames announced May 23 their intent to move the Stockton Heat, their American Hockey League affiliate, up to Calgary, depriving the Bakersfield Condors of their Central Valley foes. The news, which comes with Stockton still competing in the AHL playoffs, represents the latest instance of a Canadian NHL team moving its AHL squad north for logistical convenience, after the Vancouver Canucks brought the Utica Comets up to Abbotsford in 2021. This prompted some speculation about the future of the Condors, who, beginning next season, will have the greatest distance separating them from their parent club of any AHL team. However, the Edmonton Oilers’ president, Bob Nicholson, told the Edmonton Sun last week that the team has no plans to move the Condors and actually prefers keeping its AHL prospects at a distance. The Oilers are in the NHL’s Western Conference Finals right now with recent Condors coaches Jay Woodcroft and Dave Manson at the helm, so the setup seems to be working in Edmonton’s favor.

Oiling the skids: Indeed, after firing coach Dave Tippett at midseason and replacing him with Woodcroft, the Oilers are in the Conference Finals for the first time since the 2005-06 season. The coaching staff isn’t the only addition from the AHL — the current Oilers roster includes prior Condorstown products such as Leon Draisaitl, Ryan McLeod and Jesse Puljujarvi, as well as a slew of recent call-ups like Seth Griffith and goalie Stuart Skinner. All this certainly makes it easier to understand Nicholson’s current favorable disposition toward Bakersfield.

Open season: Three Bakersfield golfers are through to final qualifying for the US Open golf tournament, to be held in Brookline, Mass., beginning June 16. Matt Picanso, a former Stockdale baseball player who picked up golf in college and circled back to it years later on his way to a Korn Ferry Tour spot, shot a 5-under 67 for third place in Lexington, Ky. Fellow Stockdale alum Jared Kinoshita joined Centennial product Manav Shah in making the cut at Bermuda Dunes. The trio became part of a group of 530 top finishers who emerged from a field of 8,880 aspirants. They have another tall task ahead as they angle for the Open — final qualifying begins Monday, with only 61 places remaining in the tournament.

Next best thing: Bakersfield’s own Marlon Vargas has become a key player in one of the nation’s newest soccer leagues, MLS Next Pro. The 21-year-old attacking midfielder, who represents El Salvador internationally, came up through the local Central California Aztecs club team on his way to the Seattle Sounders Academy (a similar path to defender Bryson Hankins, who currently plays at Cal State Bakersfield) . After a quiet first few seasons with the Tacoma Defiance, the Sounders’ farm team, Vargas has come alive to score goals in three straight games this year. The Defiance, which sits in third place in the Western Conference with a 5-2-3 record, has started strong in its move to MLS Next Pro, which has brought together MLS-affiliated teams from other minor soccer leagues. Vargas is taking on a leadership role in the team’s efforts, most recently serving as team captain Tuesday.

Thinking with portals: Many local players who previously announced their entry into the transfer portal are picking destinations; Garce’s product Lexus Green is leaving CSUB for Division I newbies North Alabama, while Independence alum Kahlaijah Dean is going to Sacramento State.

Elsewhere, after a five-year indoor/outdoor volleyball career at CSUB, middle blocker Brooke Boiseau will return to her home state and join Arizona State’s indoor team for her final year of eligibility, a move with some mild rivalry intrigue — as her father Gene put it in an Instagram comment: “Your parents grew up in Tucson, your three older siblings graduated from the University of Arizona, and now you’re going to ASU?!”