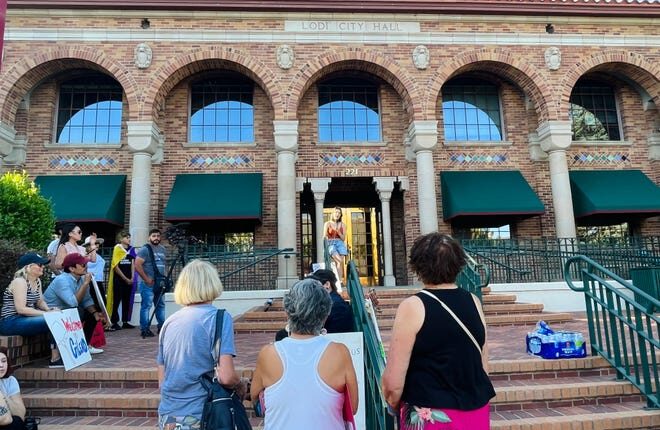 A group of about 60 protestors from teenagers to the elderly, men and women, gathered in front of Lodi City Hall on Friday to denounce the US Supreme Court’s decision to overturn Roe v. Calf.

Vine Sanchez is a youth and a member of the local advocacy group Progressive Unity. He said he began to organize the protest immediately after hearing of the US Supreme Court decision to end the more than 50-year-old constitutional right to abortion.

“I got an email from the National Women’s March asking me to take action and put something together, so I decided to do it,” Sanchez said. “If I didn’t organize anything, there probably wouldn’t have been anything. So it’s like, if not us, then who? It’s up to us to defend our own rights.”

He said the main goal of the protest was to “start a movement locally.” He also said the group plans on “rallying day after day,” not only in Lodi but in Stockton and other parts of the Central Valley, too.

“We want to get more and more people to join us because it’s going to take people seeing our protest like today to get encouraged to come out,” Sanchez said. “They’re going to think, ‘There’s other people who believe what I believe and who are fighting this fight, let me join them.'”

Mady Seibel, 14, said she wanted to protest to honor her late grandmother, who was a member of Lodi’s Breakthrough Project for Social Justice.

“I know with all of this stuff going on right now, she would just be so heartbroken. She would be furious,” Seibel said. “I want to honor her, but I also want to honor myself and fight for myself because I am a woman and this affects all women.”

Seibel said she is grateful she lives in a state like California, where abortion rights are being protected by lawmakers.

On Friday, Gov. Gavin Newsom and the governors of Oregon and Washington issued a Multi-State Commitment promising to defend access to reproductive health care, including abortion and contraceptives.

But Seibel said she is upset for the women who live in the 26 states that are planning to restrict abortion access after the Supreme Court’s decision. She is upset they will no longer have the same rights she does.

“I’m not an adult yet so I can’t even speak my voice politically on it, but going to protests and rallies like this is something that I can do,” Seibel said.

Nancy G. St. Clair, a Lodi Unified School District teacher and a candidate for the District 4 seat on the San Joaquin County Board of Supervisors, also said at the protest.

“We’re very upset about Roe v. Wade being overturned. We don’t believe it’s right that the Supreme Court dictates what women do with their bodies,” St. Clair said. “There are 26 states that are planning to criminalize abortion, so we’re showing up because of that and to support all women’s right to control their own bodies, and all women’s right to make personal health care decisions for themselves.”

St. Clair said she is a board member for A New Lodi, a nonprofit organization that is “focused on improving policies and amplifying unheard voices.” The nonprofit played a key role in organizing Friday’s protest.

“Usually when we have events on the same day, we get a pretty small crowd of people,” St. Clair said. “But today was a great turnout.”

Another protest, organized by PSL Central Valley, another advocacy group, at Stockton City Hall was scheduled for 6 pm Saturday.